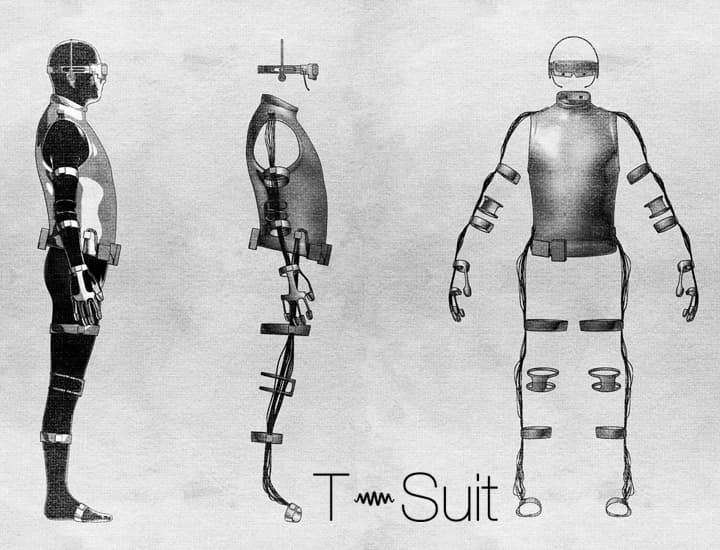 Say "hello" to full body virtual reality suits. Scottish company Tesla Studios—which has no relation to the car company—just announced that parts of their Tesla Suit, a full-body wearable suit that lets you feel physical feedback and manipulate a virtual avatar, will be out mid 2015. Thanks to haptic technology, the suit physically reacts to the actions of the user's avatar while being guided by the movement of the wearer. And best of all, the suit will work with smartphones, PCs, and gaming consoles.

Of course, technically speaking, the Tesla Suit isn't exactly a suit but a series of sensors that allow the user to feel the sensation of movements in the virtual reality space (including things like changes in temperature). Different wearable accessories, called modules, are available separately. The modules include the T-Belt, the T-Glove, and a jumpsuit known as the "Smart Textile." However, when added together, they function like a suit.

Real time reaction to motion is made possible because the modules can speak to one another over Bluetooth; however, all modules are totally independent. So, for example, if you're only looking to move your hand in cyber space, you'll only need the T-Glove.

The T-Glove picks up hand gestures and applies force back. By turning your hand into a controller, the T-Glove allows you to interact with computerized worlds like something out of a science fiction novel, and just by flicking your fingers, you could carry out a multitude of real time commands in cyberspace.

The belt detects temperature, motion, the state of your muscles, and posture. In addition to this, the T-Belt can also stimulate sensation with electrical nodes able to "massage" your skin. It can even send sound waves through your body, just in case you wanted to blast yourself with music vibrations.

If you're wearing the Tesla Suit, electrical impulses will handle the rest of the stimulation. Sensations are made possible by more electrical nodes embedded in the jumpsuit's textile. The shocks can apply heat and electricity that can be soothing or intense. Sensations could electrically imitate the force of being punched in the chest or the tingle of tropical water (as an aside, the name seems fitting, given the reliance on controlled electric shocks and  Nikola Tesla's interest in electricity).

The Tesla Suit hopes to take gamers to the next level. Enthusiasts from the gaming community are also in the cross-hairs of virtual reality headsets like the Oculus Rift and Sony's Project Morpheus—devices that will likely be compatible with the Tesla Suit. However, the tech is still under development, and as is true of all new creations, the market will really determine what becomes the next, great fad. Still, it is an awesome step forward.