Video Proves You Can Safely Stick Your Hand in Liquid Nitrogen 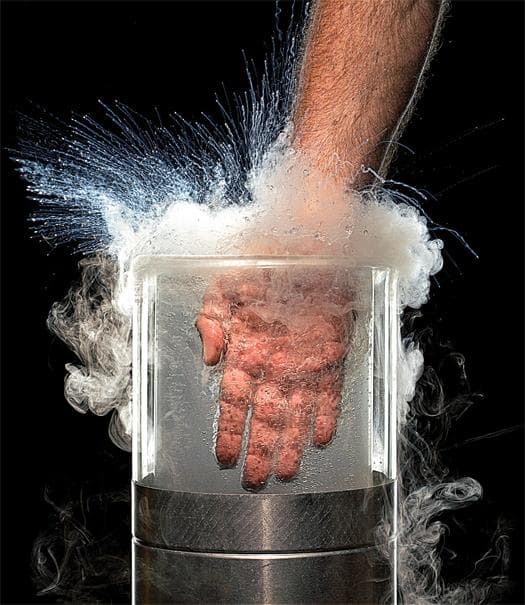 Liquid nitrogen is incredible. It is known as one of the world's coldest substances—able to instantaneously freeze and shatter nearly anything that it comes into contact with (including the human hand). The substance has this amazing capacity because it exists in liquid state at an extremely low temperature. It boils at a staggering −195.8°C (−320.4°F). And it doesn't freeze until it reaches −210 °C (−346 °F). That means that liquid nitrogen exists between -196 and -209°C  (-320 and -345°F). That is amazingly cold. Cold enough that you definitely don't want to put your hand into liquid nitrogen for any length of time. However,  if you know what you're doing, you can safely stick your hand in it for the briefest of moments.

PopSci's Theodore Gray put this theory to the test, and he submerged his hand in liquid nitrogen in the name of science. The result? He felt a little cold... The key is, Gray's hand was only under for a split second. The principle that kept his hand from freezing solid is the same one you see in action when water droplets fall onto a scalding hot skillet—rather than evaporating immediately, they bounce around on a thin layer of steam. The same process (called the "Leidenfrost effect," after Johann Gottlob Leidenfrost, the doctor who first studied it in 1756) prevented Gray's hand from getting significant damage (indeed, from getting any damage at all).

When you stick your hand into the sub-zero nitrogen, a layer of protective gas (evaporating nitrogen steam) blocks your hand from the cold liquid nitrogen. Of course, pull your hand out a little too slowly—give the bubbles enough time to evaporate—and you will have a frozen hand-kabob to deal with. So we can't emphasize this enough, do not try this at home...