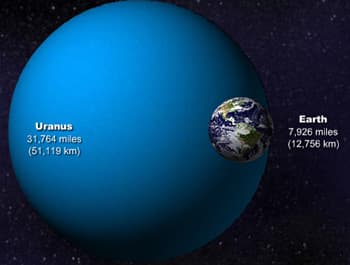 Uranus is by far one of the most interesting planets in the solar system, despite its tragically immature name. It is the first planet discovered in modern times, as you can only identify this planet with a telescope or powerful-ish binoculars. It is classified as an Ice giant, as it's so far away from the Sun that its atmosphere is partly frozen. Additionally, this planet is actually named for a Greek god (it is the only planet in the solar system not named after a Roman god).

Oh, and one more quirk: Uranus spins on its side.

Unlike every other planet in our little family, Uranus doesn't spin, but horizontally. For half of its 84.3 Earth year orbit, its North Pole is pointed almost straight at the Sun. The other half of its orbit, its South Pole is bathed in constant sunlight. Uranus has an axial tilt of 98 degrees. To put that in comparison, the Earth’s axial tilt is 23.5 degrees and Jupiter has a 3 degree axial tilt. Something must have happened to Uranus early in its life to make it spin so oddly.

Up until recently, it was believed that, early in the Solar System’s life, Uranus was hit with a protoplanetary object a few times the Earth’s mass and knocked it on its side. At the European Planetary Science Congress and the American Astronomical Society in France a new study was given where impact scenarios were calculated. Way back when Uranus was still surrounded by a protoplanetary dust field, spinning in a disk around the planet where its moons would eventually form, astronomers computed one major collision with the planet. The good news is that Uranus would survive the collision intact and would even be tilted to the extreme angle it’s at today. Even more good news is that the protoplanetary dust that was in a ring would reform as a doughnut around the planet’s new equatorial plane, rotating vertically around the planet just as they are today. The bad news? The moons would form in a retrograde orbit, meaning they would have to orbit the planet differently than they actually do.

On October 6th of this year, scientists unveiled to the EPSC and the AAS a new, but only slightly tweaked, theory. Instead of one giant impact slamming into the planet, they proposed a series of smaller impacts; at least two impacts of about earth massed objects hitting the planet just enough to knock the planet off kilter just a little each time, but not enough to disrupt the orbital paths of the planet’s future moons.

Early Uranus must have been a very dangerous place to be...if you were standing on it...if you found something to stand on. Not just once, but at least twice a massive impact occurred on this planet. Quite a rough childhood for Uranus, and now in its adulthood but is still the butt of so many fart jokes.