The Universe is Brighter Than Previously Thought 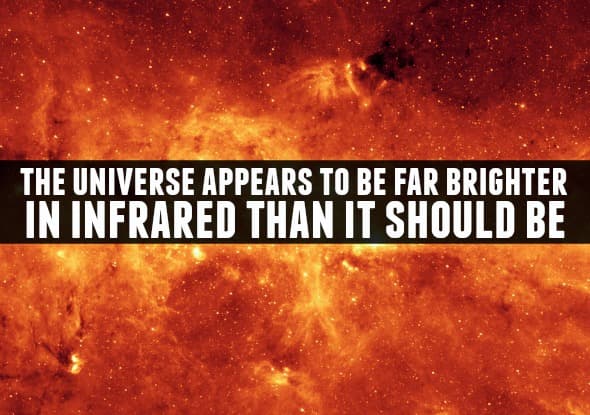 NASA is revolutionizing the way we define galactic boundaries. New results from one of the agency's sounding rocket experiments has observed an unexpected excess of infrared light between galaxies, where we would normally find dark spaces. This cosmic glow is predicted to be emitted from ejected stars and is extremely bright. These new findings could change how we perceive galaxies. Currently, galactic boundaries are defined by a specific set of stars, but these new results could mean these borders extend far beyond those stars.

"It is wonderfully exciting for such a small NASA rocket to make such a huge discovery," said Mike Garcia, program scientist from NASA Headquarters. “Sounding rockets are an important element in our balanced toolbox of missions from small to large.”

NASA's Cosmic Infrared Background Experiment (CIBER) is helping investigate the source of the infrared light, which was first detected by the Spitzer Space Telescope. CIBER employs suborbital sounding rockets, much like the ones that ferry satellites into orbit. These rockets are ideal for brief experiments, and enabled CIBER to capture wide-field images of the cosmic infrared background (CIB). Due to atmospheric interference, this type of experiment has to be conducted from space. From its orbital vantage point, CIBER was able to observe the CIB at two separate infrared wavelengths - both shorter than the Spitzer observations.

"We think stars are being scattered out into space during galaxy collisions," said Michael Zemcov, lead author of a new paper describing the results from the rocket project and an astronomer at the California Institute of Technology (Caltech) and NASA's Jet Propulsion Laboratory (JPL) in Pasadena, California. "While we have previously observed cases where stars are flung from galaxies in a tidal stream, our new measurement implies this process is widespread."

Much to the surprise of the researchers, the maps showed an abundance of excess light beyond what would be produced by galaxies. Data also indicates the light is produced by a population of stars hiding out between galaxies. This previously undiscovered stellar group's light is in the blue spectrum, meaning shorter wavelengths. If this light was produced by some of the universe's first galaxies, it would be in the red portion of the spectrum.

"The light looks too bright and too blue to be coming from the first generation of galaxies," said James Bock, principal investigator of the CIBER project from Caltech and JPL. "The simplest explanation, which best explains the measurements, is that many stars have been ripped from their galactic birthplace, and that the stripped stars emit on average about as much light as the galaxies themselves."

More observations are needed to fully determine that these stars are indeed the source of the cosmic glow. Even though they were kicked out of their home galaxies, theoretically they should still be in the same vicinity as the original galaxy. CIBER is working to develop technologies that will be able to test in more infrared wavelengths, and hopefully determine how these stars are ejected.

The CIBER findings will be published in the Journal Science on Nov. 7.