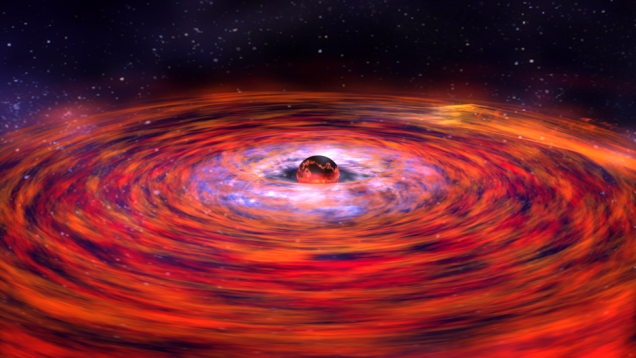 You  have almost certainly heard of quasars, white dwarfs, neutron stars and their counterparts; pulsars. However most don't know anything about the grouping of stars that are called 'blitzars.' They are every bit as weird as the star-types listed above, only they are seemingly much more complex. You see, blitzars can be likened to celestial lighthouses. Yet instead of beaming out near constant emissions of light or radiation, they shoot sporadic beams of pure radio waves out into space. Until recently. we had no freaking idea what they were, how they form, or why this radio wave activity occurs.

A theory has been put forth that better explains some mysterious radio bursts (fast radio bursts [FRBs]) , now attributed to blitzars, that appear to have come from another galaxy. These extremely powerful bursts, which can generate more energy in mere milliseconds than the Sun does *in over 30,000 years, have been spotted several times, but only now has a workable explanation finally come to light  thanks to a couple of new(ish) studies. The newest one has seemingly put to bed one theory about these energetic events.

According to Heino Falcke (an astrophysicist from Radboud University Nijmegen) and Luciano Rezzolla (from the Max Planck Institute for Gravitational Physics), these brief blimps of pure radio waves are created in a HIGHLY unusual manner -- when a neutron star dies and its magnetic field snaps.. 'like a rubber band'. This would essentially make them unlike anything we've ever seen before. (With weird physics to boot)

How could such a thing happen? Well, per their hypothesis, following the core collapse of the massive star in question,

weird.  account for the radio flashes, as any other wavelength emitted would fall into the black hole created as the star dies.

WHERE IN THE UNIVERSE:

Their research centers on four recently detected blitzars. Interestingly, the 'blitzes' they noted were so brief (lasting a mere few thousandths of a second) and appeared as if the sources were billions of light-years distant, it's a wonder that the bursts of activity were noted at all. This is just a testament to how incredibly powerful said radio bursts are.

Anyway, when studying the four sources of the high-energy radio bursts, not only did they think they had pinpoint the location in which the sources can be found, but they allegedly deduced that some of the weirdness stems from residual dilution during the journey from  the emissions get heavily diluted during their journey from their respective locations to our corner of the universe. This, in essence, accounts for some of the weirdness. Alas, it wasn't to be.

It may be that one such blitz happens once every 10 seconds or so, or some 10,000 times a day, but that can not be confirmed unless we launch specialized telescope tools that can survey every facet of our sky at radio wavelengths. However, like a lot of things in science, this may just be a plausible theory and nothing more. We can't say definitively, as there are other possible explanations still flying around!

*Editor's Note:* The numbers on just how energetic they are compared to the sun varies wildly, ranging from 30,000 years to a million.