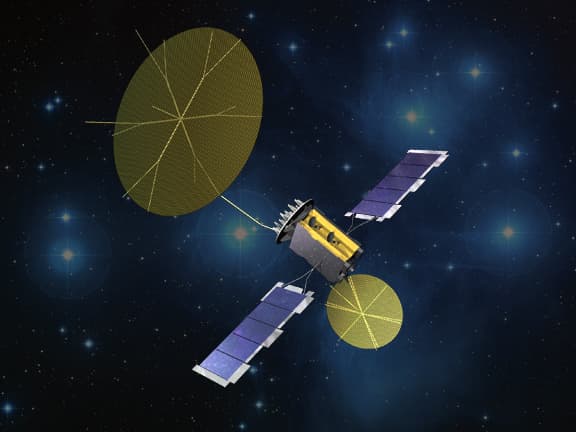 The MUOS satellite family is a fleet of geosynchronous satellites deployed on behalf of the U.S. Department of Defense (DoD). Tonight’s flight will deliver the third of five planned MUOS satellites to orbit. These satellites are designed to provide narrow band connectivity at a rate of 384 kilobytes per second. MUOS is a Ultra-High Frequency (UHF) system transmitting in the 300 MHz to 3 GHz frequency range and designed to replace the current UHF Follow-On (UFO) satellites.

Together, the five MUOS satellites will offer improved mobility, accessibility, and capacity. Their primary use will be with mobile platforms, such as vehicles, aircraft or ships at sea. MUOS satellites are capable of relaying voice transmissions, video or data beyond line of sight. The MUOS fleet will consist of four operational spacecraft along with an on-orbit backup.

MUOS is a key provider of communications for troops in the field, ensuring they have the cell phone capabilities they need. The communication system will use this fleet of geosynchronous satellites instead of traditional cell towers. By utilizing this fleet of satellites, troops will be able to receive service even in the most remote jungle locations.

“MUOS is a game changer in communications for our troops and will allow them to have high-fidelity voice conversations, networked team calls and data exchange, including video, with anyone connected to a secure terminal around the world,” said Lockheed Martin’s Vice President of Narrowband Communications Iris Bombelyn. “The launch of MUOS-3 will increase our network coverage to about three-quarters of the globe.”

As noted, MUOS-3 will piggyback on the most powerful Atlas booster, the mighty 551 configuration. This configuration features a 5.4-meter payload fairing (PLF), five Aerojet Rocketdyne AJ-60A solid rocket motors or “SRMs”, and a single Aerojet Rocketdyne RL-10A engine in its Centaur upper stage. The MUOS-3 spacecraft was delivered to Cape Canaveral on Nov. 6 2014, and subsequently encapsulated into the Atlas V Payload Fairing on Dec. 19.

ULA's live broadcast of tonight's launch will begin at 7:23 p.m. EST and you can watch it here.