Trends in Star Formation: When Will the Universe Run Out of Fuel For Stars? 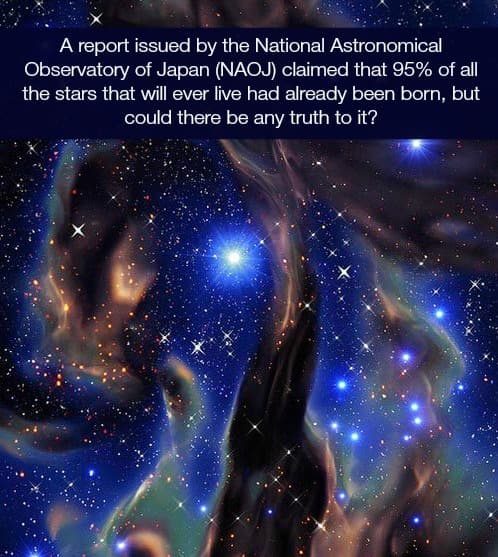 Last year, an international team of astronomers, led by David Sobral from Leinden University of the Netherlands, used three telescopes located across the globe to study the trends in star formation, from the earliest stars that made up the first galaxies in the universe, up until now. Their findings suggest something on the surface that sounds quite shocking .. almost 95% of stars that will ever live have already been born! Before you get too worked up...let me explain their findings and how they came to them.

Over the course of the last several years, several separate studies have taken place where scientists looked at specific time "epochs" of star formation in the universe, but since different methods and equipment were used by various entities, the ability to compare and critique the results from each of the studies has largely proven to be very difficult. As has developing a "complete" model of the stellar evolutionary process as it has progressed over the past 13 billion years.

However, the combined results of these studies has made a few points very clear. First, they were able to determine how many stars were formed in the past and they were also able to predict how many stars that should exist now as the universe has aged. Second: "Independent assessments of this quantity seemed to indicate that such a heterogeneous mix of measurements greatly overestimated the quantity of stars in the Universe."

Instead of comparing the data collected from various organizations, the team decided to develop one robust method that would make the process much easier and far more accurate. Using the combined power of various telescopes including the UK Infrared Telescope, the Subaru Telescope and ESO's Very Large Telescope, they took measurements of hydrogen H-alpha emission lines, which happens to be a pretty reliable method of tracking star-formation activity. Most stars are composed primarily of hydrogen and after all, it is the most abundant element in the universe.

Keep in mind that we can see the universe has evolved by studying some of the most distant stars and galaxies. Light travels at a finite speed across the vacuum of space. If we look at say, our closest cosmic neighbor, the Andromeda galaxy, which is about 2.5 million light-years from Earth -- we are looking at the galaxy as it appeared over 2.5 million years ago, which is how long it took the light from the stars in the galaxy to make its way all the way to us. The same can be said for galaxies farther than Andromeda and even stars within our own galaxy. In fact, it takes 8 minutes for the light from the sun to travel from the sun's surface to your bedroom window each morning. Telescopes are time machines in a sense.

With that said, Maximizing the full capacity of the telescope's combined power and their filters capable of seeing light at different wavelengths, the team was able to collect the largest sample of deep space images from various times in the universe's 13 billion year history. What they found.. is that the number of stars being produced has been steadily declining over the past 11 billion years. Furthermore, it is about 30 times lower at this very moment than it was at its peak about 11 billion years ago. They surmised that if they trend steadily continues, no more than 5% additional stars will be produced in the future.

Apparently, they believe their findings reconcile some of the previous findings that confirms the notion that the universe may be winding down on the number of stars that are being born. Sobral explains:

"If we use our consistent measurement of the star formation history of the Universe to predict the number of stars that should exist across cosmic time, then the numbers are a perfect match to what is actually seen. The two measurements can finally be reconciled. Half of the stars that currently exist in the Universe were formed more than 9 billion years ago in less than 2 billion years, while after that, it took the Universe almost 5 times as much time to produce the same quantity."

Sobral hopes to continue searching for an answer to the question all of us are surely thinking.. WHY is there such a large gap in the number of stars consistently being born compared to the universe as it existed over the past 2 billion years of its lifespan? It's also only fair to point out that if the conclusion the team came to is truly correct, the last star the universe develops will still be billions of years from now... long after our sun has fused the last of its hydrogen into helium and transitioned to a red-giant to a white-dwarf. Scientists predict that the less massive counterparts to orange-dwarfs like our sun, red-dwarfs -- can reasonably be expected to live hundreds of billions (or up to a trillion) years into the future. So stars in the universe will continue to shine in the distant future.

As one last point of contention here in closing. As far as I can tell, these findings are controversial and even I personally have a hard time accepting the conclusion. Most of the galaxies we've spotted (including our own) have several starburst regions where new stars are being concocted. Most of those regions are plentiful since galaxies and even satellite galaxies are constantly merging together, sending large quantities of hydrogen in dense clouds together to form massive balls of plasma like the sun. The same will happen to the Milky Way galaxy when Andromeda ultimately collides with us sometime after the demise of our solar system. As long as there is a large quantity of gas present in the universe, there will be new stars being formed, but we also must remember that eventually, be it the big rip or the big freeze, the lights in the universe will go off for the last time. It's the "when" and the "how" that are still being debated.