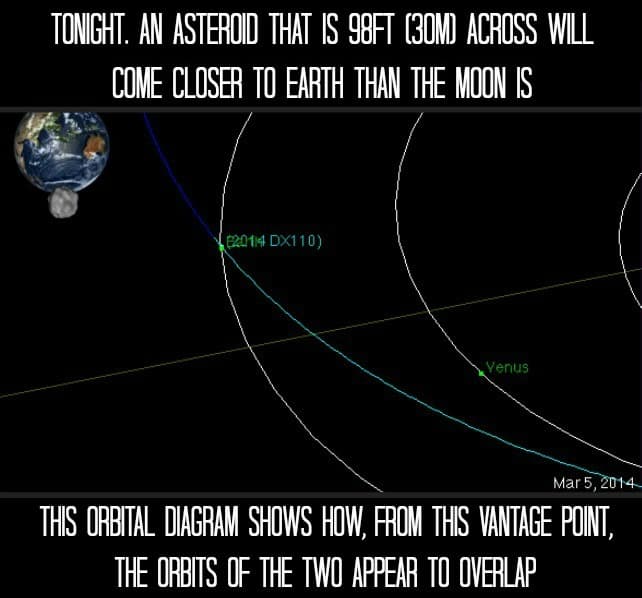 Tonight, 2014 DX110 will grace skywatchers with its presence. The near-Earth asteroid, which is approximately the size of three double-decker buses, will come within 217,000 miles (350,000 km) of Earth; essentially meaning it will be closer to Earth than the moon is (it will come about 9/10th's of the distance separating the Moon and Earth)

The relatively close distance, along with the fact that it crosses into orbit between the Earth and Moon, technically make the asteroid belong to the Apollo class of Near-Earth objects. More than 5,700 known asteroids belong to this class (approximately 62% of all cataloged near-Earth objects). Among those, approximately 2,000 come in with a diameter exceeding 1 kilometer (0.62 miles). The most notable of which, 1866 Sisyphus, is one of the largest and most dangerous near-Earth asteroids on record. In 2071, it will come within 0.11581 AU of Earth's surface. If it winds up striking Earth, the damage it could inflict might be catastrophic -- akin to the collision that wiped out the dinosaurs in the Cretaceous–Paleogene extinction event.

Furthermore, it has previously been suggested that the meteor that exploded over Russia last year was a broken-off-fragment of an Apollo asteroid. Scientists came to this conclusion based on its estimated trajectory, but such assertions can not be verified if, or until, any rock fragments are recovered (this task is more daunting than it sounds).

You can find additional information about the project, along with the live feed, here.