With a VR rig and a backpack-mounted camera, you can experience life from a third person view — like a video game character. 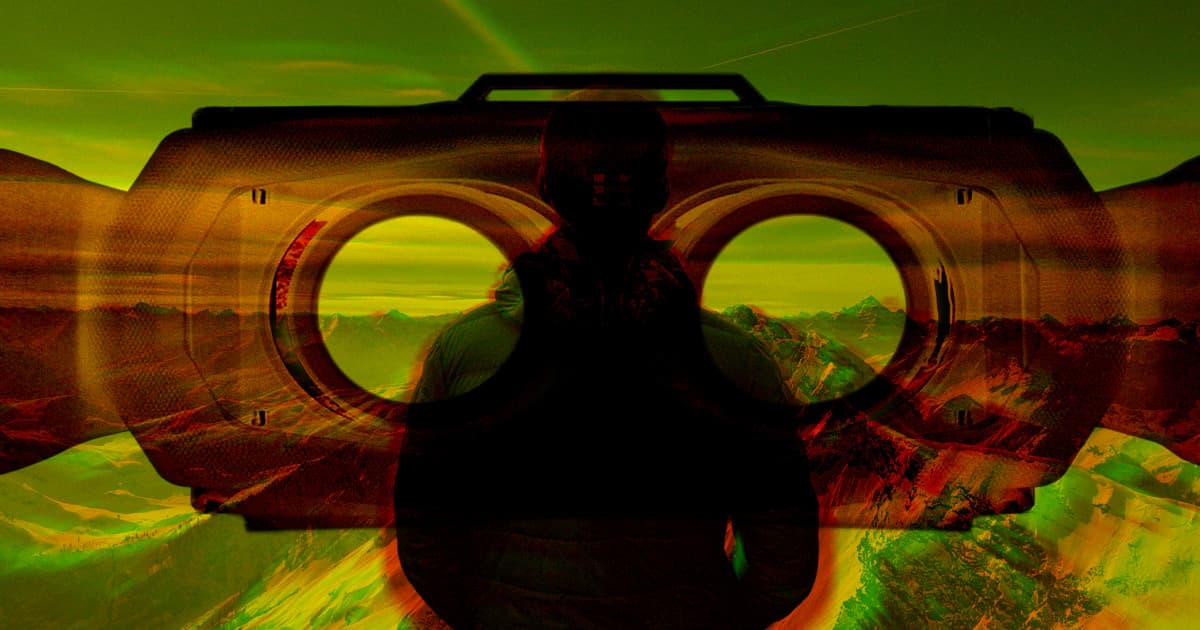 Earlier this year, an intriguing meme made the rounds online. It depicted a young man wearing a virtual reality headset and a backpack to which someone had mounted a pole and what appeared to be a small camera.

"Man lost a bet and had to live life in the third person for a day," it read. "Brutal."

It was an evocative image, open to interpretation. Perhaps the man's stature was self-assured. But at the same time, something in his hand's tenuous grip on a railing suggested profound disorientation, either physically or philosophically. It invoked questions about what it would actually be like to watch yourself from an over-the-shoulder view, a perspective familiar to anyone who's played "Grand Theft Auto" or Nintendo's iconic 1996 platformer "Super Mario 64."

We weren't able to track down the gentleman depicted in the meme, but it turns out that over the years, various hobbyists have used VR rigs and cameras to experience life in the third person.

As it turns out, watching yourself from behind can be unwieldly and even unsettling in real life — but, at the same time, surprisingly intuitive.

In July, for instance, a YouTuber named Austin Evans posted a video in which he assembled a desktop computer in third person, watching himself complete the build from the viewpoint of a GoPro camera that he had mounted to a backpack, giving him a game-like view of the task over his right shoulder.

"The actual experience was kind of natural," YouTube Austin Evans told Futurism. "But you have those moments where you have latency, or you have depth perception or you're trying to find something on the floor."

That almost-imperceptible delay in the video feed, Evans said, caused waves of nausea.

"It's really trippy when you reach for something and you see your hand grab it a tenth of a second later," he said. "It was a real trip to get used to your head being in the way. And you have to look around the world, not with your head, not with your eyes, but with your shoulders. It was a very disorienting experience."

But the primary challenge, Evans said, was logistical. Instead of grappling with the existential horror of operating a human body like a video game character from an outsider view, Evans said that his main struggle was that his own head often blocked his view of the task he was trying to perform — tasks that in a typical third-person video game might be as simple as pushing a button or tilting a joystick.

Getting used to those challenges, he said, took so long that he stayed in VR longer than he needed so that he wouldn't have to reacclimate.

"When we took breaks for filming, I didn't want to take the headset off because I didn't want to disorient myself," Evans said. "It was really draining. Even when it was running well, I felt like my brain was running at overdrive to constantly correct for where my hands were. I had to think about every little thing for hours."

James Orgill, a personality behind the YouTube channel The Action Lab, uploaded a segment in April in which he drove an entire car using a homebrewed third person VR rig. The new perspective, he said, took some getting used to.

"It didn't feel like someone else's body," Orgill told Futurism. "It's still felt like myself. That is what was interesting is that it just felt like my eyes were in a different spot."

Virtual and augmented reality, suffice to say, are technologies dominated by idealistic promises and underwhelming accomplishments — just look at Magic Leap's astonishing fall from grace after delivering a mixed-reality headset that was obviously far less impressive than what the company advertised. As such, it's difficult to imagine mass-market demand for VR rigs that let you live life in the third person.

Still, several people have already attempted to monetize the concept. Evans, for instance, helped rig up a similar system to Orgill's in order to film an advertisement for Castrol motor oil in 2015. But he said that the virtual environment rendered in the commercial was vastly cooler than what the driver actually saw, which looked more like a simple videogame.

And Bartosz Barlowski, founder of the VR company Mepi, pulled together a similar third-person rig as Evans in 2014 and was impressed, telling 3DPrint.com that he could envision commercial applications for such a system.

Barlowski hinted to Futurism that he was still working on new and improved setups, but declined to elaborate.

It's worth noting that at least one application Barlowski mentioned to 3DPrint.com, enhanced cameras and sensors for cars, has already reached the market. In 2008, Nissan deployed the Around View Monitor, a system that animates a bird's-eye view of your car while you parallel park.

But for most people who have dabbled with living life in the third person, it's more just an opportunity to tinker with an emerging technology.

"It was a fun project — I don't know how we're going to follow it up," Evans said. "It was a very unique challenge. It got us thinking in ways that we don't usually do."

More on virtual reality: I Tried a VR App Meant to Replace Offices, and It Was Glorious

Read This Next
Be Afraid
Facebook Locks Down Patents for Full-Body VR Tracking
Futurism
Intel Announces Deal to Bring Virtual Reality Tech to the Olympics
Futurism
We'll Have "Minority Report" Human-Computer Interactions in 5 Years
More on Enhanced Humans
Brain Transparency
Feb 3 on futurism
Duke Professor Welcomes the "Promising" Future of Employers Reading Your Brain
Brain-Computer Im...
Jan 3 on the byte
Neuralink Cofounder Says New Company's Eye Implant Could Be "Ultimate" VR Tech
Eyes Have It
12. 30. 22 on futurism
Meet the Neuralink Cofounder Who Left and Started a Competitor That's Now Rapidly Catching Up
READ MORE STORIES ABOUT / Enhanced Humans
Keep up.
Subscribe to our daily newsletter to keep in touch with the subjects shaping our future.
+Social+Newsletter
TopicsAbout UsContact Us
Copyright ©, Camden Media Inc All Rights Reserved. See our User Agreement, Privacy Policy and Data Use Policy. The material on this site may not be reproduced, distributed, transmitted, cached or otherwise used, except with prior written permission of Futurism. Articles may contain affiliate links which enable us to share in the revenue of any purchases made.
Fonts by Typekit and Monotype.