The FLIR ONE puts thermal imaging in the palm of your hand. 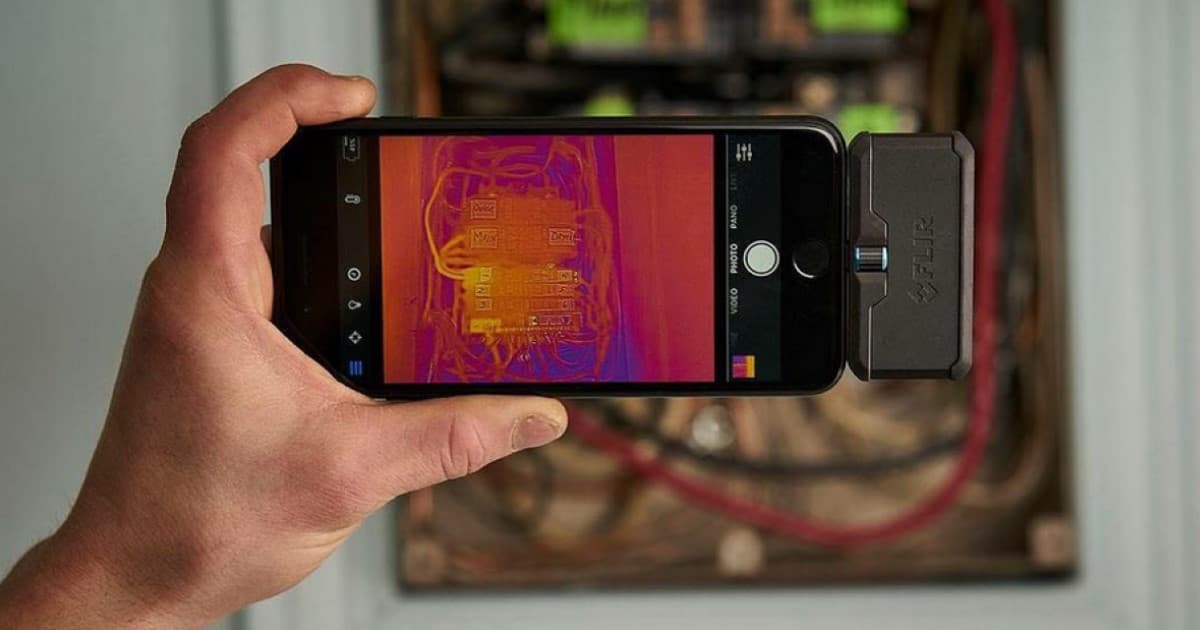 Many of us take it for granted that our smartphones can do just about anything. But even in the age of augmented reality, there’s a whole universe around you that you can’t be privy to with a standard smartphone. But with a FLIR ONE or FLIR ONE Pro attachment, you can turn your phone into a thermal camera and unlock the power of thermal imaging and its myriad practical applications.

A FLIR ONE thermal camera attachment in conjunction with the FLIR app can turn your phone into a cutting edge piece of thermal imaging technology. If you’ve seen Predator, watched The Mandalorian, or played any number of video games that feature thermal vision, you’re probably familiar with the concept. But you may not realize just how many practical things you can do with a FLIR ONE thermal camera module.

Thermal imaging can be used to locate household water or insulation leaks, electrical issues, and other problems around the house. With a FLIR ONE attachment, you can find and fix problems like this with relative ease, compared to the naked eye. Ever lose a pet in the middle of the night? With a thermal camera, you can spot "Spot" or even shy wild animals that instinctively flee human beings in pitch darkness.

Finding pets and making household repairs are only two of the most practical uses for a FLIR ONE thermal imaging attachment. If you’re a creative type, you’ve probably already begun to consider the kinds of artistic uses you could find with thermal imaging. And using it as a way of simply looking at the world around in a different light can serve as a very potent creative inspiration. If you have kids, you can take those creative applications and compound them exponentially. It also makes a potentially integral part of an early education in several different scientific concepts.

The FLIR ONE Pro (IOS And Android)

The FLIR ONE is ideal for anyone looking to explore the multitude of uses for thermal imaging for the first time. But if you’re a professional, you’ll probably be more interested in the FLIR ONE Pro. Put simply, it can do everything the FLIR ONE can do, but better. It has a maximum native resolution of 19,200 pixels and an array of programmed measurement tools. It can also capture an expanded range of temperatures up to three times higher than any other FLIR ONE product — up to 752 degrees Fahrenheit.

Both the FLIR ONE and FLIR ONE Pro brings the power of heat vision to your smartphone. And the possibilities are almost limitless. So if you’re ready to expand your smartphone’s field of vision beyond the visible spectrum, head to the FLIR online store and get your device, now.

Read This Next
Brands We Love
Trade in Your Annoying Cords for a Stylish High-End Wireless Charger
Brands We Love
This Stylish High-Tech Clothing Offers EMF Protection From Modern Electronics
Brands We Love
This Simple Attachment Turns Your Phone Into A High-Tech Thermal Camera
Brands We Love
This Thermal Imaging Smartphone Attachment Provides "Predator" Heat Vision
Brands We Love
This Amazing Noise Cancelling App Mutes Distractions on Both Ends of Your Call
More on Hard Science
Warped Tour
Feb 2 on futurism
Professor Believes Door to Warp Drive May Lie With Ethylene Glycol
Sky Bursts
Feb 2 on the byte
Astronomers Intrigued by 25 Mysterious Repeating Radio Signals From Deep Space
Tractor Beam
Jan 26 on the byte
Scientists Build Working Tractor Beam, Although It's Comically Tiny
READ MORE STORIES ABOUT / Hard Science
Keep up.
Subscribe to our daily newsletter to keep in touch with the subjects shaping our future.
+Social+Newsletter
TopicsAbout UsContact Us
Copyright ©, Camden Media Inc All Rights Reserved. See our User Agreement, Privacy Policy and Data Use Policy. The material on this site may not be reproduced, distributed, transmitted, cached or otherwise used, except with prior written permission of Futurism. Articles may contain affiliate links which enable us to share in the revenue of any purchases made.
Fonts by Typekit and Monotype.