The Year We Turned Off Niagara Falls 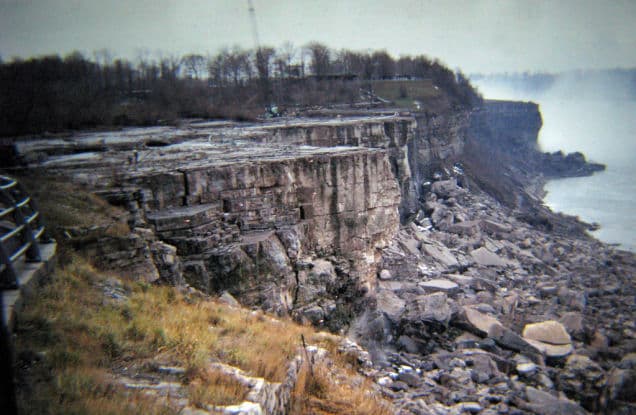 Niagara Falls is one of the most famous waterfalls in the world. Every minute, millions of gallons of water trickle over the rocky ledge spilling into the torrential gorge below. About 750,000 gallons fall each second, by most estimates—equaling about 3,160 tons! It may not be the tallest falls in the world, but it has some of the fastest flowing rapids and is definitely one of widest.

What most people don't know is that Niagara Falls actually consist of two falls: the famous Horseshoe Falls (named as such because of its “U” shape) and the slightly smaller American Falls.

Here is a photo of what the American Falls usually looks like:

And this image shows how the falls looked in the fall and winter of 1969:

Notice the lack of water? If so, you may wonder what natural disaster impacted water levels, or whether a giant sinkhole opened up, and all the water was transported to the other side of the planet. In reality, neither happened (and the second couldn't happen, just so you know).

The truth is, decades back, we decided to “de-water” the falls over fears that rampant erosion—a natural consequence of fast flowing water—destabilized the cliffside too much. The United States Army Corps of Engineers (USACE) then conducted a geological survey of the rock face to determine just how serious the erosion issue was.

During the study, the riverbed and shale was drip-irrigated, and long pipes were stretched across the gap to ensure moisture levels remained on point. Researchers removed undesirable mosses from the rockface and drilled test-cores to search for instabilities. In order to keep tourism up, a temporary walkway was installed just twenty feet from the edge of the falls. This allowed people to explore the (ordinarily inaccessible) American Falls; Individuals could walk on the ledge and stand where millions of gallons of water usually flowed.

It was an engineering feat of epic proportions, and these images are a reminder of the amazing power of technology—it can reshape the surface of Earth and turn off some of the strongest falls in the world. But despite this amazing feat, nature will eventually win. For example, we may be able to turn off a waterfall, but there is no way to turn off erosion (unless, of course, we essentially remove nature from the equation, and switch   normal rocks out with some super resistant surface).

Have a photo of Niagara Falls you want to share? Send it our way here.