The Wild and Wonderful World of Ants 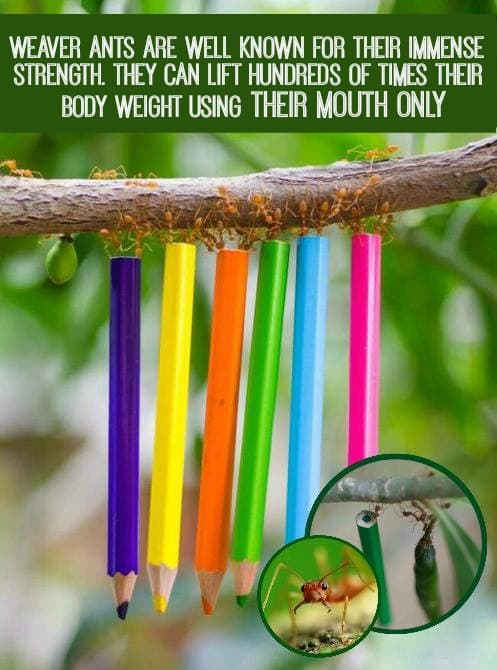 Your every-day, garden-variety ant might seem like the least intimidating specimen known to to man, but one thing is for sure: for such small creatures, they are extremely dynamic. Many exhibit a plethora of strange and wacky characteristics. Here are some interesting facts about the coolest ants in the animal kingdom:

Honey-Pot Ants Have Quite the Sweet-Tooth:

In perhaps the most bizarre entry, honey-pot ants are known for over-indulging. More precisely, they turn themselves into living "honeypots" through the consumption of copious amounts of honey and nectar. The gluttonous creatures eat so much, their abdomens become grotesquely swelled-up and deformed, but that's not even the worst part. When they are through, they travel back to the colony and regurgitate (or vomit) the sweet substances into the mouth's of worker ants. ( fun fact: in Australia, honeypot ants are considered a delicacy)

I'm not sure Christopher Robin would approve, but biologists posit that honeypot ants have become nectar incubators out of necessity. Because the colonies tend to reside in deserts (and other dry regions), the terrain is much too difficult (and dangerous) for all of the worker ants to venture into. So certain ants, called repletes, take on the task of collecting enough for everyone.

They often take in so much, their swell up to the size of a grape. This, of course, limits mobility. So these ants essentially live for the betterment of their colony. (Perhaps there is a lesson we can take from this?)

This brings us to:

A few years ago, the wife of an Indian scientist spilled some milk in her garden. Sounds inconsequential, but she soon learned that the ants who lapped up the spilled milk went from a translucent to a milky-white color.

This gave her husband an idea for an experiment: He put artificial food coloring in sugar water with a paraffin base (to keep the liquid from spreading evenly on the surface) and watched as the typically-translucent shells morphed into a rainbow of colors.

His experiment also revealed something else: that the ants seem to favor some of the colors over the others (despite each station being identical in composition). Apparently, they gravitated toward the yellow and green sugary drops above all else, while they had very little interest in the drops with a green/blue hue, yet it's unclear why.

Weaver ants get their name from their penchant for gathering and weaving themselves into a living tapestry.  They do this by creating "chains" from their interconnected legs, which they then use to position materials, like leaves and twigs, into tent-like formations. Once in place, they secure their nests by using their larvae as a metaphorical knitting needle to produce silk. The silk is then essentially used as the thread that allows them to weave and mold their nests among the treeptops.

As interesting as that all is, the coolest aspect of the weaver ant is its Hulk-like strength. Despite being small, the creature can lift objects that are hundreds of times heavier than it is. Oh, and did I mention, it does all the heavy-lifting with its MOUTH alone?

One Vietnamese photographer set out to test the outer-limits of their strength in the back-yard of his parent's home. He began with chili peppers and other kinds of food, leading up to things that are much heavier, like:

Yes. That's right. Weaver ants can hoist up pencils with their powerful jaws.  According to Thanh Ha Bui, For an average person, this is roughly equivalent to carrying more than 19,000 lbs (or maybe a huge whale) with your teeth (dentistry bill ignored).

You Don't Want to Mess With a Bullet Ant:

Based on the name alone, one shouldn't have a difficult time figuring out why the bullet ant is a commendable foe (and it has nothing to do with lightning-fast reflexes). Simply put, the sting of one of these creatures is comparable to a bullet wound; once stung, the afflicted experiences "waves of burning, throbbing, all-consuming pain that continues unabated for up to 24 hours".

It's no wonder that the stings take the number one position on the Schmidt Sting Pain Index (a scale formulated with the sole purpose of describing the sensation of Hymenopteran stings). Thankfully, these vicious ants can only be found in select regions world-wide, mostly in the rainforest between Nicaragua to Paraguay.

As an unrelated (but fascinating) side-note: In one particular region, a tribe has an unusual rite-of-passage that involves not one bullet ant, but hundreds, maybe even thousands, of them. As an initiation ritual, tribe elders go out into the jungle and capture a whole colony of bullet ants. They are drugged and woven—stinger-up—into specially-made gloves, which are placed on the hands of children usually no older than 13.

As the ants wake up from their drug-induced slumber, many of them become more agitated than usual, thus they are prone to stinging. After ten excruciating minutes (maybe longer), the gloves are removed, leaving behind dozens of red-hot, agonizing sting wounds. In the aftermath, the hands are essentially paralyzed (at least temporarily), thanks to the nature of the bullet ant’s neurotoxins, but that isn't marginally helpful because the pain just gets worse and worse. The children are encouraged to mask their pain by doing ritualistic dances, but if they show even a semblance of discomfort, they are forced to do it all over again.

Even worse, the ritual doesn't just happen once, twice, or three times, but TWENTY. Only then is the passage from childhood to adulthood complete.

And you thought buying your first car was a big step toward becoming an adult.

Think this was interesting? Learn all about the zombies of the ant kingdom here.