The Weight and Workings of a Neutron Star: 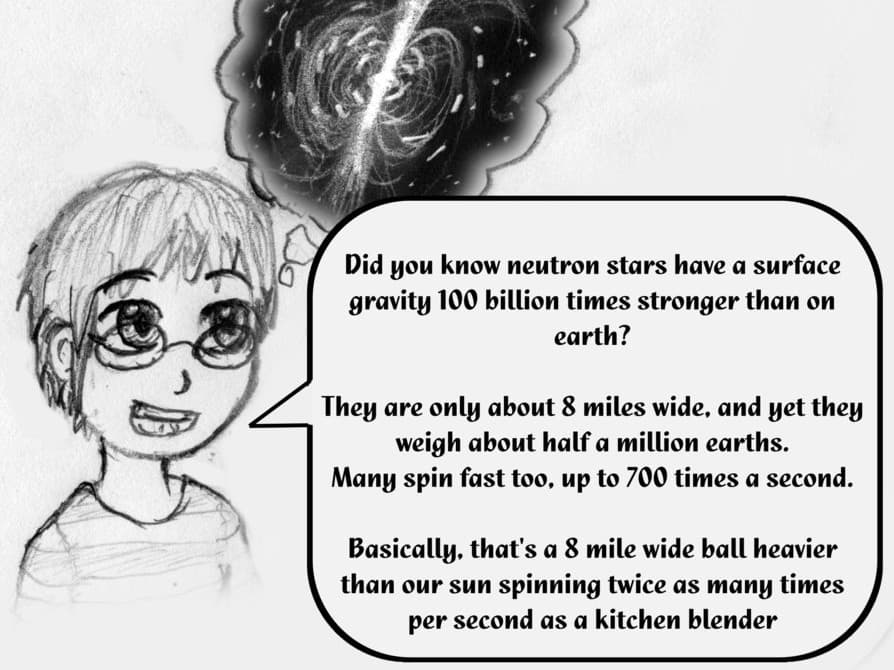 At first glance, it seems that the Earth is a rather large object. Over 7 billion people are able to make their homes on the surface of this rocky planet, and the Earth is also home to more than 8.7 million species (give or take a few million). Given this impressive scale, one could rightly assert that the Earth is large—and it is, but only according to human standards. On the other hand, Jupiter, the largest of the planets in our solar system, is large according to planetary standards. If we are just looking at Earth, it could consume our planet 1,300 times over and still have room to spare. (Ultimately, it could swallow all of the other planets in our solar system!) But Jupiter is nothing when compared with our Sun, which could house over 1 million Earths.

So it seems that there is always something larger than you, something more massive and dense. Today, I'd like to talk about truly massive objects, neutron stars. These stars are actually known for their high density—their extreme weight—rather than their physical volume. These stars are the dense, core remnants of large stars that can no longer support nuclear fusion. You see, stars can take on numerous forms when they exhaust their fuel and explode, and what they become is all based on their mass. Smaller stars, stars that are below the Chandrasekhar limit of 1.4 solar masses, form into white dwarfs. Conversely, when stars reaching megalithic proportions (approximately 4 to 8 solar masses) can no longer support nuclear fusion, they explode violently, leaving behind super dense neutron stars. So just how dense are they?

To understand the extreme density (that's the important thing—understanding—not just memorizing interesting facts), you have to understand exactly how a neutron star is formed. As the core of a massive star is compressed during a supernova and collapses into a neutron star, it retains most of its angular momentum. The smallest a neutron star can possibly be is about 20 km (12.5 miles) in diameter, but it boasts a mass of almost 1.5 times the mass of our sun, possibly up to 3.5 solar masses! Since it has retained only a tiny fraction of its original radius (and therefore its moment of inertia is sharply reduced), a neutron star is formed with very high rotation speed, which then gradually slows down. This situation is analogous to a figure skater pulling in his or her arms to spin faster.

Due to extreme pressures, the star combines protons and electron into neutrons, collapsing down to the smallest possible size allowed by the Pauli-exclusion principle and held up by a process of neutron degeneracy pressure. If matter is accreted onto the neutron star, its high rotational speeds form pulsars. The "atmosphere" of the star is hypothesized to be at most several micrometers thick, and it's dynamic is fully controlled by the star's magnetic field. Below the atmosphere, one encounters a solid "crust". This crust is extremely hard and very smooth due to immense gravity. The outer core consists of matter composed of ordinary atomic nuclei crushed into a solid lattice, with a sea of electrons flowing through the gaps between them.

Proceeding inward, one encounters nuclei with ever increasing numbers of neutrons; such nuclei would decay quickly on Earth, but here they are kept stable by tremendous pressures here. As this process continues at increasing depths, neutrondrip becomes overwhelming, and the concentration of free neutrons increases rapidly. In this region, there are nuclei, free electrons, and free neutrons. The nuclei become increasingly small (gravity and pressure overwhelming the strong force) until the core is reached, by definition the point where they disappear altogether. The core is not well understood. Quark-gluon plasma, Strange matter (containing strange quarks in addition to up and down quarks) and several other ideas are all postulated to exist here but we truly don't quite know yet what resides in the centers of these amazing stars.

Think you're overweight? Before you jump to your nearest treadmill, ponder some of these neutron star facts. 5 milliliters, or one teaspoon of neutron star material, equals the weight of about 900 Great Pyramids of Giza. One sugar cube equates to 100 billion tons. A cubic meter? The entire weight of the Atlantic Ocean. With an escape velocity of 100,000 km/s (Earth's is a puny 11.3 km/s), a fall from 1 meter above a neutron star would only take one microsecond, and you would impact at around 2000 km/s, or 7.2 million kilometers per hour. This force would destroy all your component atoms, rendering all your matter identical. Fortunately, the closest neutron star is rather far away (about 400 light-years), so I wouldn't be too concerned about the aforementioned event.