The Sun's Magnetic Field is Expected to Flip Soon. The End of Earth? 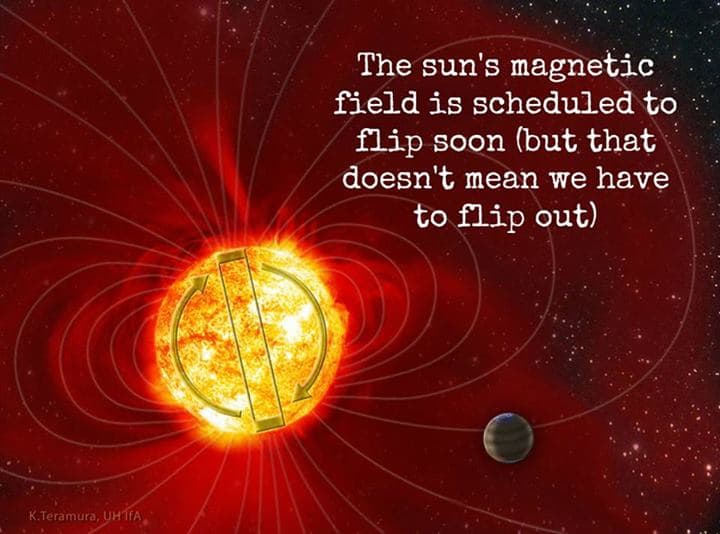 To start, our sun is constantly going through a solar cycle, generally lasting about 11 years before starting anew. During this time, the sun goes through bouts of intense activity (including an increase in coronal mass ejections, solar flares and sunspots) before regressing back to a relative period of solar rest. At the worst point (known as solar maximum), we experience some disruptions in our satellites and other "space-based" technologies, but nothing too destructive. (We can thank Earth's atmosphere and magnetic field for shielding us from the bulk of harmful radiation)

During each solar cycle (this is cycle 24), activity on the sun will peak, which results in the changing of the sun's polarity (bringing us to the midpoint of this cycle). First, the sun's polar magnetic fields will weaken, before going to zero and then reemerging with opposite polarity.

When this does occur (due to the sun's inner magnetic dynamo reorganizing itself), we might experience heightened auroras, as a sheet comprised of weak electrical currents (they only have the strength of about one ten-billionth of an amp per square meter [0.0000000001 amps/m^2]) generated by the sun's slowly rotating magnetic field become wavy.

Our planet, and the rest alike (extending from Mercury to billions of kilometers beyond Pluto, to the heliosphere), become entangled in this invisible sheet (traveling through and out of the densest parts), acting as a strong barrier to protect us from harmful cosmic rays (they zip through the universe at close to light-speed, as they are ejected into space by supernovae) that are trying to break through our outer walls.

According to Todd Hoeksema, a solar physicist from Stanford University, "The sun's north pole has already changed sign, while the south pole is racing to catch up. Soon, however, both poles will be reversed, and the second half of Solar Max will be underway."

You can see a simulation of the flip here.