In our everyday lives, we see many fantastical examples of physics all around us. Many of these things make our day-to-day existence possible. Namely, we have gravity: the pervasive force that fashioned the giant structures of our universe. Next (and much less noticeably,), we have quantum physics; the science behind the millions of transistors that help power the technology allowing this article to be viewed. Yet there is a neglected force more powerful and awe inspiring than gravity, or most others for that matter. Without it, every atom in the universe would spontaneously explode outward, leaving a chaotic mess of nucleons with no structure or composition. This is known as the strong nuclear force, and it is indisputably one of the most incredible forces in nature.

After the famous work of Ernest Rutherford (1871 – 1937) – the fellow that revolutionized our understanding of the atomic nucleus – the scene was well and truly set for another big question: What stops the positive charges within atoms from forcing each other apart? The laws of electrostatic attraction and repulsion had been developed by Coulomb over a century ago, and thus Rutherford’s discovery only heightened the mystery of the nucleus. Especially, considering the fact that when using Rutherford’s value for the size of the nucleus, the repulsive force of protons on a nuclear level is of the order of around 200N (to put it in perspective, that is the equivalent weight of around 20,000 ml of water, or a solid block of iron measuring 14cm in length, height and width). You can try proving this to yourself using Coulomb’s law, using a typical nucleus size as the distance term ‘r’ and the charge on a proton as the two charge terms ‘Q1 and Q2’

Considering that this is a force overcome by the strong interaction between every atomic proton within every atom that makes up the entirety of our physical reality, the magnitude of the strong force (despite its indicative name) really is astonishingly large, around 10^37 times greater than that of the corresponding gravitational force between two protons. That’s not all, for the quarks within the nucleons of the atom experience this interaction also; the strong force binding them together, forming the protons and neutrons we are so familiar with.

So what is it that causes this mysterious, yet essential force? The answer is to be found in quantum chromodynamics, (chromo being the Greek word for colour), a school of physics exploring the quantum quantity known as ‘colour charge’  and its effect on the strong force (also known as the colour force). To clarify, colour in this sense has nothing to do with the visual perception of colour –– like ‘strangeness’ and ‘charm’ are quantum mechanical concepts that are difficult to find useful analogies for. The best way to consider it is to view it as a different form of charge, as the basic concept of charge and colour are very similar. Quantum chromodynamics (QCD) postulates that in the same way electromagnetic interaction is mediated by the exchange of virtual photons, so too is there an elementary particle controlling the strong interaction; known as the gluon.

So, if we consider Quantum electrodynamics, where the exchange of photons can result in an attractive force between opposite charges, we can similarly say that for quarks within a neutron or proton, their difference in colour charge leads to a gluon exchange that binds the quarks together and the attraction to opposite ‘colour’ quarks in other nucleons holds the protons and neutrons together. Interestingly, unlike the photon, which does not interact via the electromagnetic interaction (because of its lack of charge) which it propagates, the gluon is actually affected by the force that it propagates (due to the fact it has a colour charge), which complicates matters when trying to examine its effects. 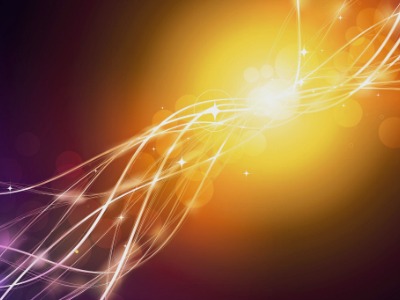 As well as its huge influence in keeping the nucleus together, the strong nuclear force also has an interesting effect on the mass of atoms. The nucleons that make up the atom decrease in energy because of work being done in bringing protons so close together; to such an extent that the result is a tangible effect in the mass of the atomic nucleus that is created. This is easily calculable using the expression E=mc^2: If the energy released in bringing nucleons together to make a nucleus (known as the binding energy) is ‘E’ then the difference in mass between the final nucleus and the component neutrons and protons will be equal to the binding energy divided by ‘c^2’ (where ‘c’ represents the speed of light in a vacuum).

This binding energy (usually of the order of MeV) also explains why quarks are never observed singularly: If two quarks are bound together in a quark-antiquark pair (a meson) then the energy required to separate them is great enough to spontaneously produce more quark-antiquark pairs, which will bond with the lone quarks — resulting in the formation of a pair of new mesons.

So here’s to arguably one of the most important forces in nature, the superglue of the atomic level, which really is holding things together quite nicely.