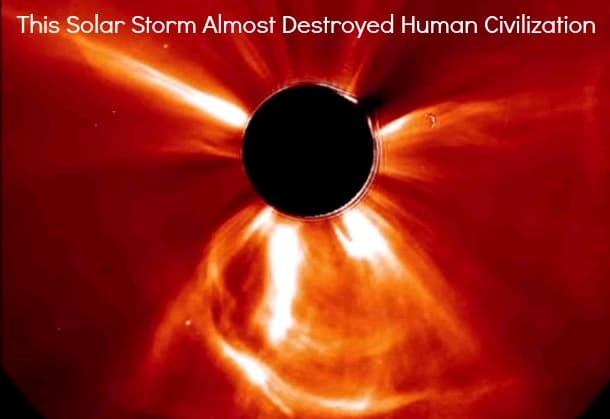 Solar storms are one of the most frightening doomsday scenarios that endanger us today, in the modern era of electricity. They are caused when twisted magnetic fieldlines on the solar surface snap and send a cloud of plasma hurling into space (called Coronal Mass Ejections or CMEs).

These charged particles offer a different kind of doomsday. Instead of mutating life on Earth, or sterilizing the planet, the most likely scenario is a strong cloud of plasma destroys any electronic devise that is on at the time of the strike. Yes, it will cause thousands of casualties instantly as planes fall from the sky, cars suddenly stop working, and various other types of equipment ceases to function, but overall, most people will be unharmed.

The disaster comes through out dependence on technology. Most commerce would be erased, most forms of communication would be obliterated, the internet would be destroyed, many people in hospitals would surely died, world trade would come to a stand still, agriculture would be stopped in its tracks; generally the entire modern way of life would cease. We would instantly be transported to a time in history before we mastered electricity. In 2012, this almost happened.

On July 23rd of that year (before the Mayan doomsday date) the Sun unleashed the fastest and most powerful solar flare we've ever seen, and thought to be the most powerful in the last 150 years. A week before this CME erupted, the sunspot responsible for it had Earth in its crosshairs. Fortunately, the sunspot was kind and didn't explode until later after Earth was safe.

This is probably one of the strongest solar flares human civilization has ever seen, and is estimated to be in equal strength to the Carrington event. That solar flare was strong enough to shock telegraph operators and cause some fires in telegraph offices.

The only real way to protect ourselves from a solar event like this is to put all of our electronics in some type of "safe mode." NASA has stated that the chance of a Carrington-like event hitting Earth within the next 10 years is about 12%. For space-based disasters, that is surprisingly and disturbingly high. The news doesn't get any better according to Steve Traction, when he answered the question: "Are we ready for potentially disastrous impacts of space weather?" What was the answer you ask? "An unequivocal, if not surprising, no!"

Maybe we should do something about that.