What's the Smallest Possible Size of a Star (and why isn't Jupiter one)? 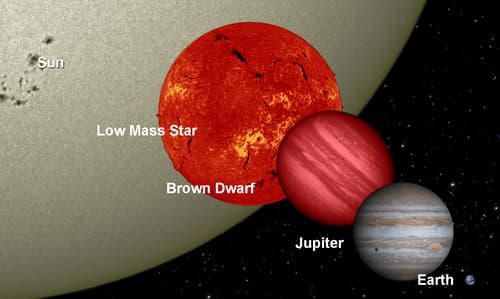 Stars come in a diverse range of sizes and characteristics, but what is the smallest possible size for a star? For a long time, we didn't know, but in 2014, astronomers finally received an answer to the nagging question that asks, "where is the line that separates a full-blown, life-giving nuclear furnace from a much less significant 'failed star?'"

While speaking at the American Astronomical Society’s 222nd conference, Todd Henry - the Professor of Astronomy at Georgia State University - revealed that a star can be no smaller than 8.7 percent the diameter of our Sun to sustain nuclear fusion. It must also have an average brightness no less than 0.00125 percent that of the Sun. In addition, the surface brightness of this slim star should be at least 1,727 degrees Celsius (3,140 Fahrenheit).

To put those numbers in perspective:

The Sun has a diameter of about 1,391,000 kilometers – 8.7% of that comes out to be 121,017 kilometers. For those of you who know your planets, you’ll realize that diameter is actually smaller (about 13%) than the diameter of Jupiter. Yes, there are stars out there almost the same size as Jupiter. In the same way that Pluto was demoted to a dwarf planet, does that mean Jupiter has now been promoted to a star?

As cool as that would be, sadly the answer is no.

In order for a star to be a star, it needs to be massive enough to ignite nuclear fusion at its core. That is a property of density, not so much of diameter. Case in point, there are ‘hot Jupiters’ orbiting very close to their parent stars. Some of these planets are half as massive as Jupiter and yet have ten times its diameter – naturally, the planet is far less dense than Jupiter precisely because (despite their large size) they are lacking in mass and, well, really they are just super spread out.

It’s no different than our star conundrum, Jupiter simply isn’t massive or dense enough to be a star – sad but true.

OK, back to these uber small red dwarfs. A red dwarf, which is the smallest classification star we have, is the most abundant type of star in the Milky Way. It’s estimated that about 75% of our galaxy’s stars are red dwarfs. That makes studying them very important, as well as one of the greatest candidates for hosting life-sustaining planets.

In a study conducted early in 2014, using data from the Kepler Space Telescope, astronomers have estimated about 4.5 billion of the Milky Way’s 75 billion red dwarfs host Earthlike planets.

Who knows, the first alien species we discover might be the Kryptonians.