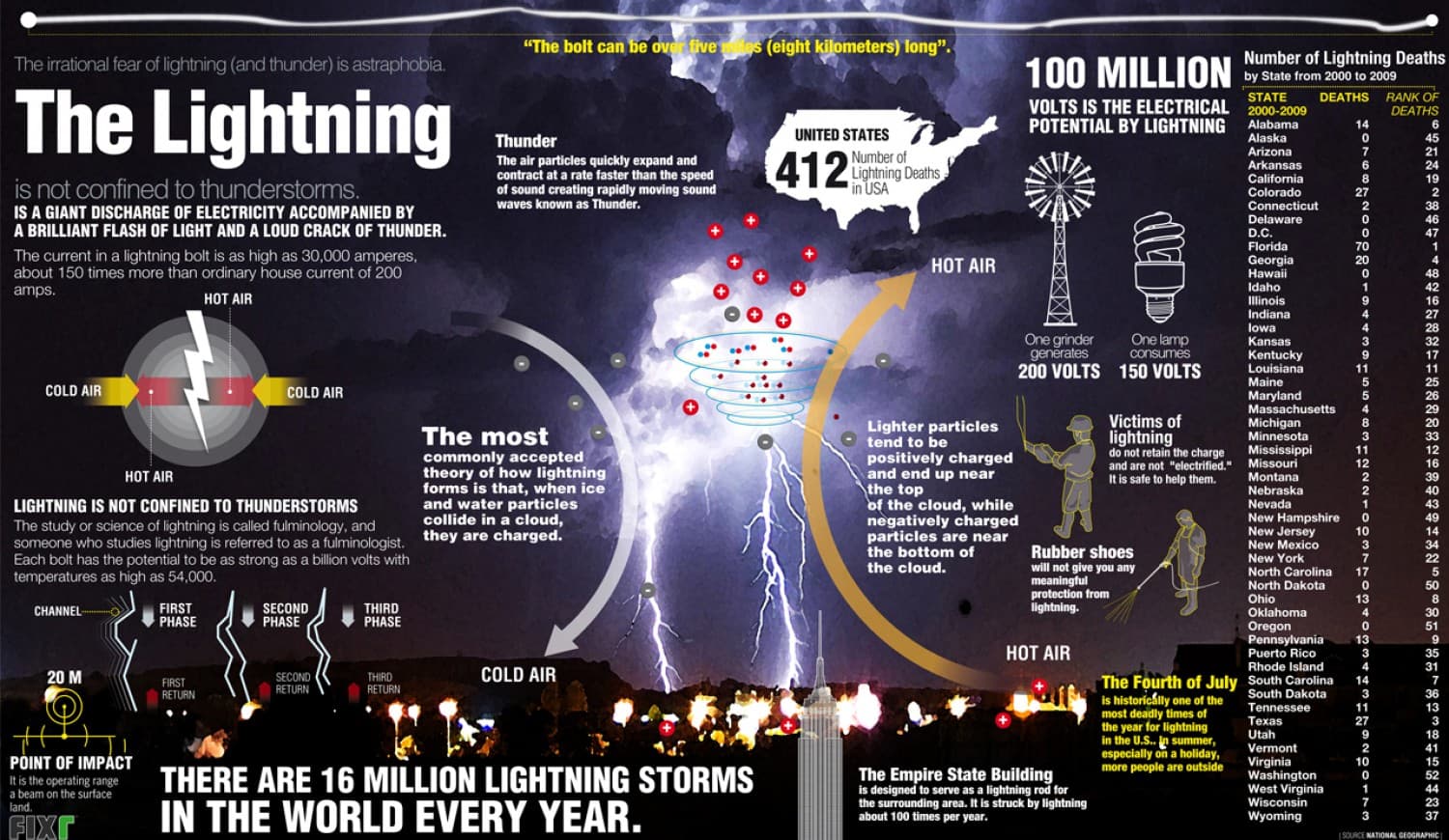 We have known that lightning is made from electricity for quite some time; however, the process that forms lightning is still not completely verified, ultimately leaving a bit of room for debate. Leading theories focus around separation of electric charge and generation of an electric field within a thunderstorm. Recent studies also indicate that ice, hail, and semi-frozen water drops (known as graupel) are absolutely required for lightning development. Even though there are several theories on lightning development, I will just be focusing on one.

To have lightning, we must first have a thunderstorm, and that means we have several things going on. We have updrafts on the leading edge of the storm of warm air rising up into the cloud, fueling the storm and providing precipitation, and down drafts of cold air, bringing rainfall to the ground. That's how a storm works in a nutshell.

Despite having a very cute and fluffy outward appearance, thunderstorms are very active. The strong updrafts on the leading edge of the storm pull small liquid water droplets from the bottom of the storm to the top, 6 to 9 miles above the ground. At this height, the air temperature is well below freezing. At the same time, down drafts are pulling the frozen ice particles and hail already frozen in the upper layers of the thundercloud down. When these two collide, the water droplets freeze and release heat, which in turn keeps the surface of the ice and hail just ever so slightly warmer than its surroundings, creating a "soft hail" or graupel.

When the graupel collides with additional water droplets being fed into the storm, the most important phenomenon occurs to create lightning: Electrons are sheared off the rising particles from the collision and collect on the falling particles. You know how you can rub a balloon on your head, and it becomes static-y? Same principle with the storm - electrons are transferred from one object to another. Since electrons are negatively charged, this produces a storm cloud with a positively charged top and a negatively charged bottom. We are now ready for lightning.

As I'm sure you've been told, with electricity, opposites attract. The positive and negative charges separate as the particles rise and fall, and an electric field is created between the cloud's top and base; basically becoming a giant, floating, fluffy magnet.

Since this floating, fluffy magnet has an electric charge, it should be able to discharge that charge pretty easily. Unfortunately, the atmosphere is a fairly good insulator, preventing electricity from traveling through it. So, for lightning to strike, TREMENDOUS amounts of charge have to build up, somewhere in the neighborhood of 100 million volts. Shocking.

Once you reach that threshold, you get a lightning strike. Congratulations!

When you are dealing with lightning, an electric field in the cloud isn't the only thing that develops. As the electric field grows in strength, a pool of positively charged particles forms below the storm, moving with it as it's blown by the wind. As it moves, the positive charges travel up higher objects like trees, buildings and telephone poles.

I'm sure you've probably heard that lightning doesn't come from the cloud, it comes from the ground. That's not entirely true. A typical CG strike actually starts within the cloud itself. From the cloud (once the volt threshold is crossed) a very faint negatively charged channel called a "stepped leader" emerges from the bottom of the cloud and travels to the ground in a series of steps that are 160 feet (50 meters) in length and last for one microsecond (0.000001 seconds).

Once the leader reaches the end of the step it pauses for about 50 microseconds, seeming to "look" around for something to strike. If it doesn't see one, it splits apart to branch into two or more different directions to take another step. This process repeats until the lightning finds something to strike. This is also what gives lightning its characteristic jagged "back and forth" look it is iconic for. It typically takes the stepped leader about 50 milliseconds (0.05 seconds) to travel from the cloud to the ground, but time can vary depending on the length of the path it took. Some strikes have been studied and found to take more than 10,000 steps!

An electric wave or return stroke shoots up the channel in a brilliant pulse, creating a ground current. The current takes about 1 microsecond to reach its peak of about 30,000 amps. The return stroke creates 99% of the lightning's brightness and actually travels from the ground to the cloud; it travels so fast, we actually see the opposite. As big and as powerful as lightning seems, the largest part of the actual bolt is no larger than one centimeter.

LIGHTNING FROM AROUND THE WORLD: