The Oldest Water in the Known Universe: 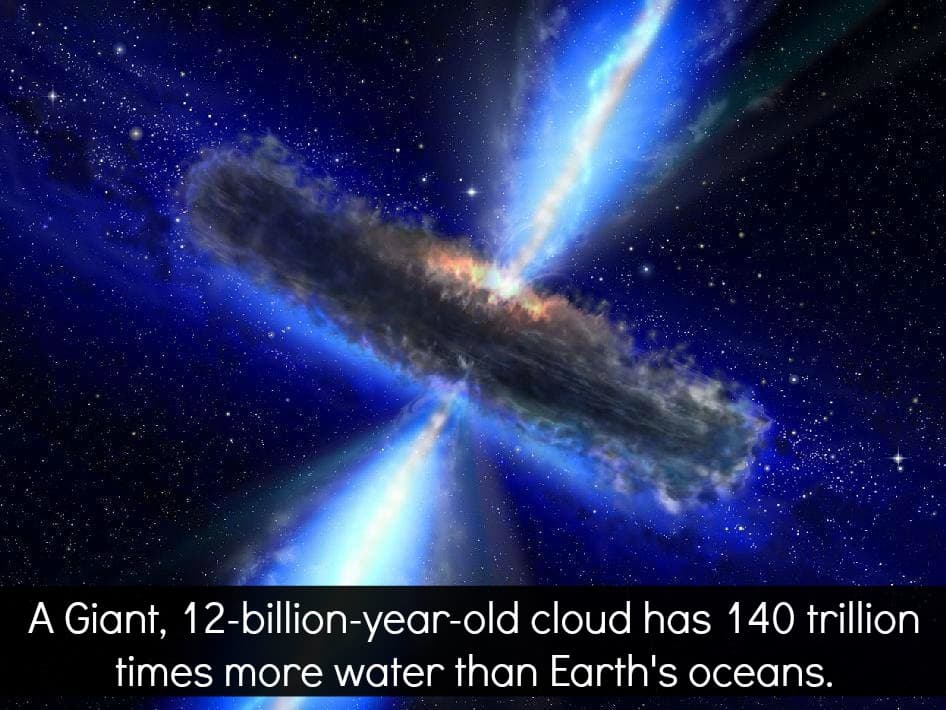 Have you ever left a glass of water sitting out over night? If you have, then you know how this generally works out -- The next day, you get home after taking the dog for a brisk jog; you grab the glass of water sitting on the coffee table, and…bleh. Old water does not taste very good (okay, so it's a rather specific scenario, but you get the point). And ultimately, this water has only been sitting around your house for a few hours. Imagine drinking water that has been floating about the cosmos for billions of years (not terribly yummy, I'm guessing).

In 2011, astronomers discovered the largest and oldest mass of water ever detected in the universe -- a cloud of dust and debris orbiting a supermassive black hole 12 billion light-years from Earth. Unfortunately for us, 12 billion light-years is rather far away. In fact, it is amazingly far away. So we can't really travel there to replenish Earth's continually depleting supply of fresh water. Plus, it is orbiting a black hole, and given the amount of debris that is generally found next to black holes, this is one place that we really don't want to venture.

The black hole in question is approximately 20 billion times more massive than the Sun and it produces as much energy as 1 quadrillion suns. The cloud that orbits this beast was found to be harboring 140 trillion times more water than all of Earth's oceans combined. That’s enough water to give each person alive today an entire planet’s worth of water 20,000 times over (that’s a lot of water). Not impressive enough, the cloud alone contains 4,000 times more water vapor than what it estimated to exist in the Milky Way galaxy. Of course, the key here is water *vapor* as much of the Milky Way's water is locked up in ice (see: Europa).
The amount of H2O detected is impressive, but this is more than just a fun factoid. Since the water is 12 billion light-years away, we are seeing this cloud as it existed more than 12 billion years ago. Ultimately, this time frame means that we are seeing water that was present only 1.6 billion years after the beginning of the universe. Researchers note that "This discovery pushes the detection of water one billion years closer to the Big Bang than any previous find."