The Myths of the Supermoon 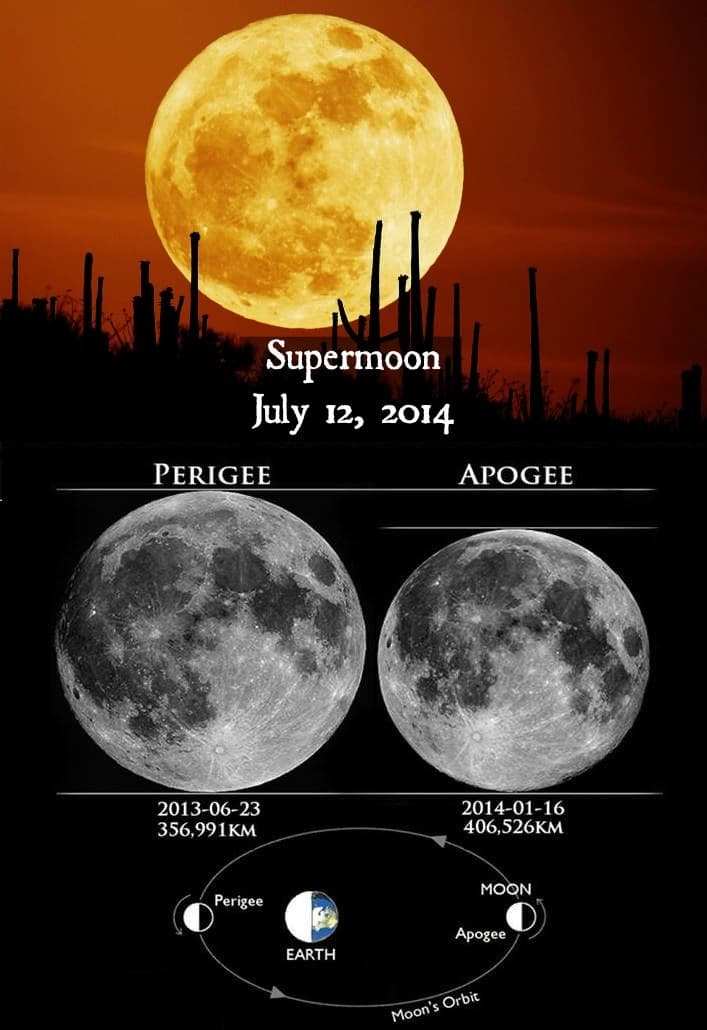 As many of you already undoubtedly know, the supermoon occurs this weekend. We've seen a bit of misinformation about the event itself posted on social media pages and websites alike (including several news agencies), so we want to dispel some of the myths.

First, let's begin by stating what the supermoon is and why it occurs. The moon is in orbit around the Earth, but its path is not static. In fact, its elliptical orbit sees its distance vary from 225,623 miles [363,104 kilometers], at perigee to 252,088 miles [405,696 kilometers], what we call "apogee." The supermoon is what we get when the moon makes its closest approach to us whilst it is also full.

Now, as you will note in pictures, the moon appears a bit brighter and larger in the horizon of our night sky, but you may be surprised to learn that this is (by and large) just a pesky illusion. In fact, it's an optical illusion we don't have a solid explanation for; however, the consensus seems to be that the moon appears much bigger on the horizon because we have trees and buildings to compare it to. When it's located much higher in the sky, we have nothing to compare it to but the sky itself and some very, very distant stars. As such, it seems a bit smaller.

So some of you may ask "well, why does the moon look so much larger than it usually does during perigee in some of the images [like the one at the top of this infographic] posted online?" Unfortunately, most photographers employ photographic techniques that exaggerate the size of the moon, meaning these images are usually very misleading. Ultimately, I find this to be one of the more frustrating aspects of the supermoon, but I digress.

Some other common misconceptions about perigee say that the supermoon can trigger Earthquakes, because the moon's gravitational pull is the most strong. This is in fact a misconception. A poor one at that. While the moons gravitational pull is slightly greater than average (by a small, small amount), not a single bit of evidence has been discovered to link the supermoon with heightened seismic activity. So I would discourage anyone from taking out an insurance policy for earthquake damage prior to this evening. The same can be said for flooding. Again, the pull on the oceans is increased slightly, but its still inconsequential. Perhaps a few centimeters at the most.

Here are some basic facts about the supermoon:

We encourage everyone to get out of the house for a few moments and gaze up into the sky at Luna, as she will be especially beautiful tonight (illusion or not) The best time to do this will be around sunset (because of its position in the horizon).

And when you are lying on your back gazing up at this wondrous object (or using your telescope), remember that another life-time ago, men walked there, leaving footprints that still remain there to this very day.