The Mysteries of Saturn 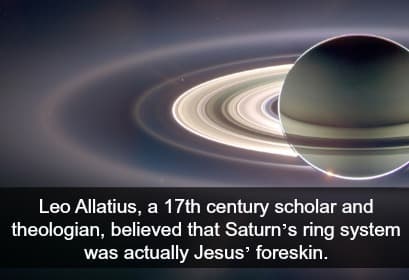 The quest for knowledge is just that: a quest. Sometimes this quest will take us to amazing and fantastical places—to the mountains of Mars, the insides of an atom, or a massive planet orbiting a distant star. Other times, this pursuit takes us to places that are strange and confusing, like a bit of foreskin surrounding Saturn.

If developing theories can take an individual down bizarre paths (indeed, it can), then few have traveled stranger paths than Leo Allatius, a late 17th century Catholic scholar and theologian. In an attempt to understand Saturn’s ring system, Allatius developed some pretty weird ideas. However, before we get to Allatius, let’s have a basic overview of Saturn’s history.

The Greeks looked at the night sky and saw six “wandering stars” traveling about the relatively stationary heavens. Over the course of a year, these objects journeyed forwards and backwards and, of course, there was much debate regarding their exact nature. Two thousand years later, scientists had a pretty good understanding of these strange wandering stars. Until Galileo went and mucked everything up. In 1610, Galileo pointed his 20-power “optical tube” (his telescope) at Saturn and discovered “ears.” These odd appendages intermittently disappeared and reappeared over the course of a year. Galileo ultimately theorized that Saturn was a three-bodied system.

Allatius rejected this idea. Allatius was the keeper of the Vatican library, and in De Praeputio Domini Nostri Jesu Christi Diatriba (Discussion Concerning the Prepuce [Foreskin] of our Lord Jesus Christ) he proposed that, as Jesus ascended, he left a bit of himself in the heavens: “the holy foreskin may have ascended into heaven at the same time as Jesus himself, and might have become the rings of Saturn.”

You read that correctly, Allatius believed that Galileo had discovered Jesus’ foreskin.

Luckily, the story doesn’t end there. Forty-five years after Galileo’s famous observation, Dutch astronomer Christiaan Huygens came up with another theory. Using a more powerful telescope than Galileo's (a 50-power refactor), Huygens looked at Saturn and correctly theorized that astronomers were seeing a thin, flat ring. Shortly after, in 1675, Italian-born astronomer Jean-Dominique Cassini discovered a division between what are now called the A and B rings. Finally, in 1979, history was made when Pioneer 11 reached Saturn, flying within 22,000 km (13,700 miles) of the cloud tops.

We now know that Saturn’s rings are comprised of billions of particles, some of which are larger than mountains, and some of which are as small as dust. With today’s knowledge, it’s easy to mock Allatius. Admittedly, his ideas seem completely absurd. However, some of our own ideas are just as wild and fantastical—parallel universes, tiny strings that make up all of existence, dark matter and energy, the list goes on and on. I’m not saying that you can’t laugh at silly theories, or that our more creative theorists shouldn’t be mocked. But just remember, if everyone was afraid to state their crazy ideas, we’d probably never get to the truth.