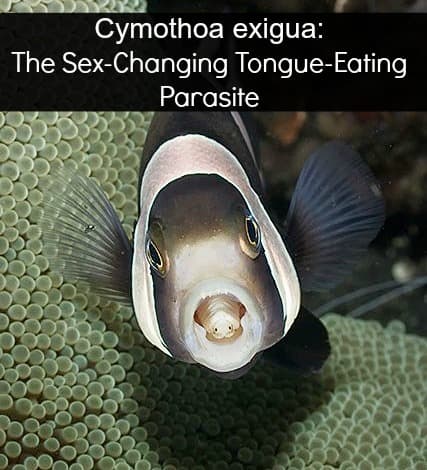 We have covered parasites several times in past, but this may possibly be the most horrifying yet. This little critter is the stuff of which nightmares are truly formed.  I would like to introduce you all to Cymothoa exigua, or the tongue eating louse.

Cymothoa exigua is an isopod (like crabs or lobster) and is a fish parasite. This crustacean is a marine-louse, if you will.  The females can grow to about an inch in length and males about half that. It is the only known organism to replace an entire organ of its host species, in this case, the poor fish's tongue.  It primarily targets the snapper, but has be seen in 7 other other fish species. These organisms are known as a protandric hermaphrodites, which means they start their lives as males and actually switch sexes later on in their life cycle.

The parasites start their quest by swimming inside of a fish's gills. Once there, they will secure themselves to the gills until their maturation process is complete.  Eventually, once the young tongue lice have developed, one changes its sex from male to female. After this process is complete, the louse will detach itself from the gills and slowly climb to the base of the tongue, which she (apparently) thinks is a  fantastic place to call home.

Using her incredibly strong hind legs, the louse then secures herself to the fish's mouth--settling there permanently.  In order to establish a permanent residency, the louse pierces the fish's tongue with her powerful bite. After she makes an incision, she starts to suck her fill of blood.  This insatiable appetite eventually leads to the depletion of all the blood in the fish's tongue. As a result, the fish's tongue  atrophies, withers away, and falls off.

What is left after this process is compete is a rather large crustacean, securely held to the fish's (now destroyed) organ.  As unpleasant as this must be, the process does not kill the fish; on the contrary, the fish actually starts to use the parasite as a pseudo-tongue--think of it as a kind of an organic prosthetic.  With such a large organism living in its mouth and taking up so much space, it's hard to believe that the fish can actually eat at all.  Nonetheless, the fish can survive and even thrive (though maybe not as well as if the parasite were not there).

And this is where the isopod remains, feeding off fish mucus or bits of blood that are left in the mouth area. If you think this is bad, hold on, because the parasite still needs to reproduce.

If any males are still hanging out in the gill chamber, they will crawl up and mate with the female while she is still playing the role of the fish's tongue.  That's right, first the parasite eats the fish's tongue until it is destroyed, then steals food that the fish is trying to eat, then has sex in the fish's mouth, and the female crustacean gives birth to a brood of male lice.

Which will disperse and continue this whole nightmarish cycle. It may sound rather horrible (it does, even to me); however, we all are hosts to a number of different organisms. Indeed, 90% of the cells in the human body are not human cells. Yes, that means that 10% of the cells in the human body are, in fact, human. Quite literally, we are all walking, talking ecosystems. However, most of the bacteria and other organisms that make homes inside of us are too small to notice on a day to day basis.

Fortunately, in humans, parasites the size of the tongue louse are rather rare.

Not much else is known about these little critters, but they do have an influence on the lives of humans.  Since Cymothoa exigua are fairly widespread thorough the oceans, ranging from depths of 2 meters (6 ft 7 inches) to 60 meters (200 ft), they have been commonly found in the mouths of fish we are looking to purchase.  Lawsuits have been filed against supermarket chains for customers buying fish with isopods in their mouths and cooking them without knowing.  Despite this rather nasty surprise, the charges were dropped because their effects are not harmful for human consumption.  In fact, besides them potentially biting you while they are still alive, they pose no threat to humans.