The Moon's Role in Evolution 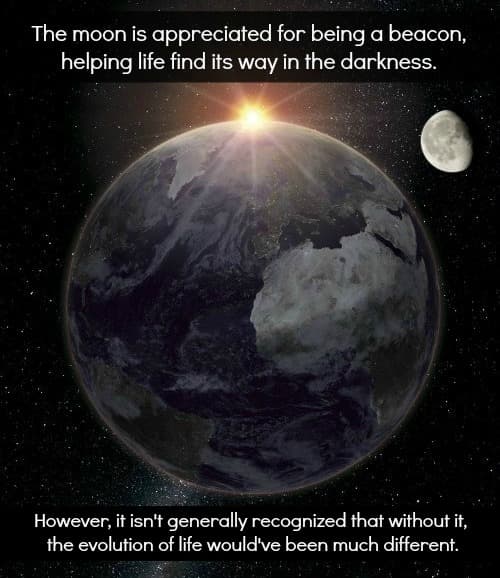 Even though the Apollo moon mission ended half a century ago, I, along with many others, firmly believe that it was the greatest technological feat in history for us to have walked across the Moon's barren surface -- with the vision of Earth in our rear-view mirror, with seemingly endless space before us. I have no doubt that, in the future, we will fully realize the Moon holds many-a-key uses in the near-future; both for our planet and our species. Therefore, it is logical to conclude that the moon is much more than simply Earth's orbital buddy. This may even be more true than most realize.

There are many theories in existence about how the Moon came to be in orbit around Earth – ranging from the downright sci-fi theory that the Moon is a hollowed out alien spacecraft, right down to a cataclysmic planetary collision – called the Giant Impact Hypothesis (this posits that after another planetary body struck Earth, it ejecting a massive portion of Earth’s volcanic mass into orbit, which solidified to form the Moon). If you were from the first theory - Alien creator race, then without the Moon, you could argue that we simply wouldn't be here, as our Alien buddies wouldn't have arrived. But, I know we are all far more sensible and questioning than that...

Needless to say, regardless of the Moon’s creation, we can be certain that without it, our little blue speck of the cosmos would be a very different place.

The Moon, as it is currently, balances the Earth’s wobble. This is manifests in the seasons and can be seen as a season progresses from winter into spring, displacing glacial regions in the North Hemisphere. Basically, it is top heavy during winter, yet in Summer, the ice melts and relocates to the expanse of water encompassing the planet.

Due to residual effects from glaciation, our planet still moves on its vertical axis slightly-off center (to envision this, you can imagine impaling the planet with a perpendicular line from North Pole to South Pole).  The angle of this natural axial tilt is 23°. This combination of several minor deviations forms relatively stable environment, thus allowing seasons to manifest within the off-axis rotation and minor axis wobble.

However, were the Moon to not present, life would need to overcome a large obstacle  in order to thrive – the unstable conditions. Life, as we know it, requires relatively stable conditions. It can adapt with seasonal variations, but ultimately, if it was truly chaotic, life may form, but would not survive or live long enough to mutate and adapt, as future mutations could remove tolerance for the next harsh climate change.

A planet swinging from blistering sunshine to icy tundra every few decades would very quickly find itself devoid of life that could adapt so rapidly, and thus would just be, what I would coin as 'unsuitable'.

The Moon promotes tidal effects on the planet (the sun does as well, but to a much lesser degree), essentially, it is like a huge agitator, stirring up the oceans, and even oxygenating them on a planetary scale. If the Moon had not been present, the oceans and seas would consist of individual groups of totally unique species. Isolated and therefore vulnerable to extinction between the ice ages and scorching sunshine. Lack of tidal effects may have prevented suitable 'beaching zones' for the simple oceanic life-forms to leave the ocean. The population of such a planet would be strictly aquatic.

Additionally, the Moon is also responsible for taking some asteroids and comet impacts for Earth. Whilst an asteroid may unlikely be a 'Doomsday' event in mass and speed (if it was Doomsday for the Moon it could well be Doomsday for Earth), the Moon can intercept these and keep life on Earth that tiniest bit safer. If the Moon doesn't collect the meteor or comet, it can still influence gravitational effects which could work for or against Earth.

Most biological considerations revolve around eyesight. The eyesight of mammalian creatures has been shown to be specifically developed to use moonlight as a starting point. NASA Astrobiologists themselves have commented that humans can see by starlight alone, providing a clear sky and time to adjust. The Moon was an added light in the sky which helped us deal with threats and dangers - from wild animals to perilous falls. Moonlight, it seems, was really was important to our species, prior to artificial lighting. How illuminating?

It is also theorised that the tidal forces exerted upon Earth from the Moon cause drag on the tectonic plates, mantle and core - theoretically it could be possible that the friction creates heat and encourages crust-subduction. Whether the frequency that we have volcanic and seismic activity currently is better, or worse without the Moon, who is to say?

That just about wraps up what our planet would be like without the Moon, if its absence predated the jump-starting of life.