The Moon and the International Space Station 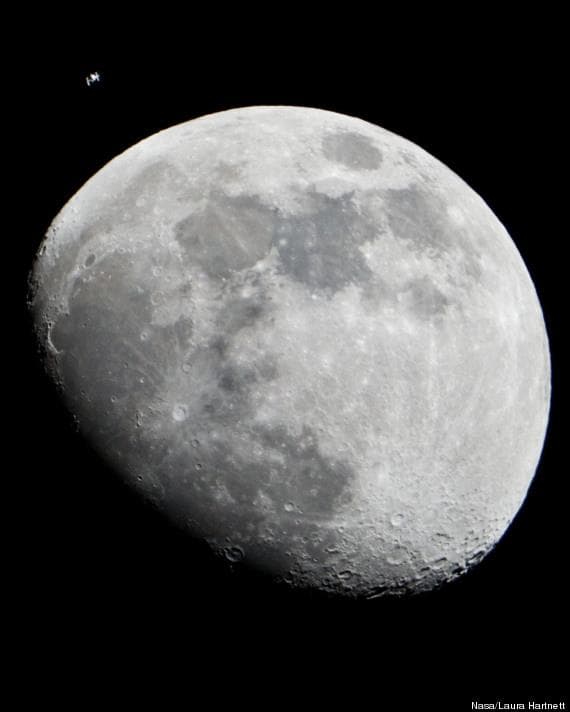 I spy something with my little eye that is...the International Space Station (ISS). One of the most remarkable images I've seen was taken at NASA's Johnson Space Center in 2012. The image, which was taken by photographer Lauren Hartnett, captured the old (Luna) and the new (the ISS) side-by-side in one stunning image.

One of the most fascinating things about this image, is how close the two satellites appear to be, but in fact, the Moon orbits Earth from a distance of roughly 250,000 miles (404,000 km), while the ISS is just 250 (400 km) miles away -- making the distance separating the two quite large despite the illusion.

Generally, the ISS is pretty easy to spot if you know where (and when) to look. On most nights, it can outshine Venus and become the third brightest object in our night sky (after the moon, and sun, of course). The trick about capturing an image like the one Lauren caught, is timing. The ISS is traveling in orbit around Earth at approximately 5 miles per second (or about 7.5k meters) or 17,500 mph (or 28,0000 km/h). Therefore, it only takes about half a second for the ISS to transit the moon, which makes this shot all the more incredible!

Fun Fact! You can subscribe to text messages from NASA, who will send you a text message as a reminder of when to see the ISS as it is passing you overhead. If the conditions are right, that is.

A few months ago, our APOD was of an image of the ISS literally dancing across the face of the moon. You can see it here (it is just as awesome as this one.. maybe even more-so):