The Moon and Regulus Present: Moongus 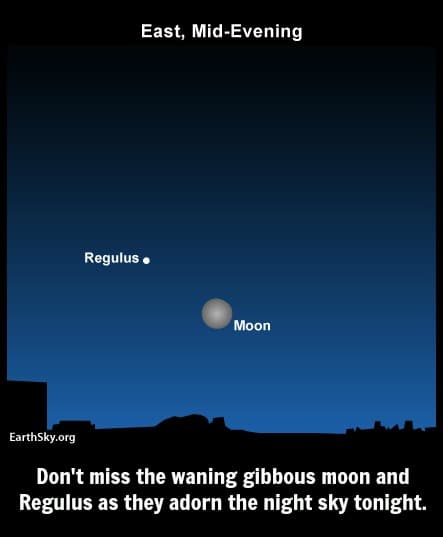 Tonight, look up in the sky. Look east and you will see the moon and Regulus unite, giving all of the residents of Earth (who are keen on stargazing) a unique concert. This concert begins in the evening (about three hours after sunset) and ends around dawn in the mid-northern latitudes. The Southern hemisphere will see it sooner after sunset, but no matter where you live, it should be visible. (As always, binoculars might be helpful. That is, if you haven't missed it already)

As you might already know, Regulus, also commonly called Alpha Leonis, is the brightest star in the Leo (Lion) constellation and the 21st brightest in the night sky (it comes in with an apparent magnitude of 1.35). Regulus itself - a multiple star system containing four stars, which are organized in two pairs - is located about 79 light-years from Earth. One of the stars; Regulus A, is paired with a white-blue main-sequence star that hasn't been directly observed yet, but according to astronomers, it is probably a white dwarf.  Regulus B and C, both dim main-sequence stars, are located a bit farther away.

Regulus is very regularly occulted by the Moon because it is the closest star to the ecliptic (the plane on which the sun, moons and planets travel). Very rarely, Regulus is occulted by Mercury or Venus. How rarely does this occur? Well, Regulus’ last occultation by a planet was on July 7, 1959 (by Venus). The next will won't occur until October 1, 2044 by the same planet.

Tonight, the entire world will witness the same beauty: the Moon and the bright star Regulus, close to one another, lighting up the night sky. Astrophotographers, if you capture a good image, send it our way.