How Big is the Moon? The Moon Compared to the United States 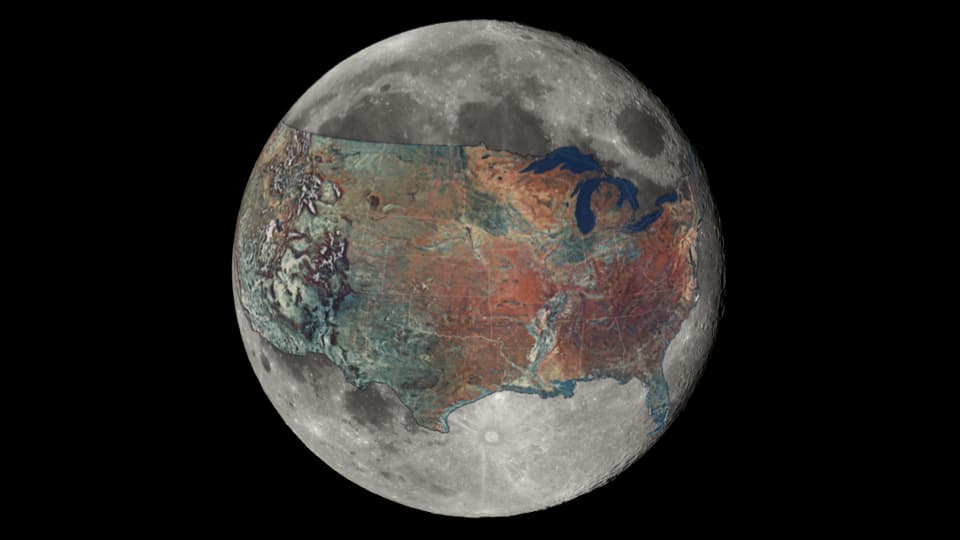 For the most part, our moon is nothing particularly special. It isn't home to a series of active volcanoes, a thick atmosphere chalked full of nitrogen (with oceans of liquid hydrocarbons), or cryovolcano plumes--things which other moons in our solar system are known to contain. But regardless, it is very special to us. Not only is our planet the only one capable of experiencing a total solar eclipse, the moon also helps regulate the tides here on Earth, as well as helps to stabilize our planet's tilt. Both of those are important, but most important is the moon's relative size to Earth, as the moon is just about a quarter of Earth's diameter with about 1/81th of its mass, with most moons being much, much smaller.

(with the exception of the dwarf-planet Pluto, which effectively serves as a dwarf-double planet system since Charon, which is sometimes referred to as a moon, is exceptionally large compared to Pluto. It's diameter is about 750 miles (1,207 kilometers), making it about half the size of Pluto with just about 1/9th of its mass.)

Our moon, which lies at an average distance of about 238,857 miles (384,403 km) from the Earth, appears as nothing more than a brilliant orb in our sky, reflecting starlight from the sun back to our small planet, which makes it difficult to grasp the actual size of our natural satellite, as it takes up a mere half-degree in our night sky, only varying just a tiny bit based on how far the moon is from the Earth at every given moment. The moon is at its closet point from Earth at a distance of about 238,900 miles (384,000 km) during what we call perigee. When it is the farthest from Earth at 252,700 miles (406,700 km), we call it apogee. Despite that, its size never changes, even if it appears larger and smaller at certain points. The moon diameter is always 2,159 miles (3,474 km), which is 27% of Earth's diameter of 7,901 miles (12,715.43 km) at the poles.

In order to truly grasp the size of the moon, a redditor created this incredible image of the Earth-facing side of the moon, with the United States laid on top of it. This is a good comparison since distance across the US is approximately the size of half the circumference of the moon. (Fun fact: If the Earth were hollow, 50 moons could fit inside of it) Now, the greatest distance between any two points throughout the US is 2,892, which is from Point Arena California and West Quoddy Head in Maine.

While this is a great way approximation, is isn't perfect by far. Particularly since the moon isn't 2D, it's 3D. It is also missing both Alaska and Hawaii. Even if the two were added, the distance between New York City and Honolulu in Hawaii is 4968 miles (7996 km), which is about 73% of the moon's circumference, so it still wouldn't wrap around the surface of the moon perfectly. This is still an effective comparison! Thanks BoredBoarder8; we are impressed!

You can see a larger version of this image here.