The Many Strange and Wonderful Smells of Space 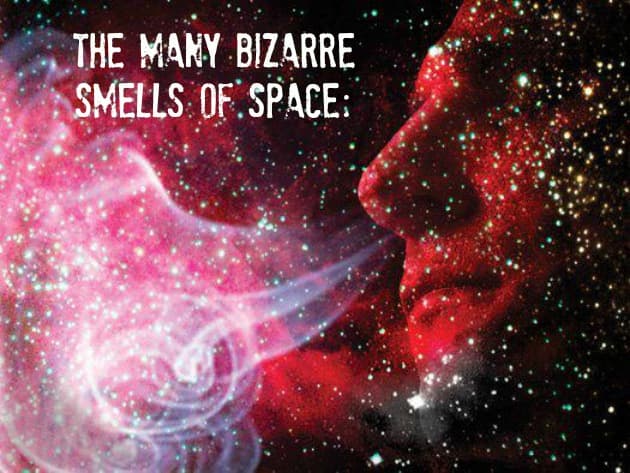 Most people, including myself, have never thought about the smell of space. After all, how can you smell in a vacuum? According to astronauts on the International Space Station (ISS), space does indeed have a smell; and a rather peculiar one at that.

So, what does space smell like? Astronauts have a hard time describing the smell, ISS Science Officer Don Pettit says, “The best description I can come up with is metallic; a rather pleasant sweet metallic sensation” Other descriptions include “hot metal”, and “seared steak”.

PUTTING THE 'SMELL' IN SMELLY:

How are astronauts able to smell the final frontier? Megan Garber from the Atlantic writes,

“It turns out that we, and more specifically our atmosphere, are the ones who give space its special spice. According to one researcher, the aroma astronauts inhale as they move their mass from space to station is the result of ‘high-energy vibrations in particles brought back inside which mix with the air.’”

The smell in our solar system is particularly pungent because it's rich in carbon and low in oxygen.

Now, you are probably wondering to yourself, ‘what does the rest of space smell like?’ Well, the scent of each region would be a representation of the elements found there. For instance, oxygen-rich stars would have aromas reminiscent of a charcoal grill.

In interstellar space, the smells would be rather interesting. In dark pockets of the universe, molecular clouds full of tiny dust particles host a veritable smorgasbord of odors, ranging from the wafts of sweet sugar, all the way to the rotten egg stench of sulfur.

Most notable is the central region of our galaxy. Astronomers believe it smells like raspberries and tastes like rum. They came to this conclusion when they were scouring the sky around Sagittarius B2 (a dust cloud located near our galactic center) in search of amino acids (a precursor to life). Instead of finding them, they discovered the cloud is host to an abundance of ethyl formate - the chemical primarily responsible for giving raspberries their flavor and rum its smell.

This led them to conclude that if you were able to travel to that portion of the galaxy, the area would taste vaguely of raspberries, whilst smelling reminiscent of rum. That is, if you could actually capture some of the chemical in your mouth, or carry the smell of the cloud with you to your spaceship without dying first.

*spoiler alert* you *would* die. not only because space is scary and this cloud is really, really far away (you would be dead long before you even arrived), but also because another lethal chemical, called propyl cyanide, was discovered nearby.

Lastly, astronauts from the Apollo 11 mission reportedly compared the stench of the moon to spent gunpowder. And that is what space smells like.

BRINGING THE MOON TO EARTH:

Disappointed that you won't get to sniff the metaphorical underpants of God? Fear not, my friends,  because science! NASA recently contracted Steve Pearce -- a chemist based in Ipswich, England -- to develop a scent that is similar to the one noted in space. They hope to replicate it for training purposes -- to better equip astronauts to handle the full brunt of life beyond Earth's horizon. The sights, smells and the weightlessness.

Granted, it won't be the same... not by a long shot, but it's something.