The Great Migration: The Journey of 10,000 Stingrays 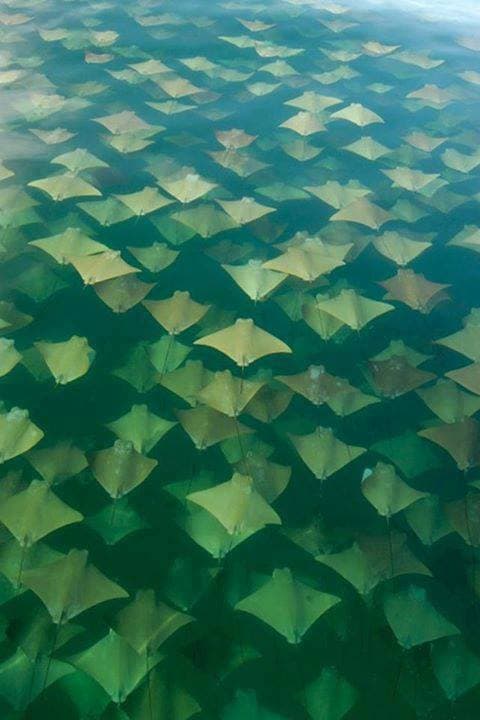 In this image, thousands of stingrays migrate towards their summer feeding grounds. The rays pictured here are venomous golden cow-nose rays. The venom carried by these majestic creatures, which is transferred via the stinger located on the ray's tail,  can be life threatening if it comes into contact with humans. The stinger itself comes in the form of a razor-sharp spine that grows from the creature's tail. This whip-like structure can reach almost 15 inches (38cm).

One such stinger caused the death of famed wildlife expert, Steve Irwin, in 2006. However, such cases are rare. Stingrays are more likely to flee than fight, and generally only attack if they feel that they have no other options. Typically, humans are stung because they accidentally step on the ray (stingrays often conceal themselves on the ocean floor). When a sting occurs, there is usually nothing more than a slight, bee-like sting and possible infection. But ultimately, the amount of trauma depends on where the wound occurred. Irwin's case was particularly unlucky, as the ray's stinger pierced his heart.

Despite the fact that attacks are rare, if you ever happen upon a mass migration (some groups, or "fevers," travel in packs of up to 10,000) you should not launch yourself into their midst. Tempting though it may be, not only could this cause the rays unnecessary stress and duress, it could endanger your life. Such feats should only be attempted by experienced divers and those individuals who know how to swim among the rays without interfering.

This particular image was taken in the Gulf of Mexico by amateur photographer Sandra Critelli. Of the experience, she states:

"We were motoring around Holbox Island in the Gulf of Mexico, trying to find whale sharks so we could snorkel with them and photograph them. It was June. I was searching the horizon when I spotted this astonishing "wave" of cownose rays. We turned the boat towards the school, turned off the engine, and watched them move past us. There were thousands! They were swimming on the surface, and deep down, and all going in the same direction. They looked like beautiful leaves moving softly and gently by the wind. Later I learned that they migrate 10,000 at a time and are found in the warm currents from Brazil all the way to southern New England. Passive creatures, they can live until about 13 years of age and can be abundant in the Chesapeake in the summer.  As quickly as they appeared that magic day, the migrating rays disappeared. I felt very fortunate to experience something so beautiful."

The cow-nose rays are so named because of the dome-like structure on the top of their head. Measuring up to six and a half feet across (1.9 meters) this particular species does not rest on the ocean floor like most other rays. Instead, the prefer to stay on the move in open waters (probably a good choice, as it is a sure way to avoid getting stepped on by unwary humans). Although the cow-nose is larger than most humans, it is by no means the largest ray. The manta ray, a sub order of the group, can reach a staggering 23 feet (7 meters).