The Future of Flight: Watch Two Men Fly Over Dubai in Jetpacks (video) 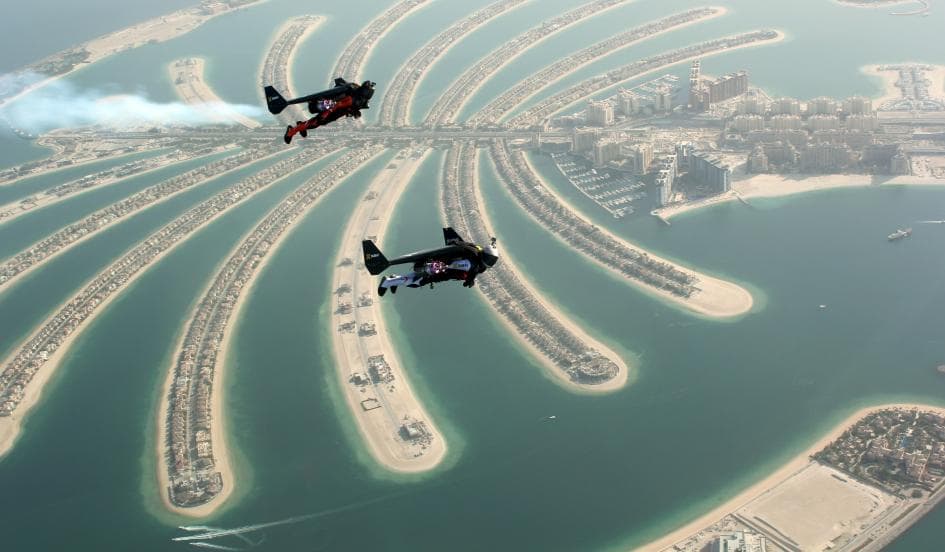 This seems like science fiction—like something straight out of a Christopher Nolan film. But it is real. Watch two men fly through the air on jetpacks that are traveling at 124 miles per hour (200 kmh).

In the 12 minute video, the action starts really starts at 6.26, when the duo dive over Dubai, hurtling out of a plane and circling over the city's famous Palm Islands. From here, they head to the Burj Khalifa, which is the tallest building in the world.

Of course, this is not the first time that a human has flown by jetpack. Indeed, if it was the first time, going up several thousand feet and jumping out of a plane may not be the best way to test the new technology. In 2006, just 9 years ago, Yves Rossy became the first person in history to ever successfully fly with a jet-propelled wing. To date, he has flown over a number of natural wonders and notable man-made structures, including the English Channel, the Swiss Alps, and now, one of the most famous cities on Earth.

It does give you a bit of hope, shining a light on even the most (seemingly) impossible ideas. "If you have a dream, if you have an idea, even if it's crazy — try it," Rossy says in the video. "Flying is a really old dream of the human, and we are pushing the realization of that dream."

Ultimately, the tech is powered by four engines. Each pack weighs around 121 pounds and has a wingspan that is more than 6 feet in length.

(someone buy me one)