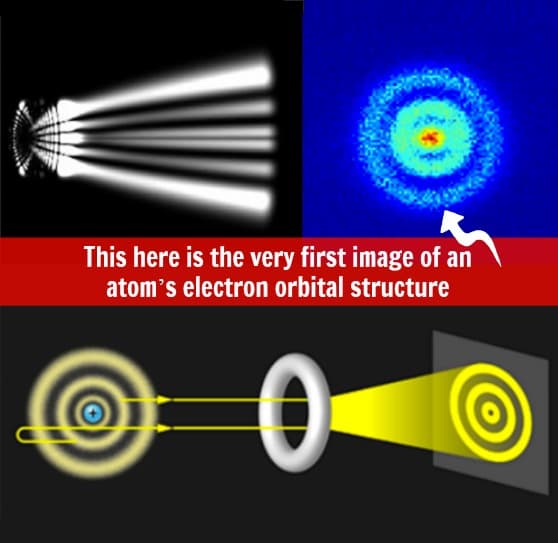 That blue, pixelated image, ladies and gentlemen, is the very first image of an atom’s electron orbital structure. In other words, you’re looking at the first picture of an atom’s wave function.

Here, scientists are gazing into the structure of a hydrogen atom, the simplest atom in existence. Until very recently, scientists have been restricted to using mathematical equations and formulas to describe the wave functions of atoms – after all, when you’re dealing with something that small (super-microscopic?), simply sticking a conventional microscope on it won’t work. This is why an international team of physicists turned to a quantum microscope, which is a rather simple name for a device that uses photoinization microscopy to directly measure the atom’s structure.

As the name suggests, scientists fired laser pulses at the hydrogen atom. This process ionizes electrons forcing them to follow a particular path. From here, a detector plotted these electrons. The team took a large number of measurements and averaged out the disturbance patterns of the data they collected. The end result is a very ‘crisp’ image of a hydrogen atom’s wave function magnified more than 20,000 times.

Per the image release, in the image on the left, we see examples of four atomic hydrogen states. :The middle column shows the experimental measurements, while the column at right shows the time-dependent Schrödinger equation calculations — and they match up rather nicely."