The Fine Line Between Conspiracy Theory And Rational Skepticism (io9) 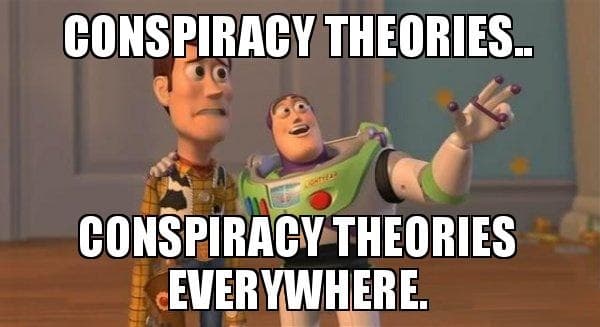 This is a blog post from i09 that we are reposting, it discusses the fine line separating conspiracy theories and rational skepticism.

As some of you may have surmised, I have a passing interest in conspiracy theories. As a philosopher, I am fascinated by some of the fantastical contrivances that slip out of the mouths of people like Alex Jones and David Icke. My fascination stems from genuine curiosity, with specific regard to how anyone could rationalize the world so poorly. Flawed logic, paranoia, and grand schemes are hallmarks of conspiracy theories. It takes a certain instinctual thought process to hear hoofbeats and think zebras.

I'm writing this for two reasons: The first is that this post is a sort of one-way continuation of a discussion between my closest friend and I. The second is this comment which appeared on Gawker this morning:

A true coincidence reveals the lie. In the first instance, a Malaysian Airlines 777 is accidentally shot down by American war game forces in the Pacific, this cannot be admitted to and all that follows is a lie. In the second instance, CIA-backed clandestine forces intentionally down a passenger jet over eastern Ukraine, having primed Western populations to blame Russia over other actors or countries—the intent, to turn the public against Russia and generate all manner of pretexts for open Western-backed isolation/aggression against Russia. However, a great and most unforeseen coincidence occurs, the second 'incident' mirrors the first in such emblematic similarities (i.e. same airline company and airplane type) as to become a flag connecting the two (through the near impossibility of chance and the near certainty of lies) and revealing a web of misdirection, deception, and strategically murderous raisons d'État in a manner that can only be described as an accusatory actus Dei against the American dark state.

The above comment was a response to Aleksander Chan's Malayasian Airline coverage. While easy enough to laugh off for most, the comment is meant to "make us think". It has everything: CIA clandestine activities, shadowy geopolitical war games, something called the American dark state, and French and Latin phrases intended to convey the idea of reason and education to the uninitiated. Run of the mill tropes in conspiracy circles all tend to center around one thing: everything bad that happens is the result of some clandestine activity and is leading up the inevitable condition of slavery of which we all will become a part. Whether it is the NWO conspiracy, 9/11 truth, FEMA, or Reptilians, all of these theories are the result of paranoid delusions.

With regard to the discussion a friend and I were having, it became apparent to me that there has to be some sort of invisible dividing line that separates "paranoid conspiracy theorist" and "rational skeptic". The notion came to me as my friend was stating that he does not hold the 9/11 truth conspiracy to be valid, but that he is skeptical of those people who claim certainty in regards to the United States not having orchestrated the attack. Now, I stopped just short of calling him a pyrrhonian skeptic, but the whole conversation peaked an interest.

In philosophy, I study fringe political philosophy among other things. Two writers / philosophers I greatly enjoy are Noam Chomsky and Howard Zinn. More of you are likely familiar with Chomsky's work more so than Zinn's, but these are two men very much cut from the same cloth. The approach they take is critical, calling out the American war machine in its propping up of dictators across the globe, as well as looking behind the curtain at the way the news media manufactures consent. Now if you were to replace the primary terms here (American war machine for American dark state; manufacturing consent for propaganda), it would appear that Zinn and Chomsky toe the line between conspiratorial and skeptical. The primary difference between Zinn, Chomsky and conspiracy theorists is that Zinn and Chomsky are actually taking time to intellectually pursue their ends. Or, put another way, Zinn and Chomsky are rational skeptics.

Empiricism, the scientific method, and rational skepticism are terms that can be used interchangeably. All three involve the investigation of a problem in order to prove or disprove a hypothesis. Two of these terms (empiricism and rational skepticism) are used in philosophy in much the same way as the scientific method, with the exception being that philosophers will all employ reasonable doubt as a tactic. This is because of the very famous rationalist, Rene Descartes. Cartesian doubt turned philosophy on its head, leading to a great deal of sub-philosophical schools. But perhaps the most important contribution Cartesian doubt made was the advent of empiricism. Empiricism, conjectured by George Berkeley and perfected by David Hume, takes the idea of reasonable doubt and puts it to the test. Essentially, if we have the need to verify the truth of something, then we ought to test the validity of the statement itself in order to know whether or not something is true.

What Hume was talking about was the difference between relations of ideas and matters of fact. Relations of ideas, for the purposes here, can simply be called innate knowledge. Math is something that exists, and 8 x 10 = 80; or, a star is a self-luminous gaseous spheroidal celestial body of great mass which produces energy by means of nuclear fusion reactions (by definition). Matters of fact, on the other hand, are learned by experience. So, you cannot know a matter of fact to be true always. For example, touching a stove will not always result in burning your hand. If the stove is on and hot, you will burn your hand. If the stove is off and cool, then you would not burn your hand. So, relations of ideas are always true, while matters of fact are true as they are experienced.

Now, you're probably wondering why the hell I wrote that. Well, it is to show you the difference in thought processes that go on between we rational people, and those people who like to believe in conspiracies. Conspiracy theorists accept that their contrivance is belonging to the nature of relations of ideas: The Malaysian airline shot down yesterday was the victim of an American plot to prop up the war machine and put us on a path to war with Russia. This statement is not true in and of itself, therefore it is not a relation of ideas. In this case, we must wait to see what unfolds in order to know what is going to happen. Essentially, the Humean cue ball is rolling towards the billiard ball and we are waiting to find out what happens when the cue ball strikes it.

The Dividing Line between Rational Skepticism and Conspiracy Theory:

So given what I have stated, it might be apparent that this dividing line, in some way, exists. That Chomsky and Zinn are able to intellectually approach a controversial topic and provide valid reasons for our introspection is testament to the idea that rational skepticism is a reasonable approach. Moreover, that conspiracy theorists reject this approach in favor of unreasoned, ill-informed propagation of batshit insane theories is testament to the fact that people still want to believe in the invisible enemy. However, there is a reason that people like Zinn and Chomsky have difficulty with mass appeal outside of academia and its small umbrella of overlap in mainstream culture.

Conspiracy theorists ruin the whole game for great academics like Howard Zinn and Noam Chomsky. Radio hosts like Alex Jones who prop up wild theories of false flag attacks effectively make the public uneasy about trusting people who take the more nuanced approach toward investigating the ills of the world. Nuance and cogency are rendered obsolete when people like Alex Jones are allowed to openly state that the United States intentionally kills its own citizens so that it can begin to rile the dogs of war. Nuance and cogency are replaced by scaremongering and unsoundness.

So where we draw the line between rational skepticism and conspiracy theory has to be based on how blunt one's approach is. Where Zinn and Chomsky tear down the illusion of a beautiful America attempting to help the world using big words and fancy writing, Alex Jones has the openness and blunt prose which is more effective. Rhetoric beats prose every time. So after the first line of information (bought and paid for in our corporate democracy) passes to the public, the next step is to look to what the "real news" is. What aren't they telling us about X? And doesn't it just seem more obvious that 9/11 was an inside job perpetrated by the Bush administration in order to rile up the dogs of war and set us on a path to Iraq and Afghanistan? Well, no. That's not rational. But, what if the 9/11 terror attacks were retribution for decades long imperialist foreign policy by the United States and its allies? Well that seems to make more sense.

So what this all comes down to is this: A conspiracy theory is an irrational, instinctual thought process which puts to the fore the greatest fears in our minds. The conspiracy theorist is deluded into believing that the fear they feel is the fear everyone else feels, and they find avenues of opening up the dark recesses of our minds to the "truth". The rational skeptic is that person who intellectually approaches a problem, investigates the problem rationally, deduces a conclusion, and affirms or rejects the hypothesis. The skeptic and the conspiracy theorist are, for all intents and purposes, in each others company, but the fine line that separates them is ultimately logic. They both hear hoofbeats, but only one thinks horses.