Cassiopeia A; The Star That Flipped Inside Out 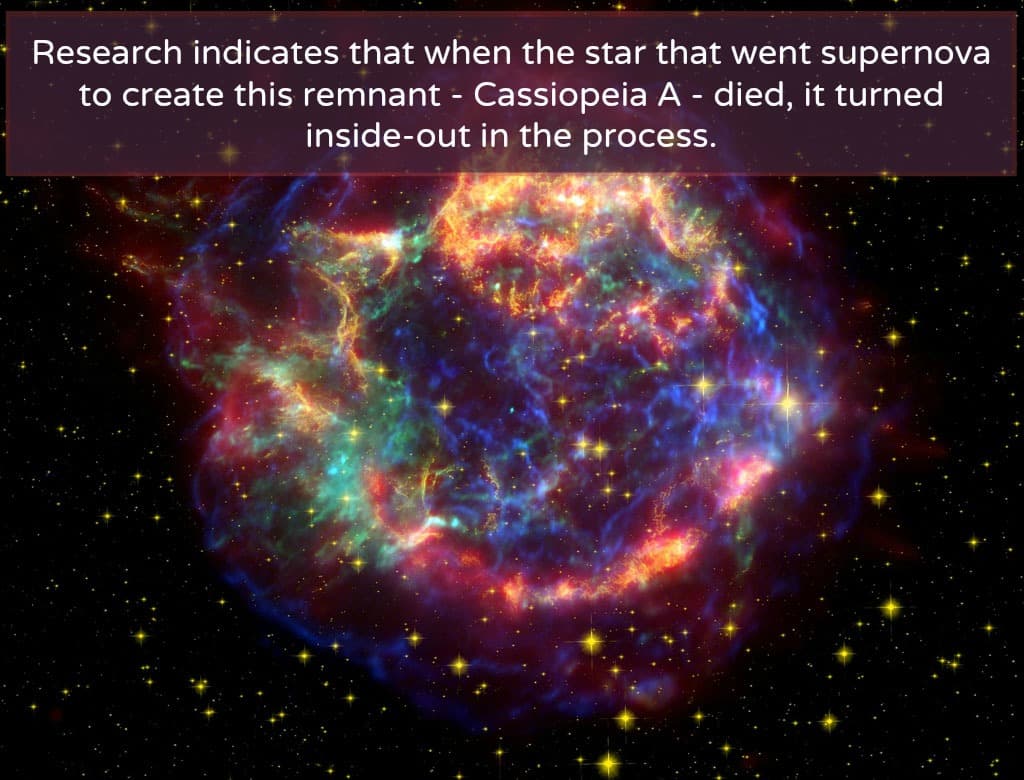 So we've seen stars that are literally the size of our solar system, stars that are a brilliant blueish-white color that live short lives and blowup brilliantly, vampire stars that stay young by siphoning material off of their companion, and now we've seen a star that turned inside out. Yes... you read that right. Astronomers have found a star that literally turned inside out when it was in its final throws of life. You couldn't - pardon the french - make this shit up. And lets be honest, why would you want to? The universe in general tends to surprise us with its abnormalities, and there is always something else to learn from each celestial object we point our telescopes toward.

The star in question is the one that gave way to the Cassiopeia A remnant (or "Cas A" for short), which is located about 11,000 light-years away in the constellation of Cassiopeia. The light from the fiery death of this star only reached our planet about 300 years ago, making it one of the youngest supernova remnants discovered in the Milky Way thus far.

This star is estimated to have been about three times more massive than the sun. And by taking a fresher look at the x-ray emissions from the Cas A remnant, astronomers were able to map the distribution of elements found within the wreckage of the massive star as it continued to expand outward over the course of 300 years. The debris was found to contain about 0.13 times the mass the sun contains in iron, 0.01 percent in magnesium and neon, and about 0.03 in sulfur and silicon. Furthermore, oxygen was, by far, the most abundant element detected in the remnant, which is difficult to detect because oxygen ions tend to be absorbed by gas in the interstellar medium between Cas A and Earth.

Interestingly, they were able to spot large clumps of almost pure iron in the outermost portion of the debris, which must have been produced in the core of the star when it was still undergoing nuclear fusion, pre-nova. Also, along the outer edge of the remnant there is silicon, sulfur, and magnesium; strangely, there is no evidence from the x-ray emissions to suggest any iron exists near the center of the remnant, where the neutron star lies.

The distribution of the elements seen in the Cassiopeia A Supernova remnant strongly indicate that the instability of the star, as its core began to compress under its immense gravity, was responsible for flipping the star inside out. Interestingly, it's quite rare for astronomers to be able to study the inner ejecta (or the remnants of the now-dead star) so early on, but some of the mass of the remnant was siphoned by a companion star close-by.

According to Una Hwang, who is an author of the paper recently published in the Astrophysical Journal, “[The mass loss] allows the shocks that light up the ejecta in X-rays to have made it nearly entirely through the star in just over 300 years, so that much of the ejecta can be observed....Even though Cas A is actually the second youngest supernova remnant in our galaxy, it’s virtually the only core-collapse supernova remnant that shows significant emission from iron ejecta.”

This is also important for another reason, it gave physicists an opportunity to investigate another poorly understood phenomenon: neutron star kick. Previously, we were able to deduce certain attributes of the process, including which direction the 'ejecta' should move in. With the Cas A remnant, the ejecta moved in the opposite direction of the neutron star at the center, which should hypothetically happen if the momentum was conserved. What they DIDN'T see, is the iron released following the same path.

“Believe it or not, the data can probably support at least a 4 times more detailed study, but it takes a lot of man and computer power,” said Hwang. “We hope that some theorists who are working on simulations of core-collapse explosions will take notice and realize that there is data out there that can begin to test their theories.”