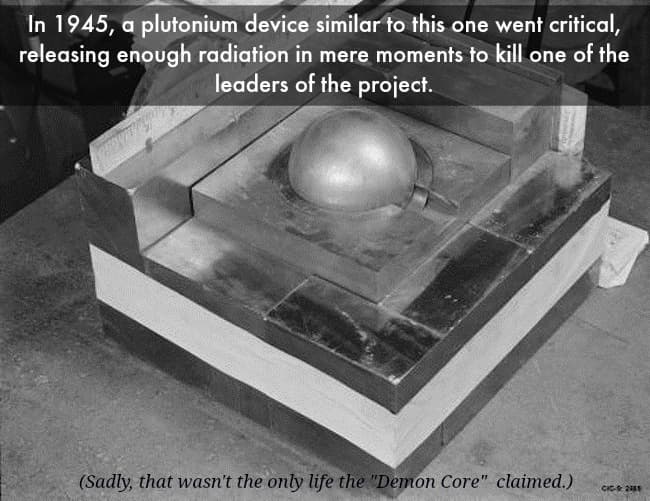 Have you heard of the Demon Core? Though it sounds like some kind of a superstitious group, rest assured that is not what it is. Instead it refers to the time in which scientists at the Los Alamos laboratories were killed in a series of horrible accidents, all while working on the same Plutonium core for a nuclear device. The slow and painful death of radiation poisoning this core inflicted on its victims made it definitely worthy of its nickname. It is a true legend of science (but it's not the only dramatic case of radiation poising from that era).

After the first bombs were detonated in Japan during World War II, scientists wanted something else to work on, besides the city destroying power of the single bomb. So what did they decide to do? Find out at what point a core of Plutonium goes critical and experiences a nuclear reaction.

Sure, there are major risks involved in this undertaking, but the purpose was to find more efficient ways for a core to go critical, thus improving the nuclear yield of these weapon. This was known as “Tickling the Dragon’s Tail” for the inherent danger of assembling the criticality device around the Core.

24-year-old Harry Daghlian started working at Los Alamos as a Physicist in 1944 as a member of the “Water Boiler” group, and later moved to the Critical Assembly Group, or “crew,” that was headed by Otto Frish at the Omega Site. As part of the crew, he was involved in the “Tickling the Dragon’s Tail” experiments.

On the 21st of August, 1945, Daghlian was involved with a series of experiments with a 6.2 kilogram sphere of P-239 Plutonium labeled in the labs as “49 Metal” with a series of tungsten carbide bricks. That morning he constructed a hollow 14 7/8” cube of tungsten carbide bricks around "49 Metal" and, with the help of a monitoring device like a Geiger counter, found that the assembly became critical with five layers of bricks and two additional bricks in the middle of the sixth layer.

That afternoon Daghlian constructed another cube 12 ¾” around the same "49 Metal." After completing the fifth layer he found the mass had gone critical. His main experiment was to find the right assembly to make the core go super critical on a completed cube. Deciding that was the end of the day for him, he disassembled the critical assembly and placed "49 Metal" in storage.

That night Daghlian was at a lecture and he decided he was going to try the assembly again that night instead of waiting until the next morning. He knew full well that broke two safety regulations: doing hazardous experiments alone and after hours, but he had made up his mind and arrived back at the Omega Site by 9:30 pm. and was greeted by 29-year-old Private Robert J. Hemmerly of the Special Engineer Detachment guard. Not his job to enforce Lab safety regulations, Hemmerly did not stop Daghlian from pulling "49 Metal" from storage and beginning his work.

Daghlian quickly completed four layers of tungsten carbide bricks using his monitoring device as a guide. At 9:55 pm the fifth layer was half completed. He had one more brick, and as he began to place it on the critical assembly his monitoring device alerted him that the addition of that brick would cause the assembly to go super critical. Daghlian slowly and cautiously removed the brick away from the assembly.

AND HE DROPPED IT:

There was a flash of blue light and a blast of heat as the "49 Metal" went super critical, dousing both Daghlian and Hemmerly with fatal levels of gamma radiation and beta burns. Reacting quickly, Daghlian knocked the brick away from the assembly, entering the blue glow which reportedly caused a tingling sensation. Private Hemmerly was sitting at his desk twelve feet away reading his newspaper, but was alerted with the bright blue light and the thud of the brick hitting the floor.

It is easy to imagine what must be going through Daghlian's head as he dissembled the device, in that instant, his life was effectively over. Harry Daghlian died 25 days later. He arranged for his body to be donated so scientists could study the effects of radiation on the human body. Pictures of Daghlian after exposure are available, though most are still classified. Hemmerly died 33 years later of radiation linked Leukemia.

21 May 1946, at 3:20 pm, Louis Slotin and seven other scientists were performing their own criticality experiment. Slotin was training his replacement Alvin Grave and really didn't need to do this experiment. Slotin was referred to as the Chief Armorer of the United States or, as he lovingly put it, the “bomb putter-togetherer.” In 1945, a plutonium device similar to this one went critical, releasing enough radiation in mere moments to kill one of the leaders of the project.

This particular experiment called for two beryllium coated half-spheres around a core, or in this case the very same "49 Metal" that had killed Daghlian the year before. The beryllium spheres would reflect the neutrons back to the Plutonium core increasing its criticality the more completely it was covered.

Usually, Slotin used spacers for keeping the spheres from closing completely, but had performed this experiment numerous times with just a single flat-head screwdriver. He felt very confident in performing this experiment, when, in retrospect, he was probably a little arrogant in showing off for his replacement. Using his hand to manipulate the screwdriver, he let the beryllium reflectors close closer and close, letting his neutron counters gauge the activity.

There was a flash of bright blue light as the core and reflectors began to glow blue as "49 Metal" went super critical. In that moment Slotin knew he was dead. He quickly tossed the top half of the beryllium sphere away from the core and onto the floor. Several of the men present ran from the room, but were called back to mark their positions. Slotin did some calculations and found that they only gotten enough radiation and beta burns to considerably shorten their lives, so they would live. Slotin had been exposed to more than any man ever had been exposed to.

The P-239 Plutonium core that killed Harry Daghlian and Louis Slotin was called the Demon Core because of its lethality to the scientists who worked on it. The Demon Core was detonated 1 July 1946 in the Pacific Ocean at Bikini Atoll as part of Operation Crossroads tests. This detonation was also referred to as the "Able Explosion."

Much to people’s relief, criticality tests were revised for safety and are no longer performed by humans but are instead robotically controlled in a separate building.

These incidents with the Demon Core (along with a lot of the lesser known atrocities of the second World War) are horrible reminders that the forces of nature should never be handled lightly.