The Death Stars of Orion: 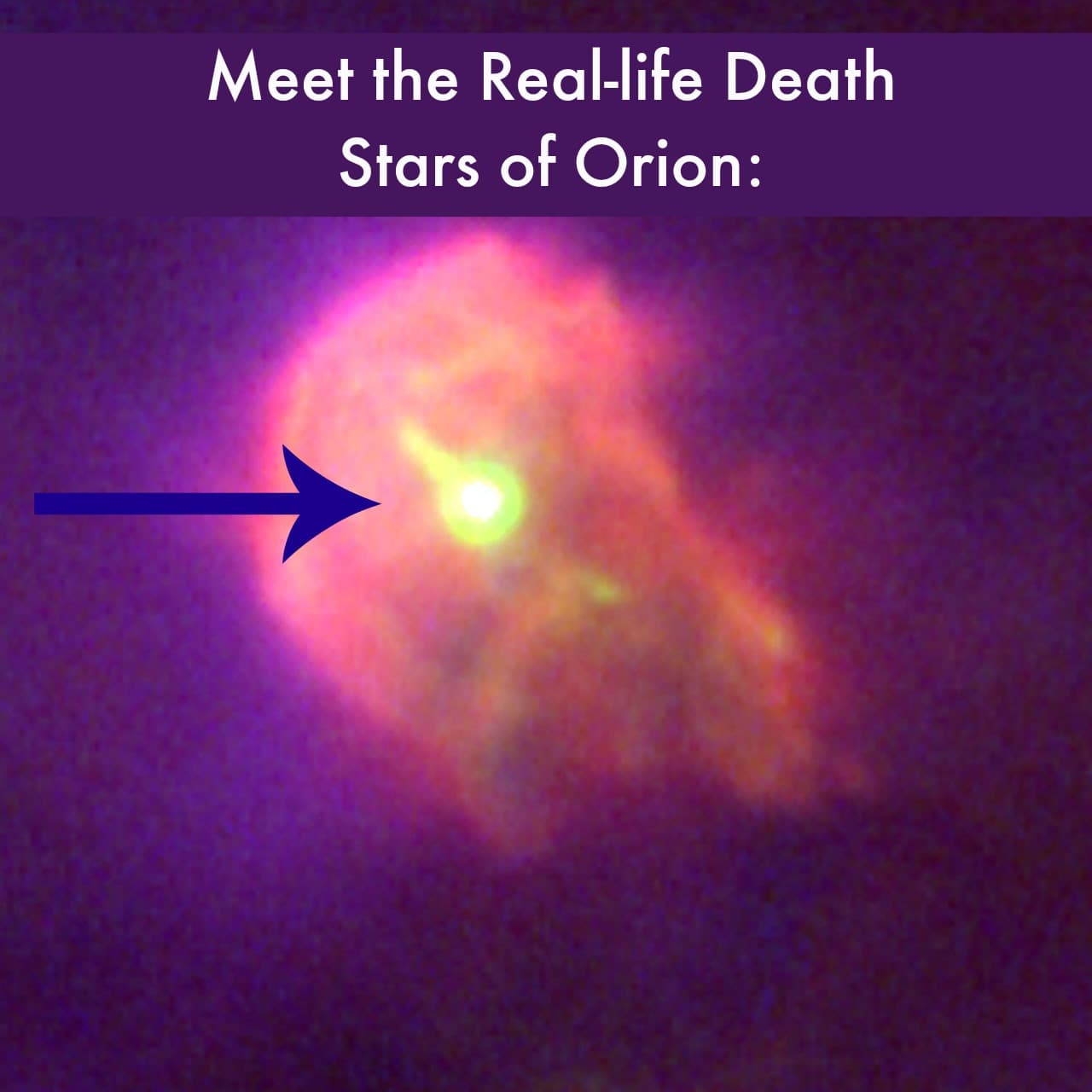 Yes, you read that correctly. Death stars do exist, but not as the space stations we see in Star Wars movies. Instead, they lurk outside of the various star factories in the ‘verse, blasting away the protoplanetary disks (or proplyds) of unsuspecting infant stars who may form too close.  We may have one or two such death stars hiding in a constellation not too far away.

The constellation Orion is home to one of the galaxy’s most prolific stellar nurseries – the Orion Nebula. Located approximately 1300 light-years from Earth, the Orion Nebula is home to a population of cosmic death stars, known as O-type stars. This deadly classification of main sequence star can be about 30,000-100,000 times as luminous as our Sun. O-type stars earn their deadly reputation due to the amount of ultra-violet radiation they emit. The radiation is hazardous to any infant stars close by, blasting away their surrounding gas and dust cocoon. Recently, a team of astronomers used the Atacama Large Millimeter/submillimeter Array (ALMA) to study the relationship between these O-type stars and nearby protostars.

The majority (if not all) of Sun-like stars are born in stellar nurseries just like the Orion Nebula. These crowded hubs of stellar development are packed with dust and gas reserves, everything needed to “grow” new planetary systems. If undisturbed, these protoplanetary systems will grow and evolve into fully fledged systems, eventually drifting away to their place in the galaxy. Astronomers used ALMA to observe several embryonic stars with such planet-forming potential and discovered clear evidence of galactic death stars in action.

The energetic photons emitted by the O-type stars heat up the protostar’s gas cocoon and strip it away. However, these stellar monsters are not completely evil; they are essential for new star development. When these massive stars run out of fuel, they die in a violent explosion known as a supernova. These explosions provide the nebula with the necessary ingredients to make new stars as well as providing the “kick” needed to initiate star and (ultimately) planet formation.

Thanks to ALMA’s sensitivity, astronomers were able to measure how proplyd dust and gas concentrations were affected by nearby O-type stars, and revealed Orion actually contains twice as many stars with protoplanetary disks as originally thought. Data showed protostars within 0.1 light-years (6 billion miles) would have most of their planet-forming capabilities blasted away rather quickly. However, protostars beyond the 0.1 light-year boundary retained enough of their protoplanetary disk to eventually form planets. Morale of the story: "death stars" are real and UV radiation is hazardous to proplyd health.