The Comets of Beta Pictoris 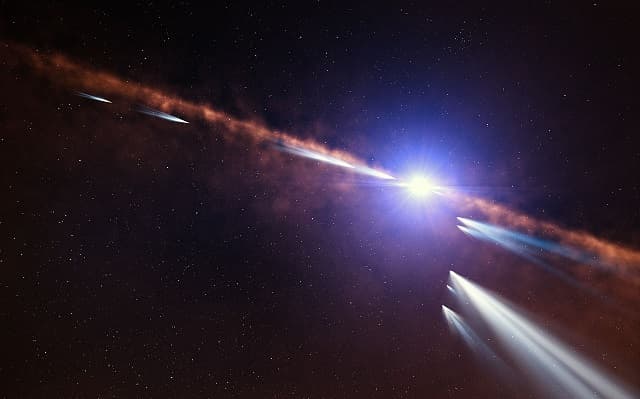 Just as we participate in a decadal census to track our population numbers here on Earth, scientists catalog and track the number of comets, along with other celestial bodies. This allows researchers to gather all sorts of data. A French team of astronomers turned their sights to Beta Pictoris, a young star located approximately 63 light-years from our Sun. Being a relatively young star, around 20 million year old, Beta Pictoris is surrounded by an active, swirling disk of gas and dust, produced by the evaporation of close-passing comets or asteroids colliding with the star. By utilizing the HARPS instrument on the European Southern Observatory's (ESO) 3.6-meter telescope, this team of astronomers has produced the most complete comet census we have today.

Flavien Kiefer, lead author on this study, describes the findings: "Beta Pictoris is a very exciting target! The detailed observations of its exocomets give us clues to help understand what processes occur in this kind of young planetary system."

For nearly three decades now, Beta Pictoris has been studied in detail, and by analyzing fluctuations in the star's brightness, scientists believed they were seeing comets traverse the young star. Comets are icy bodies, roughly a few miles across, which break apart into rock and gas when approaching the star.  As the light from the star passes through the gas, it gets distorted. The light produced by the comet's tails pales in comparison to the light produced by the star, so we can trouble distinguishing the comet light from the star light. Here's where HARPS comes in.

The High-Accuracy Radial velocity Planet Searcher (HARPS) instrument is the most sensitive planet hunting device we currently have here on Earth. It measures tiny changes in a star's spectral lines and has made many important discoveries over the years. The French team used data collected from 2003-2001 by HARPS, analyzed it, and counted nearly 500 comets orbiting Beta Pictoris. But that's not all! Astronomers discovered these comets can be divided into two different classes - old exocomets, and new exocomets.

The old exocomet class, is composed of comets that successfully survived multiple orbits around the star, while the new class contains comets that formed as a result of larger objects breaking apart. This type of cometary distinction is present in our solar system as well. The older, established family of comets are thought to have exhausted their ice supply after multiple encounters with Beta Pictoris, as indicated by their low production rates of gas and dust. The younger class of comets are very similar to the Kreutz family of comets, and could be fragments of a much larger body. A well-known example of a Kreutz comet is Shoemaker-Levy 9, which crashed into Jupiter back in 1994.

Overall, this study is incredibly exciting as it's the first one to tell us the physics behind the orbits for a large sample of comets. Close to 500 different comets were studied, with certain ones "watched" for several hours, multiple times per day. This type of analysis is unique, and as such yielded promising results. The team was able to measure the speed and size of the gas clouds, and were even able to infer how far away from the star the comet was, as well as the shape of its orbit.

You can read the full press release here. The findings will be published in Nature on Oct. 23, 2014. The ESO has created a video of what the Beta Pictoris comets might look like, you can view it here.