The Colors Coating the Treetops: Why the Sky is Blue 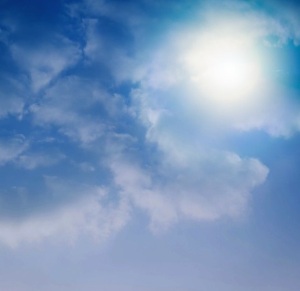 On a clear day, we can look up and see a bright blue sky. A common question is “why is the sky blue?” Well this is fairly simple to answer. Obviously, the sky doesn’t produce light on its own. Instead, the light is coming from the sun. The light we see in the atmosphere is called diffuse sky radiation (which for convenience I’m going to call DSR).

Before I get into what color it is and why, let’s start with why it is there in the first place. As you probably know, light naturally travels in straight lines. The only time it doesn’t travel in a straight line is if something else is acting on it, like gravity or matter. Since we’re talking about the atmosphere, we’re going to concern ourselves only with the latter of the two for now.

So we’ve established that light can have its otherwise straight path from point A to point B changed when it hits matter. So as the light from the sun comes to Earth and hits the atmosphere, it is scattered throughout the atmosphere and comes to us from all around, instead of just from the direction the sun is in. That’s DSR in a nutshell. Now, why blue?

That’s because of how the light scatters. The primary (but not only) cause of DSR in our atmosphere is something called Rayleigh scattering. This form of scattering does not effect the wavelength of the light, only the direction of travel. However the wavelength does determine how much it will be scattered. Shorter wavelengths are scattered much more than longer ones, so colors like red travel in fairly straight lines from the sun with only a little bit of scattering, while colors like blue are scattered all over everywhere, giving the sky its color. Which makes perfect sense since visible light goes from red (longest wavelength) to, uh, violet (the shortest wavelength). Okay, now for the real question. Why isn’t the sky violet?

Because violet light has a shorter wavelength, it does get scattered more-so than blue light. But there is a little more going on than just scattering. How we perceive light has a lot to do with it. The colors the human eye is most sensitive to are red, green, and yes, blue. So most of it is because the human eye can see blue light much, much better just because of how its receptors are built. So if we were to point a light sensitive sensor at the sky, it would “see” a lot more violet than we do. In reality, the sky has roughly equal amounts of blue and violet light (though the upper atmosphere absorbs violet light a little bit more than the other colors). The reason we don’t see the violet is simply because our eyes are constructed in a way that makes blue much more apparent, therefore drowning out the violet.