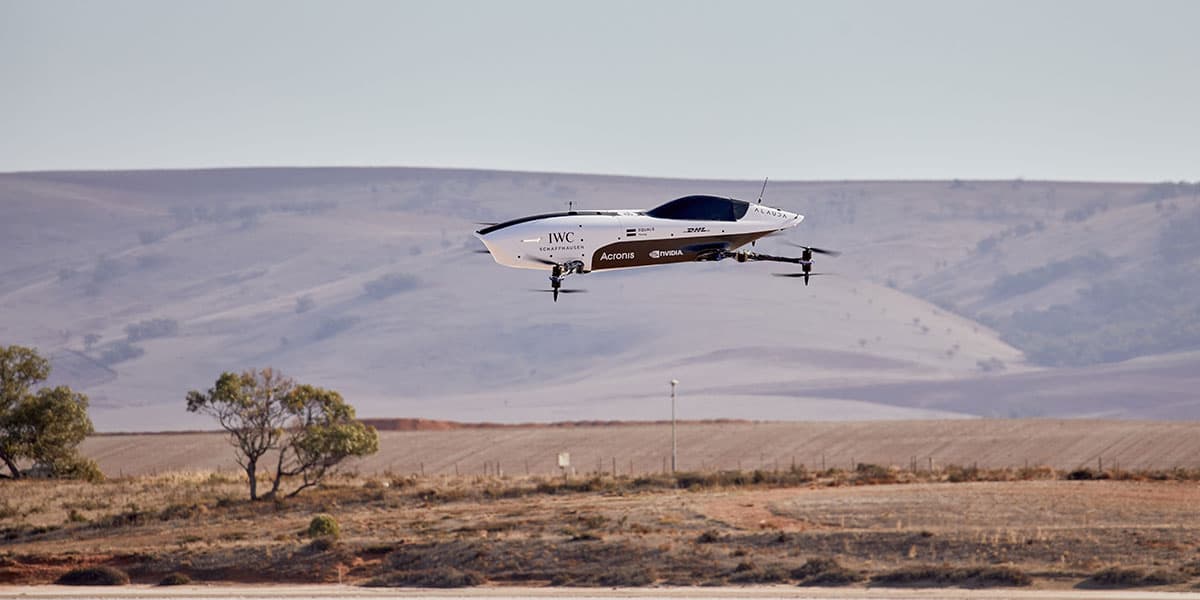 The world's first flying race car has taken to the skies for the very first time, setting the stage for an entirely new kind of racing league.

In February, Alauda Racing, an Australian eVTOL (electric vertical takeoff or landing) startup, revealed the Airspeeder Mk3, a sleek drone-like flying car built from the ground up for speed. Now, the Mk3 has taken off for the first time, over an undisclosed location in South Australia. In promotional videos, the sleek quadcopter takes off, and effortlessly fly laps over a desert-like landscape.

The quadcopter is meant to race against others of its kin as part of a tournament called EXA. Alauda is hoping to one day have up to four teams competing across three events worldwide. "They will race ‘blade-to-blade’ over locations inaccessible to traditional motorsport," according to a press release. A pre-season involving an "internal drag-race style competition between two distinct ‘works teams’ drawn from within Alauda," will soon be announced.

There's one big caveat however: the pilots, made up of both men and women, will not be behind the driver's seat. They will be steering the flying cars from a distance while inside a simulator. Their teams however will be tasked to replace batteries throughout the race, roughly speaking the equivalent of a pit stop in Formula 1 racing.

The Airspeeder Mk3 was still designed to emulate the frame of a flying car capable of hosting a human pilot. By itself, it only weighs 286 pounds and can lift 176 pounds — just about enough for a human pilot. The Mk3 is speedy, too. Thanks to its drivetrain that puts out 320 kilowatts of power, it can accelerate from 0 to 62 mph in just 2.8 seconds.

We can't wait for these sleek machines to get racing head-to-head. One day soon, maybe, human pilots could soon directly take over the reins on these things as well.

Air Ferry
Paris Will Use Electric Flying Cars to Get Passengers to the Olympics
11. 27. 21
Read More
Green Flying Cars
Study: Flying Cars Could End Up Being Greener Than Electric Cars
4. 30. 19
Read More
Formula E
Mercedes-Benz' First All-Electric Racecar Is Equipped Like a Beast
3. 4. 19
Read More
+Social+Newsletter
TopicsAbout UsContact Us
Copyright ©, Camden Media Inc All Rights Reserved. See our User Agreement, Privacy Policy and Data Use Policy. The material on this site may not be reproduced, distributed, transmitted, cached or otherwise used, except with prior written permission of Futurism. Fonts by Typekit and Monotype.