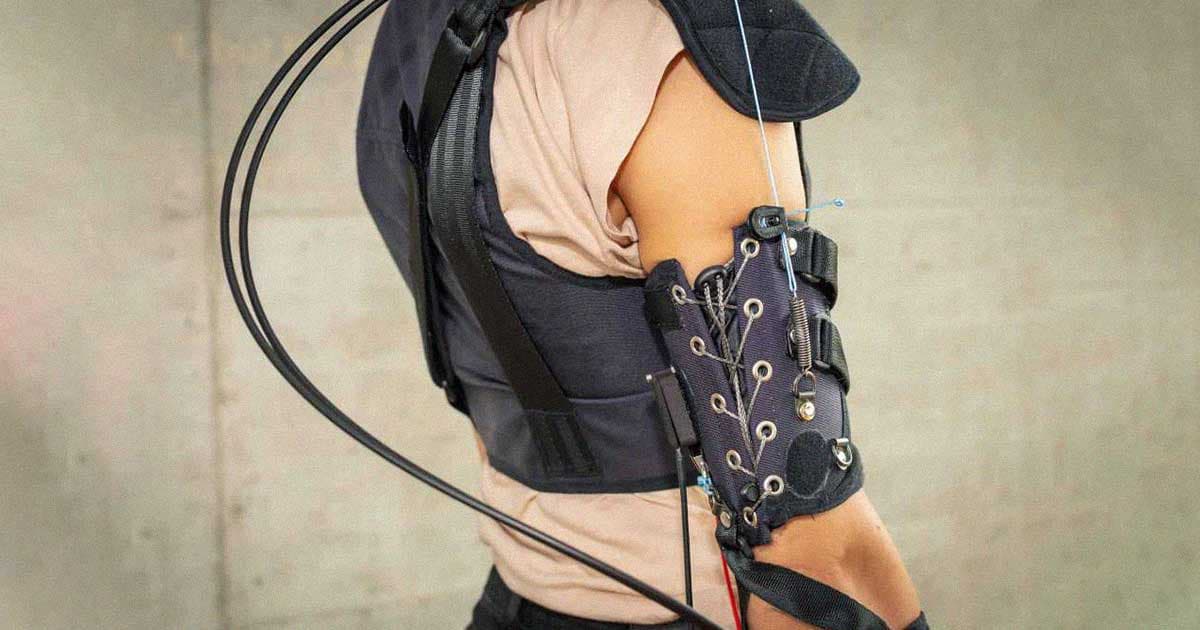 It's compact enough to fit underneath a shirt.

It's compact enough to fit underneath a shirt.

A team of researchers at ETH Zurich in Switzerland have created an intriguing new exosuit that's designed to give its wearer an extra layer of muscles.

The suit is intended to give those with limited mobility back their strength — and early trials are already showing plenty of potential, the scientists say.

The soft "wearable exomuscle," dubbed the Myoshirt, automatically detects its wearer's movement intentions and use actuators to literally take some of the load off.

The device is also impressively unobtrusive. The box housing the suit's electronics weighs a mere 8 pounds, the researchers say, while the shirt itself is thin enough to fit underneath clothing.

"Although hospitals have numerous good therapy devices, they are often very expensive and unwieldy," said Marie Georgarakis, a former ETH Zurich doctoral student and author of a new paper about the suit published in the journal Nature Machine Intelligence, in a statement.

In an experiment with 12 participants, including ten who didn't have any physical impairments, one person with muscular dystrophy, and one with a spinal cord injury, the team found the exomuscle enabled them to lift their arms for much longer.

For the participant with muscular dystrophy, the suit was able to increase endurance by roughly 60 percent. The person with the spinal cord injury was also able to perform exercises for three times as long a period thanks to the suit.

In other words, early results are promising. And the team is already looking forward to take the Myosuit out for a spin in the real world.

"In the next phase, we want to test our prototype outside the lab in the natural environment of future wearers and use the results to further improve it," said Michele Xiloyannis, co-author, in the statement.

More on exoskeletons: Japanese Company Creates Suit That Turns You Into a Towering Mecha

Hand That Feeds
A Wearable Robot Arm Makes You Work for Thanksgiving Leftovers
11. 23. 18
Read More
Exoskeletons are About to Walk Ford's Factory Floors
8. 8. 18
Read More
Pacific Rim's Robots Are Less Advanced Than Some of Today's Real Robots
3. 28. 18
Read More
+Social+Newsletter
TopicsAbout UsContact Us
Copyright ©, Camden Media Inc All Rights Reserved. See our User Agreement, Privacy Policy and Data Use Policy. The material on this site may not be reproduced, distributed, transmitted, cached or otherwise used, except with prior written permission of Futurism. Articles may contain affiliate links which enable us to share in the revenue of any purchases made.
Fonts by Typekit and Monotype.