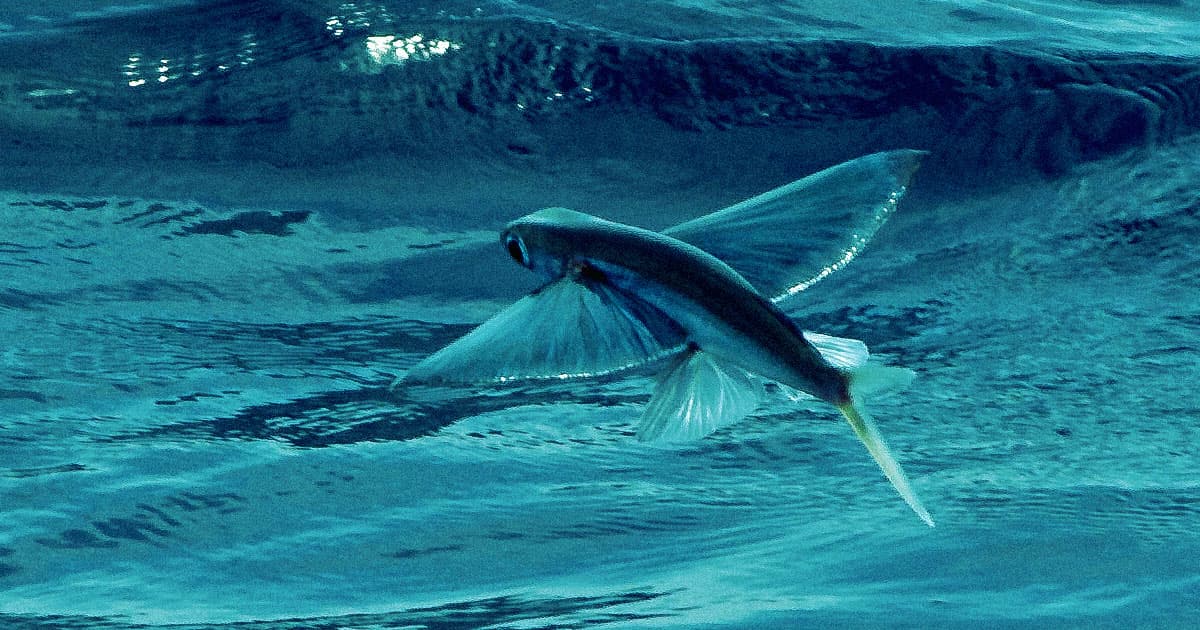 It can glide up to 85 feet thanks to its powerful propulsion system.

It can glide up to 85 feet thanks to its powerful propulsion system.

Fish out of Water

For environmental researchers, using robots to collect much-needed water samples can be tricky. The bot might have trouble navigating around trash while collecting samples from polluted waters, for example, or avoiding ice.

Now, researchers from Imperial College London have created a robot fish that can get around such obstacles — by propelling itself over them using a stream of water pushed out its rear end.

The researchers detail their creation of the flying robot fish in a paper published in the journal Science Robotics on Wednesday.

According to the paper, the bot uses a combustion chamber that fills with surrounding water via a pump, the bot's only moving part. The chamber also contains a small amount of calcium carbide powder, which, when combined with water, produces combustible acetylene gas.

An ignition system in the robot ignites this gas, forcing water out of the robot's rear and sending it flying into the air, where it can glide for a remarkable distance of 85 feet.

The researchers have already tested their flying robot fish in a lab, a lake, and a wave tank.

They're now looking to begin field trials of the bot to gauge its potential use for monitoring waters near offshore energy platforms and coral reefs — so if you're in the ocean and see a strange looking "fish" flying through the air while water shoots out of its butt, don't be alarmed.

READ MORE: Robot can launch out of the water and glide like a flying fish [New Scientist]

More on robot fish: Robot Fish Can Swim for 37 Hours With Blood-Powered Batteries

Force of Nature
"Biobots" Will Serve Alongside South Korean Soldiers by 2024
5. 13. 19
Read More
Watch These Animal-Inspired Robots Find Their Footing
5. 22. 18
Read More
New Nanorods Can Harvest Water From Dry Climates
6. 16. 16
Read More
+Social+Newsletter
TopicsAbout UsContact Us
Copyright ©, Camden Media Inc All Rights Reserved. See our User Agreement, Privacy Policy and Data Use Policy. The material on this site may not be reproduced, distributed, transmitted, cached or otherwise used, except with prior written permission of Futurism. Articles may contain affiliate links which enable us to share in the revenue of any purchases made.
Fonts by Typekit and Monotype.