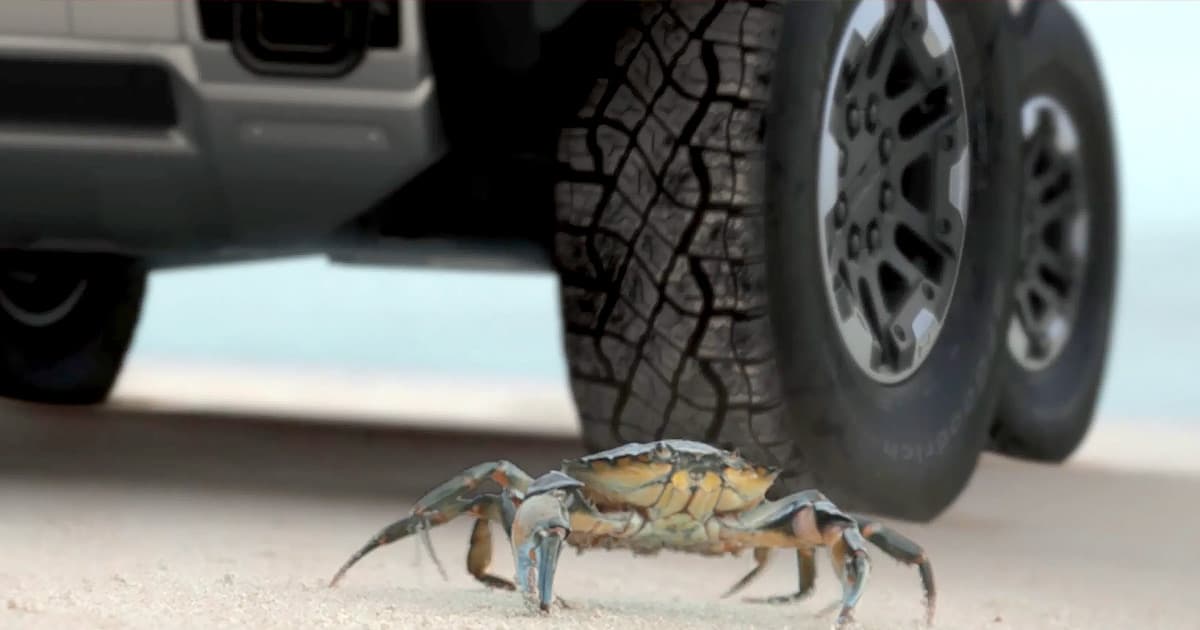 It can turn all four wheels to drive diagonally.

It can turn all four wheels to drive diagonally.

General Motors says it will finally fully reveal its long-awaited all-electric Hummer SUV to the world on October 20 — a resurrection of the long lost Hummer brand.

As part of its media push today, the carmaker has released a video showing off the upcoming vehicle's "Crab Mode," a feature that allows it to move in any diagonal direction by turning all four wheels.

The feature will allow the vehicle to navigate the tightest of spaces in spite of its substantial bulk. It's "functionality that is tailor-made for off-roading customers," according to a press release — and will allow drivers to spare the lives of crabs as well, according to the video.

The massive electric car was first teased in late January. The initial plan was to unveil it in May, but dates had to be pushed back due to the ongoing pandemic.

According to GM, the truck will go from 0 to 60 mph in just three seconds thanks to an up to 1,000 horsepower drivetrain generating up to 11,500 pound feet of torque.

Production will start in late 2021, with the first Hummers rolling off the lot not long after that — though GM has yet to announce any specific dates.

Interestingly, GMC's take on the all-electric SUV will come out right around the time that Tesla is shipping the first of its Cybertrucks, as The Verge points out. Tesla competitor Rivian will also start shipping its own electric pickup and SUV around the same time.

Car Talk
Consumer Reports: Tesla Autopilot "Distant Second" to GM's Driver Assistance
10. 28. 20
Read More
Trucks Given
Ford VP Disses Cybertruck, Calling Electric F-150 a "Real" Work Truck
9. 18. 20
Read More
A Tesla Semi Prototype Spotted in California is Swift, Sleek, and Silent
1. 20. 18
Read More
+Social+Newsletter
TopicsAbout UsContact Us
Copyright ©, Camden Media Inc All Rights Reserved. See our User Agreement, Privacy Policy and Data Use Policy. The material on this site may not be reproduced, distributed, transmitted, cached or otherwise used, except with prior written permission of Futurism. Articles may contain affiliate links which enable us to share in the revenue of any purchases made.
Fonts by Typekit and Monotype.