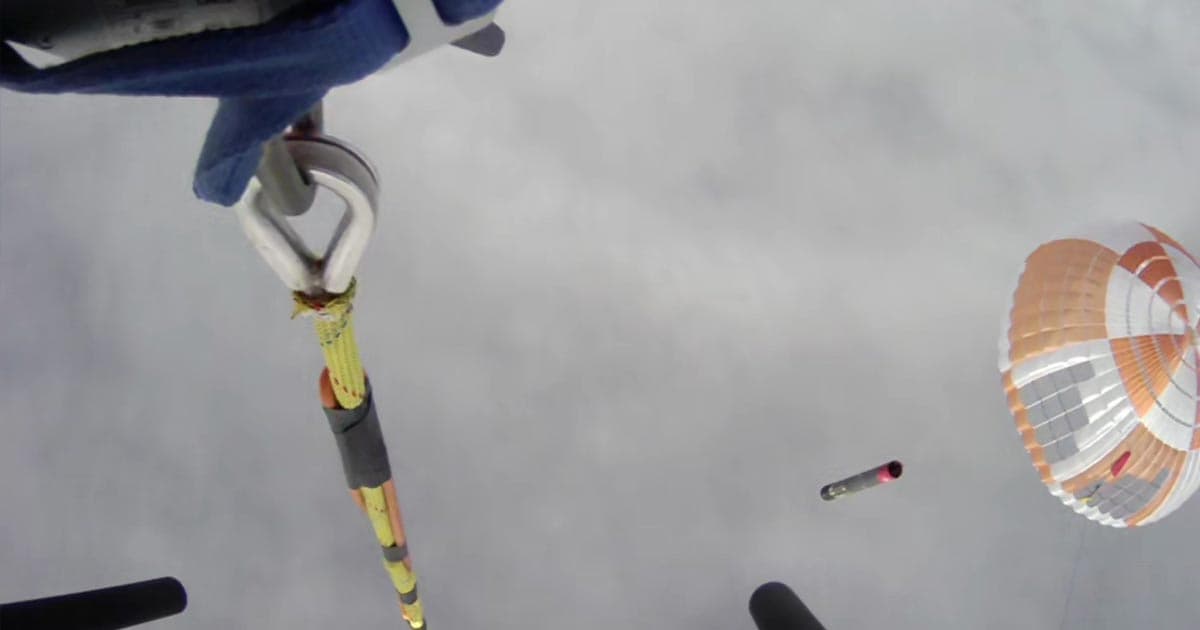 New Zealand-based space startup Rocket Lab pulled off an amazing stunt on Tuesday: it caught the first stage of its Electron rocket with a helicopter as it made its parachute-aided descent after launching into space.

The amazing stunt was caught from multiple angles, including a first-person view from inside the helicopter. A video shared on social media by Rocket Lab CEO Peter Beck shows the two pilots slowly approaching the orange and white parachute, with the 55-foot rocket motionlessly floating below it.

It's an amazing feat and marks the first time a rocket stage has been caught by a helicopter — a clever new way of recovering rocket parts.

This is what it looked like from the front seats. pic.twitter.com/AwZfuWjwQD

But not everything went according to plan. Several moments after the helicopter snagged the booster 6,500 feet above the ocean, the pilots noticed "different load characteristics," and opted to release the rocket.

There 🚀and back again 🪂 pic.twitter.com/GEsOmpYKFh

The rocket stage, however, was later fished out of the ocean. The payload the rocket was carrying into space, some 34 satellites, successfully made it into orbit.

"Incredible catch by the recovery team, can’t begin to explain how hard that catch was and that the pilots got it," Beck said on Twitter following the stunt. "They did release it after hook up as they were not happy with the way it was flying, but no big deal, the rocket splashed down safely and the ship is loading it now."

The team is hoping to collect all the data and try again.

"From here we’ll assess the stage and determine what changes we might want to make to the system and procedures for the next helicopter catch and eventual re-flight," Beck said in a statement.

READ MORE: Rocket Lab captures booster in mid-air with a helicopter for the first time [Engadget]

More on the stunt: This Startup Is Catching a Rocket With a Flippin' Helicopter!

A Private Company Just Successfully Launched Their Rocket Into Space
5. 25. 17
Read More
Seat With a View
Passenger Jet Flies Over Launchpad Right as SpaceX Rocket Takes Off
3:22 PM
Read More
Pizza Personnel
Domino's Buying Hundreds and Hundreds of Electric Delivery Vehicles
Nov 23
Read More
+Social+Newsletter
TopicsAbout UsContact Us
Copyright ©, Camden Media Inc All Rights Reserved. See our User Agreement, Privacy Policy and Data Use Policy. The material on this site may not be reproduced, distributed, transmitted, cached or otherwise used, except with prior written permission of Futurism. Articles may contain affiliate links which enable us to share in the revenue of any purchases made.
Fonts by Typekit and Monotype.