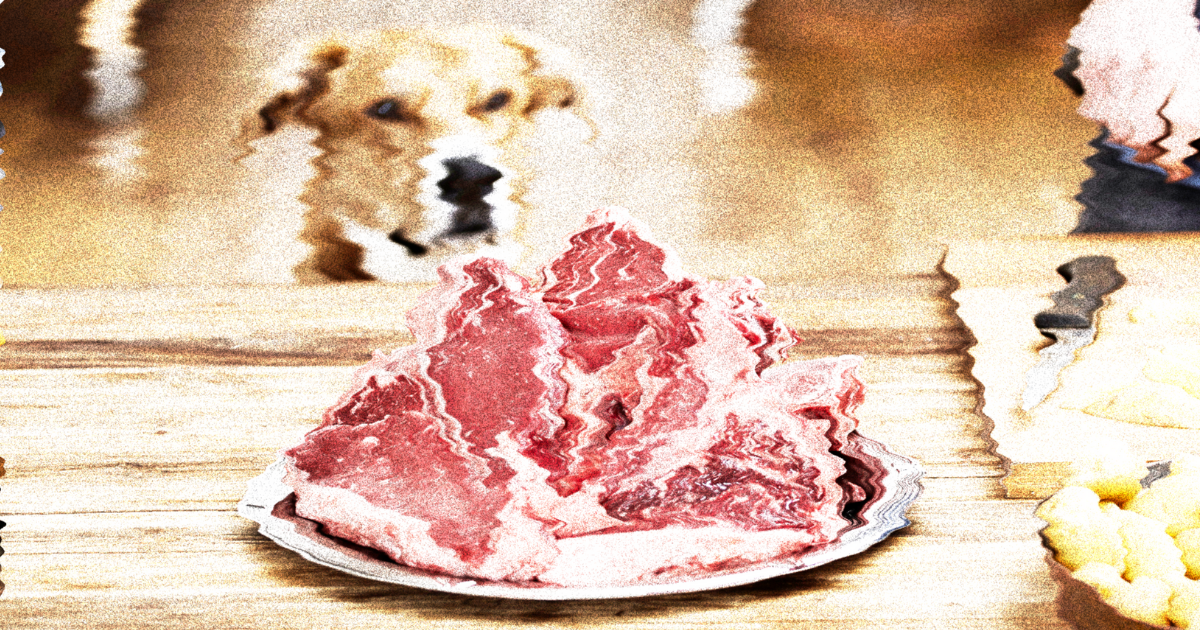 A nonprofit that wants people to eat less meat is funding research finding that a vegan diet is better for dogs.

According to a new report published in the Guardian yesterday, a peer-reviewed study of 2,500 dogs found that vegan dogs took less medication and visited the vet less frequently than their meat-eating brethren. Researchers on the study, published in the journal PLOS One, found — surprisingly — that dogs eating conventional omnivorous diets appear to be less healthy than dogs eating vegan chow.

"Our study is by far the largest study published to date," Prof Andrew Knight at the University of Winchester, who worked on the study, told the Guardian.

Not trying to bust anyone's bubble, but vegan diets have been called a "gray area" in canine health at best and aren't recommended by vets unless owners purchase a high-quality "complete" food that includes heavy vitamin and mineral supplementation. Back in 2021, a now-banned TikTok influencer called That Vegan Teacher had to post a video of her vegan dog to show concerned viewers she was still alive. One expert in the Guardian report echoed the same concerns.

"Although we would not recommend it, it is theoretically possible to feed a dog a vegetarian diet," Justine Shotton, the president of the British Veterinary Association, told the outlet.

Notice Shotton mentioned vegetarian diets, which can include some animal products like eggs, rather than a vegan one, which allows no animal products at all, even though dogs are widely understood to be meat-loving omnivores.

Another eyebrow-raising factoid is the study being paid for by ProVeg, an organization that wants to reduce meat consumption and previously invested big bucks in a vegan dog food company.

It's also worth noting that the study had clear limitations. It was based on an online survey, for instance, and mostly included individuals in the UK. They also included only pets who'd been seen by a vet in the previous year, and whose human guardian felt confident in the vet's report. That means owners who fed vegan diets but didn't see their vet weren't included.

Reducing meat consumption would have huge positive impacts on the climate. Factory farms are some of the worst polluters on Earth. But experts say vegan diets can make dogs seriously ill, and the American Kennel Club says your pooch should avoid them.

Until a study comes out that isn’t funded by a vegan organization with a stake in a vegan dog food company, we'll continue being skeptical of vegan diets that aren't heavily supplemented and monitored by a vet.

High Up
Only the Poorest People in North Korea Want to Live in the Tops of High-Rises
Apr 17
Read More
Brands We Love
This Smart GPS Dog Collar Could Prevent Your Pooch from Becoming a Statistic
3. 1. 21
Read More
Brands We Love
This $20 Virtual Gardening Master Class Is the Secret to Finding Your Green Thumb
9. 2. 20
Read More
+Social+Newsletter
TopicsAbout UsContact Us
Copyright ©, Camden Media Inc All Rights Reserved. See our User Agreement, Privacy Policy and Data Use Policy. The material on this site may not be reproduced, distributed, transmitted, cached or otherwise used, except with prior written permission of Futurism. Fonts by Typekit and Monotype.