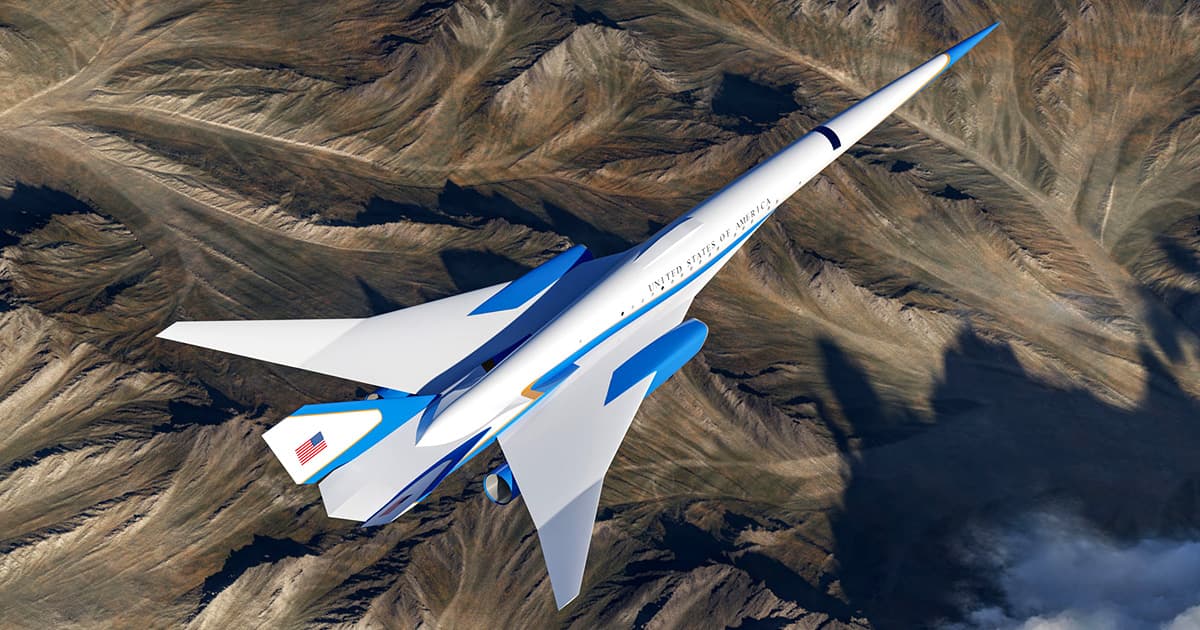 US Military Working on Supersonic Air Force One

Executive class at faster than the speed of sound.

Executive class at faster than the speed of sound.

Last year, Californian startup Exosonic revealed that it's working with the US Air Force on a supersonic Air Force One jet that could be used to ferry the US executive branch around the globe at twice the speed of sound.

Now, CNN got an exclusive look at the interior of the 31-passenger jet. The craft is based on a larger 70-passenger commercial airliner concept and has all the bells and whistles that one might expect on a plane to be used by the likes of a US president or vice president, from quartz fittings to private suites designed for top secret meetings.

"With this concept we are planning to implement new technologies that are not available today or that you don't (yet) see on commercial or business aircraft," Exosonic principal interior designer Stephanie Chahan told CNN during a virtual walkthrough.

Twice the Speed of Sound

That's not quite as fast as Mach 5, or five times the speed of sound, initially reported last year, but there might be a good reason for the downgrade.

"Low boom allows travelers to fly at supersonic speeds without generating disruptive booms for those on the ground," CEO Norris Tie told CNN.

As expected, the jet's interior is decked out to the gills. The jet's rotatable seats are clad in luxurious wooden shells and feature storable video monitors.

"So whether they're flying the vice president or the first lady, or the first gentleman, we'd have a lot of flexibility here," Chahan added.

Exosonic expects to roll out a finished version by the mid-2030s, as Tie told CNN.

Getting the US president from one corner of the planet to another at the drop of a hat may not seem like the biggest priority, but having top officials show up in the right place at the right time is often more than just a symbolic gesture, particularly when it comes to natural disasters or war.

READ MORE: Exclusive look inside the US supersonic presidential jet

More on the jet: Air Force One's Successor Could Go 5x the Speed of Sound

So Beautiful
NASA's Stunning Image: Supersonic Shockwaves Smashing Together
3. 9. 19
Read More
We Are Witnessing the Return of Supersonic Travel
12. 10. 17
Read More
This Material Could Allow NASA Planes to Cross the Country in Under an Hour
10. 18. 17
Read More
+Social+Newsletter
TopicsAbout UsContact Us
Copyright ©, Camden Media Inc All Rights Reserved. See our User Agreement, Privacy Policy and Data Use Policy. The material on this site may not be reproduced, distributed, transmitted, cached or otherwise used, except with prior written permission of Futurism. Articles may contain affiliate links which enable us to share in the revenue of any purchases made.
Fonts by Typekit and Monotype.