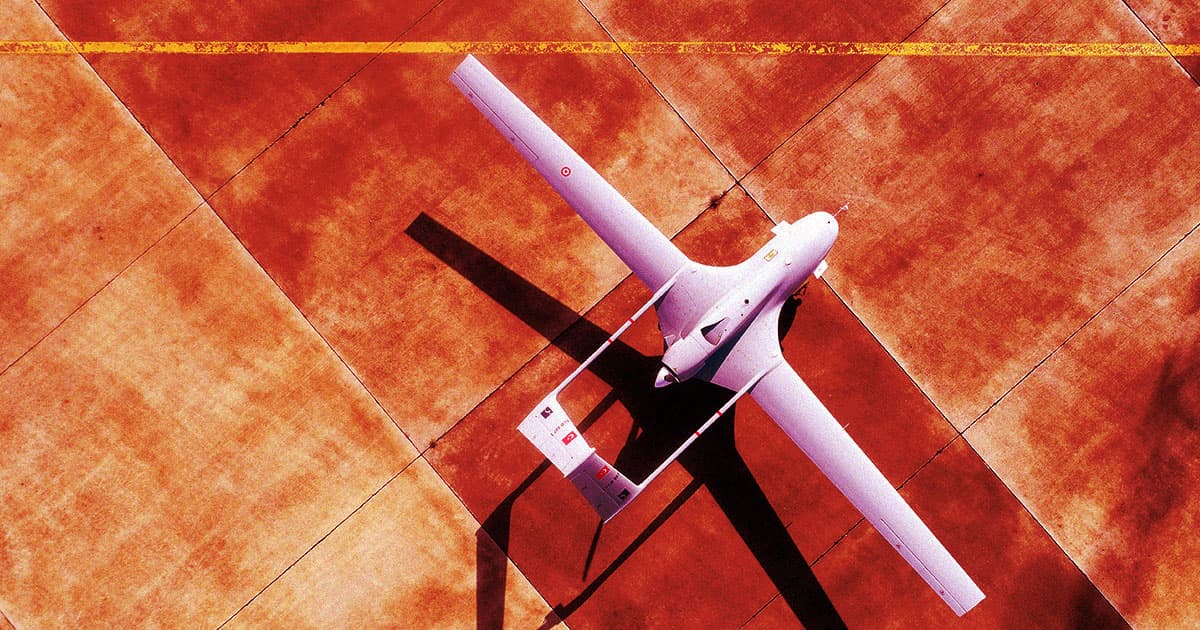 Elite Ukrainian Drone Pilots Are Reportedly Making All the Difference

It's a massive, coordinated effort. And it appears to be working.

It's a massive, coordinated effort. And it appears to be working.

A group of expert Ukrainian drone pilots called the Aerorozvidka are reportedly helping slow down advancing Russian troops by striking when the invading forces sleep — a show of force that demonstrates the power of using drones in 21st century warfare.

According to a new report in the UK outlet The Week, the group's strategy has impressed Western military officials by using the relatively inexpensive and effective devices, Turkish-made TB2 unmanned aerial vehicles, to carry out air strikes on tanks, supply trucks and other targets.

"Russian forces are static when night falls," a member of the group told the Times, another UK publication. "Their fear of Ukrainian shelling [is] forcing them to hide their tanks in villages between houses, knowing that conventional artillery cannot risk hitting civilians."

One Ukrainian drone pilot also told the Times that the drones are impossible to see at night and can get close to targets without causing collateral damage.

It's a considerable effort: there are 50 squads of drone pilots on the team, according to the unnamed pilot.

While it's not clear if all Aerorozvidka pilots are using the same drones, it's possible they could soon make use of American-made drones as well.

The Biden administration announced this week that the US will include "100 Tactical Unmanned Aerial Systems" in an upcoming aid package.

According to NBC, those aerial systems are likely one of two types of drones known as Switchblades, which can remotely hit targets miles away with deadly accuracy. Putting Switchblades, which are essentially single-use "kamikaze" bombs, in Aerorozvidka hands will arguably only help the country defend itself.

There's just one problem. Experts have been outraged at Russia's use of similar killer drones that use artificial intelligence to decide who lives or dies. So far, there's been no significant backlash against the US for sending Switchblades to Ukraine, but some experts are concerned about the possibility of inciting a nuclear war.

We're rooting for Ukraine, but these drones are a bleak reminder that deadly weapons, even in the hands of the "good guy," are still designed to take human lives in war.

More on the European conflict: Hackers Deepfaked a Video of the Ukrainian President Telling His Soldiers to to Surrender

Burning Bridges
Elon Musk Says He Can't Give Free Starlink to Ukraine Anymore After Officials There Were Mean to Him
10. 14. 22
Read More
Read the Room
Elon Musk Fans Horrified as He Suggests Ukraine Give in to Putin's Demands
10. 3. 22
Read More
Finger Pointing
Russia Warns That Nuclear Plant It Captured May Leak Waste Over Europe
8. 18. 22
Read More
+Social+Newsletter
TopicsAbout UsContact Us
Copyright ©, Camden Media Inc All Rights Reserved. See our User Agreement, Privacy Policy and Data Use Policy. The material on this site may not be reproduced, distributed, transmitted, cached or otherwise used, except with prior written permission of Futurism. Articles may contain affiliate links which enable us to share in the revenue of any purchases made.
Fonts by Typekit and Monotype.