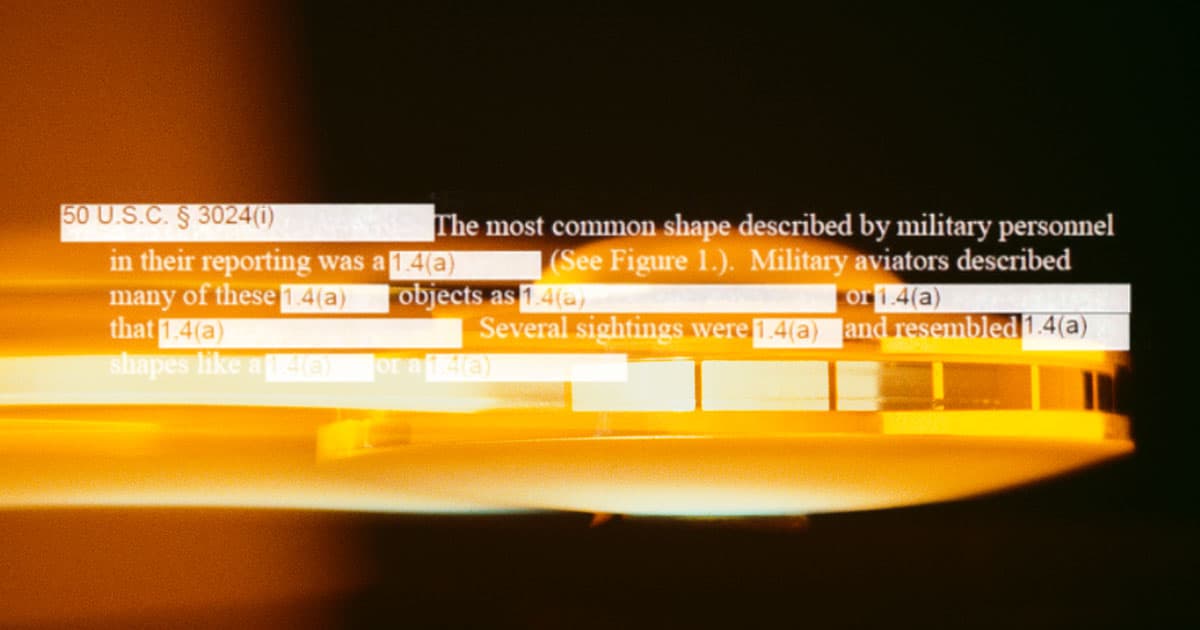 Name a better duo than the US government and hiding secrets about UFOs. We’ll wait.

While the Pentagon has in recent years started trickling out documents acknowledging its interest in unidentified aerial phenomena (UAP) — its rebranded term for good old fashioned "UFOs" — much of it has been redacted due to its sensitive nature. However, what the releases do reveal can be intriguing.

Case in point: The Black Vault, a privately owned database of declassified records, has now acquired the classified version of that infamous UFO report that the Director of National Intelligence sent to Congress back in June 2021.

While an enormous amount of the document is redacted, including almost every potentially interesting portion, what we can see is certainly eyebrow-raising. One lengthy redaction concerns "common shapes" of UFOs, for instance, and another appears to describe a report of a Navy pilot describing some sort of aerial encounter.

The document also contains numerous instances in which it described the most "common shapes" of UAP. While the description of the shapes themselves were redacted, even the existence of that section wasn't included in the report originally released to the public last year.

Other sections of the report such as "And a Handful of UAP Appear to Demonstrate Advanced Technology" and "UAP Probably Lack a Single Explanation" are also expanded on with the newly released document. The former includes a section, for instance, in which multiple Navy personnel witnessed UAP.

One new account said that a pilot was "fighting to keep his aircraft in the airspace," apparently due to high winds, when they witnessed a UAP whose "position was unaffected."

The entire document is available for download at The Black Vault. Like we said, it’s heavily redacted — but there’s still a lot of intriguing elements in it. Often, what they leave in can tell you a lot about what they leave out.

More on UFOs: Pentagon Document Tells How to Answer Questions About “Extraterrestrial Technology”