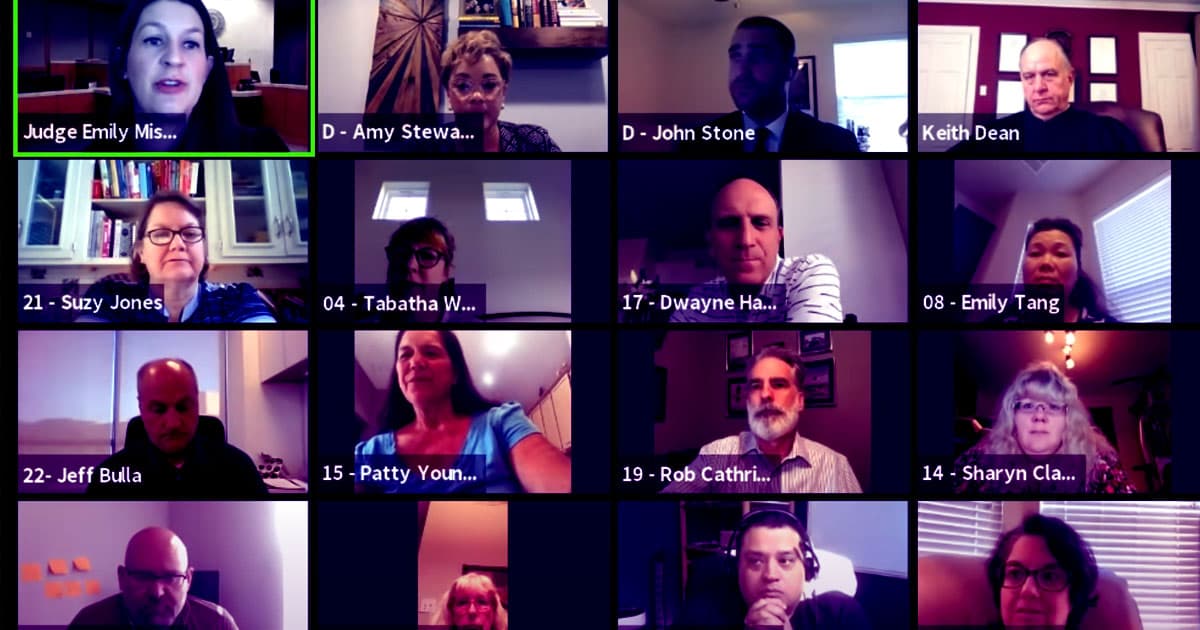 The future of law is unfolding on videochat.

The future of law is unfolding on videochat.

A courtroom in Texas is holding what is believed to be the first virtual trial over the videoconferencing program Zoom. It's a real trial for a real case, but the court is also using it as an experiment about how to conduct legal proceedings during the pandemic.

The case, a dispute over insurance policy, was held in a condensed format on Monday, Reuters reports. The novelty of the situation revealed a number of issues that the legal system needs to sort out.

During the trial, Judge Emily Miskel frequently helped jurors with tech issues. In the jury selection part of the trial, which Miskel uploaded to YouTube, several potential jurors had trouble using Zoom.

Some jurors spoke without realizing they were muted, others needed help adjusting their displays, and some disconnected from the call — all glitches that Miskel had to stop the proceedings to fix.

The rest of the trial occurred behind closed doors, so it's unclear whether the tech hiccups continued. But, Gizmodo reports, the use of videoconferencing could lead to more problems down the road, especially regarding new forms of bias.

Jurors may decide someone with a home office is more credible than someone sitting in a small apartment, for instance — raising questions about how fair a videoconference trial really can be.

More on virtual law: Virtual Reality Could Be Used to “Transport” Jurors to a Crime Scene

Stranded
Man Lost at Sea for 30 Days Says It Was a "Nice Break" From Pandemic
10. 8. 21
Read More
Throwing Memes
Chinese State News Agency Floods Social Media With Anti-America COVID Memes
8. 10. 21
Read More
Bot Versus Bot
A Bot Made Frank Sinatra Cover Britney Spears. YouTube Removed It Over Copyright Claims.
11. 27. 20
Read More
+Social+Newsletter
TopicsAbout UsContact Us
Copyright ©, Camden Media Inc All Rights Reserved. See our User Agreement, Privacy Policy and Data Use Policy. The material on this site may not be reproduced, distributed, transmitted, cached or otherwise used, except with prior written permission of Futurism. Articles may contain affiliate links which enable us to share in the revenue of any purchases made.
Fonts by Typekit and Monotype.