An AI tool made Frank Sinatra sing Britney Spears' "Toxic." What followed was a battle over who owns the rights when AI gets creative. 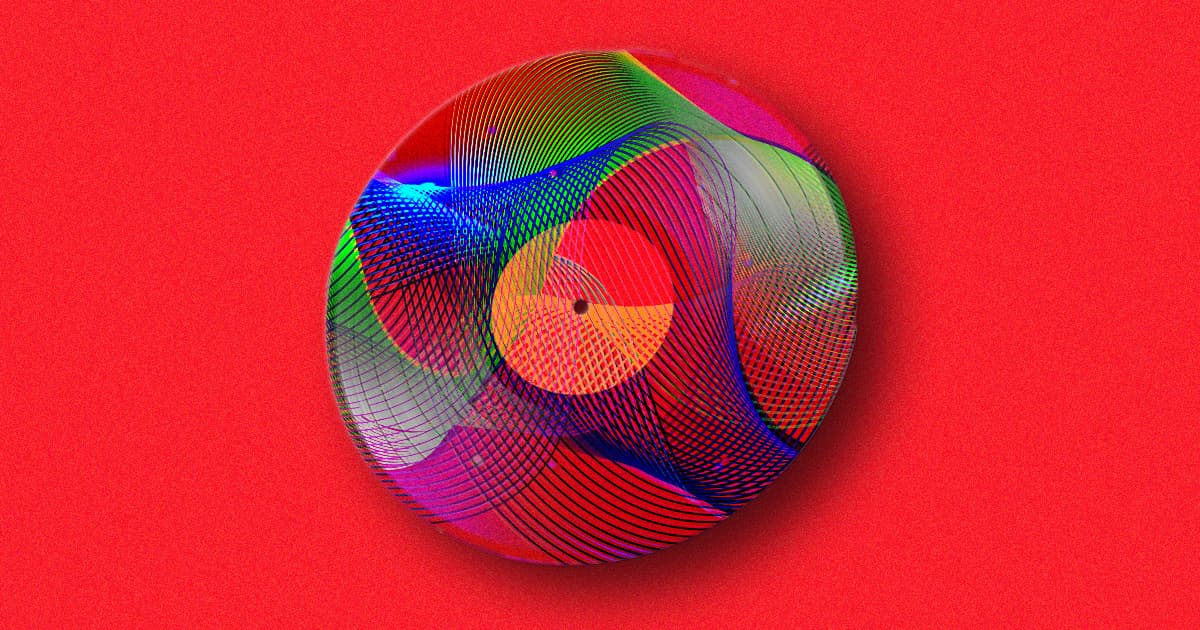 As artificial intelligence gets more powerful, it can give artists tools to create brand new mediums.

That was certainly the case with the high tech music duo DADABOTS, who earlier this year used a neural net to create a bizarre approximation of Frank Sinatra singing "Toxic" by Britney Spears.

The musical fusion was unsettling and delightful. Sounding neither quite like Sinatra nor Spears, it genuinely seemed as though the neural net had created something brand new. But then, with no warning, YouTube took it down — sucking the AI-created ditty into the bureaucratic world of automated copyright disputes.

"We're all really curious what this means for algorithmic music," CJ Carr, one of the two members of DADABOTS, told Futurism when the song first got removed. "Are we on the frontlines of legitimate creative fair use? Are we the canary in the coal mine? Or is this still just a wide-open gray area for the future to delineate?"

The situation was unusual. To create the song, DADABOTS had used Jukebox, a neural net developed by OpenAI that was trained on thousands and thousands of songs that could either compose new tracks in an artist's voice and style or blend performers and genres together. Somehow, YouTube decided that either Frank Sinatra or Britney Spears had legal claim to the algorithm's creation, putting DADABOTS in the middle of a messy legal question about algorithmic art and media.

Specifically, YouTube had hit the video with a "copyright strike." That means someone had complained — and YouTube decided that DADABOTS had uploaded someone else's property, removing the video instantly.

It was a bit unclear who exactly had complained, though. Logically, it was probably by someone acting on behalf of either Sinatra or Spears. But in the baroque system of online copyright management, nothing is that simple.

The strike itself had been filed by an anti-piracy firm called GrayZone Inc. But GrayZone never acknowledged Futurism's repeated request for comment. Neither did Michael Erlinger Jr., the lawyer who handles copyright infringement for the Sinatra Estate, nor Samuel Ingham, Britney Spears' personal attorney. Sony Music, which owns the label to the Britney Spears album containing "Toxic," denied any involvement with the strike or knowledge of the new monetization arrangement. YouTube's legal team declined to comment or answer questions.

Friedman and McLain hypothesize that GrayZone automatically scraped YouTube for potential violations and decided the song infringed on Sinatra's intellectual property, making this a legal battle initiated by, fought over — and, for all we know — decided by algorithms.

"I imagine GrayZone's model is to blindly send out takedowns knowing most people don't refute them," Carr told Futurism. "Bots versus bots! Sinatra has no copyright on what we made; it's merely 'in the style' of Sinatra which is not an infringeable offense."

"Even if the courts were to find it to be a non-literal copy of a Sinatra song, it's a transformative machine learning product used for nonprofit educational purposes, so it's protected by fair use," Carr added.

Despite its unusual nature, the legal team approached the case as they would any other.

"There's always the case in law where you can look at previous decisions that have been made and find it in some way analogous, but there's never been anything like this before," Friedman told Futurism. "As we formulated our arguments, I don't think we ever said 'Oh there's this really similar issue we can copy.'"

Thankfully, her and McLain's arguments didn't focus on the nature of AI, the novelty of Jukebox, or technology at all. Their case hinged on the song itself — the way it was composed was irrelevant.

"Essentially what it all came down to was just applying fair use," Friedman said. "When you remove the fact that it's this machine learning-generated content, whether or not that's the case, you can apply fair use to this."

Friedman and McLain prepared a legal argument that the song constituted fair use of the human artists' work, and DADABOTS uploaded it to YouTube's appeals platform. The argument convinced YouTube to reverse its decision, and it restored the video. Finally, in early November, DADABOTS got notice from YouTube that the song is now considered a Britney Spears cover track — they would need to share ad revenue with Spears' label if they ever monetized it.

Unfortunately, Friedman and McLain's work and research are unlikely to fill in the void of missing legal precedents. The entire legal battle happened within YouTube's appeals process — a platform ill-suited for establishing guidelines for actual civil cases down the road.

At no point during the process was there any indication as to why YouTube made a given decision or even that a human had reviewed the case.

"I think that it's quite disappointing that the YouTube process is so closed off because of the fact that it's always going to be difficult to argue precedent if we never have any," Friedman said. "If YouTube is just making these decisions and never informing people how they're reaching these decisions, then no one's ever going to know the approach they should take."

Without a public-facing legal decision, it remains difficult to inform or advise anyone else exploring the ways that AI tech can help create new art, especially given how rapidly the field is developing.

Some other algorithmically-generated music has fallen prey to copyright claims. For instance, there was a deepfake of Jay-Z performing "Hamlet" and singing Billy Joel's "We Didn't Start the Fire" that was removed by YouTube and another Jukebox project where someone created a Pink Floyd fan album that was struck down by British Recorded Music Industry Limited.

But none of these three cases are exactly the same, so any lessons gleaned from one may not apply to creators inspired by another or going about algorithmic music composition their own way.

Friedman intends to publish a guide for creators to help them navigate this poorly-defined legal space, offering up tips like saying tracks are "in the style" of an artist rather than "performed by" them. It also helped DADABOTS, specifically, that they didn't try to monetize the video and instead generated it for research purposes.

"This issue is still in its infancy, obviously," McLain said. "There's going to be a case down the line where someone like [OpenAI's] Jukebox has begun to monetize and there starts to become a market for these songs. The owners of the copyright data that is used to train those works, create those works, they're going to have a lawsuit it's going to be fascinating to see the outcome. Whether the defense is going to be the fair use doctrine or if they're going to be able to have copyright ability in the works those machine learning algorithms create."

"It's going to be an outcome that will be fascinating to see someday," McLain added, emphasizing that these issues may not get sorted out any time soon.

For now, the legal issues hinge on how copyrighted material is used to train an AI by human operators — legal precedent suggests that the algorithm itself can't claim copyright on its output, and Friedman suggests that won't change until someone figures out artificial general intelligence.

YouTube's closed doors and the shroud of mystery blanketing the motivation behind the copyright strike make it difficult to call this a landmark legal case on the intersection of AI and copyright law. But DADABOTS is still chalking up the experience as a victory for creators.

"Awesome outcome," Carr said. "Hope this result emboldens AI creators as much as it does us. Unstoppable!"

Read This Next
Singularity Thoughts
Neuralink Co-Founder Predicts That Humanity Will Get "Wrecked"
Futurism
Crime-Fighting AI Put a Guy in Jail for a Year With Little Evidence
Brands We Love
Collaborate With Anyone, Anywhere with This Online Recording Studio from Spotify
Brands We Love
Put Music at Your Fingertips With a Lifetime Subscription to Pianu Pro
Brands We Love
If You've Been Neglecting Your Home Audio, It's Time For High-Tech Sonos Speakers
More on Future Society
I Silence Thee
Yesterday on futurism
Leaked Messages Seem to Show Elon Musk Using Twitter to Punish His Enemies
Gas Giant
Friday on the byte
Journalist Eats Lab-Grown Chicken, Gets "Weirdly Gassy"
Musk Rats
Thursday on the byte
Twitter Is Quietly Re-Suspending the Lunatics Elon Musk Let Back On
READ MORE STORIES ABOUT / Future Society
Keep up.
Subscribe to our daily newsletter to keep in touch with the subjects shaping our future.
+Social+Newsletter
TopicsAbout UsContact Us
Copyright ©, Camden Media Inc All Rights Reserved. See our User Agreement, Privacy Policy and Data Use Policy. The material on this site may not be reproduced, distributed, transmitted, cached or otherwise used, except with prior written permission of Futurism. Articles may contain affiliate links which enable us to share in the revenue of any purchases made.
Fonts by Typekit and Monotype.