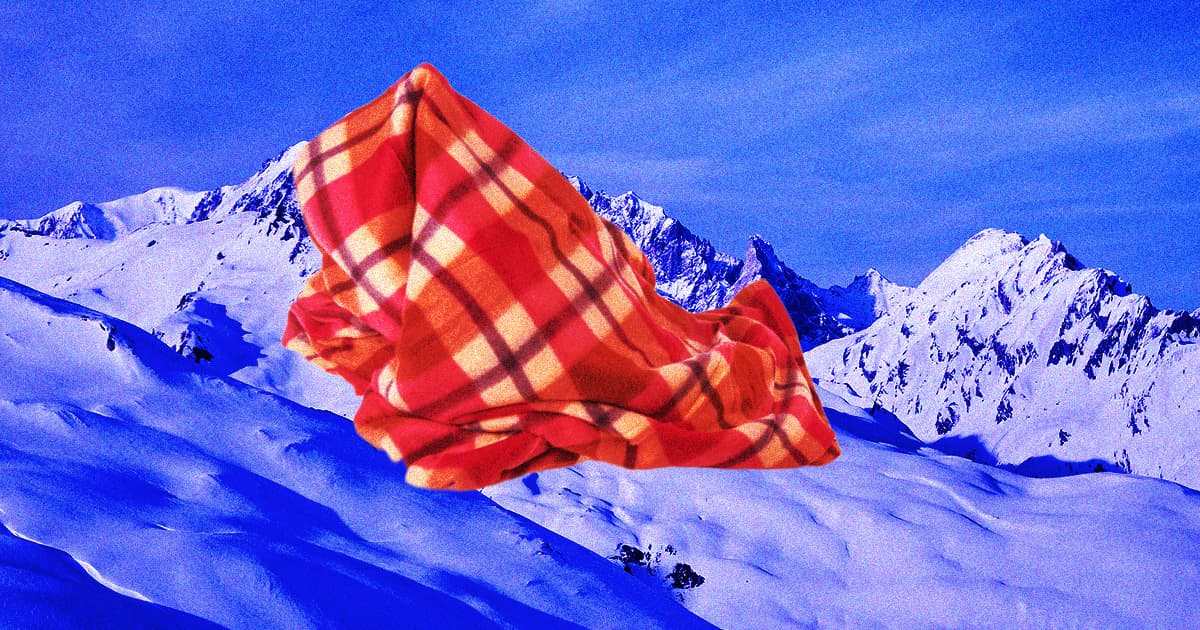 Switzerland Covers Glacier With Giant Blankets to Keep It From Melting

It's a desperate situation.

It's a desperate situation.

A giant glacier on Mount Titlis in Switzerland has shrunk drastically in recent decades, thanks to global warming.

Officials from a local skiing resort are now trying to slow the melting by throwing giant fleece blankets over the glacier, covering a cumulative area just over a million square feet, or around 14 soccer fields, according to Reuters.

The goal is to insulate the vulnerable glacier's ice and snow deposits by reflecting much of the Sun's energy back into the atmosphere using the white material.

It's a desperate situation — and yet another instance of global warming rearing its ugly head — that poses an existential threat to local industries. According to the Swiss government, 90 percent of Mount Titlis' remaining 1,500 glaciers will disappear by 2100 if greenhouses gas emissions aren't cut, Reuters reported.

According to local officials, the size of the fleece blankets had to be steadily increased over the last couple of years to have enough of an effect. Workers had to meticulously sew blankets together and cover the glacier over five to six weeks this summer to slow its melting.

The effects of global warming are being felt across the world right now, with monster storms drenching much of North America and devastating wildfires lighting up the Pacific Northwest.

So it doesn't come as a surprise that ski enthusiasts will soon have to travel further to find slopes with the right conditions — if, that is, there's any left at all.

Sun Shield
Scientists Increasingly Calling to Dim the Sun
11. 23. 22
Read More
Coastal Chaos
The Doomsday Glacier Is Hanging on "By Its Fingernails," Scientists Say
9. 7. 22
Read More
Tornado Watch
Tornadoes Like Kentucky's May Be Getting Stronger Due to Climate Change, Scientists Say
12. 12. 21
Read More
+Social+Newsletter
TopicsAbout UsContact Us
Copyright ©, Camden Media Inc All Rights Reserved. See our User Agreement, Privacy Policy and Data Use Policy. The material on this site may not be reproduced, distributed, transmitted, cached or otherwise used, except with prior written permission of Futurism. Articles may contain affiliate links which enable us to share in the revenue of any purchases made.
Fonts by Typekit and Monotype.