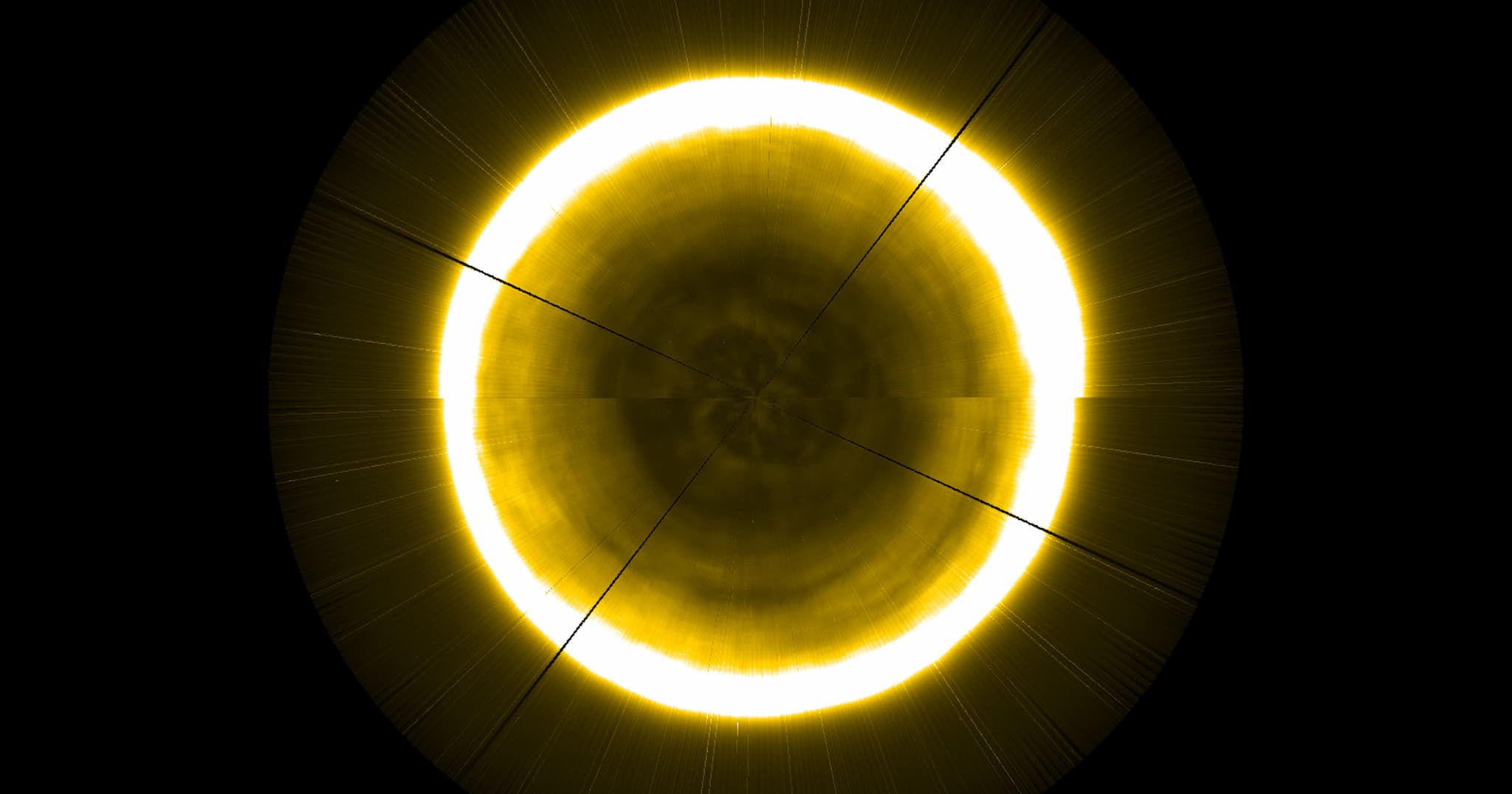 They used existing data to fill a gap in our solar knowledge.

They used existing data to fill a gap in our solar knowledge.

View From the Top

We don't have any actual images of the Sun's north pole, but that's doesn't mean we can't figure out what it looks like.

On Monday, a team from the European Space Agency (ESA) released an image of what they believe the Sun would look like if we viewed it from above its north pole — and they have solid data to back it up.

Previous missions to study the Sun, such as the ESA’s Proba-2 satellite and NASA’s SDO craft, have focused on the latitudes near the star's equator. The only mission to directly explore the Sun's poles was Ulysses, a joint mission between the ESA and NASA, and that craft didn't include any imaging equipment.

That meant the ESA team would need to get creative if it wanted to figure out what the Sun's north pole looked like.

First, they gathered data taken by an instrument aboard Proba-2 known as the Sun Watcher using Active Pixel System detector and Image Processing telescope. Then, they painstakingly pieced that data together in a way that would allow them to "see" the Sun's north pole.

We won't have to wait too long to find out whether or not the ESA team's image jives with reality. In February 2020, the ESA plans to launch its Solar Orbiter mission. Unlike previous missions, this spacecraft will take high-latitude images of the Sun, providing scientists with a direct view of its poles.

Those images have the potential to help scientists answer a number of lingering questions about the Sun. But until they arrive, this extrapolated image can serve as a useful stand-in.

READ MORE: This Is What the Sun’s North Pole Looks Like [Motherboard]

More on studying the Sun: NASA Just Launched a New Space Probe That Will Venture Closer to the Sun Than Any Craft Before It

Water Canyon
Scientists Spot Hidden Water in Mars' Grand Canyon
12. 15. 21
Read More
Star Stream
Something Is Ripping Apart the Nearest Star Cluster to Earth
3. 25. 21
Read More
Satan's Butthole
The Sharpest-Ever Image of a Sunspot Looks Like a Portal to Hell
12. 4. 20
Read More
+Social+Newsletter
TopicsAbout UsContact Us
Copyright ©, Camden Media Inc All Rights Reserved. See our User Agreement, Privacy Policy and Data Use Policy. The material on this site may not be reproduced, distributed, transmitted, cached or otherwise used, except with prior written permission of Futurism. Fonts by Typekit and Monotype.