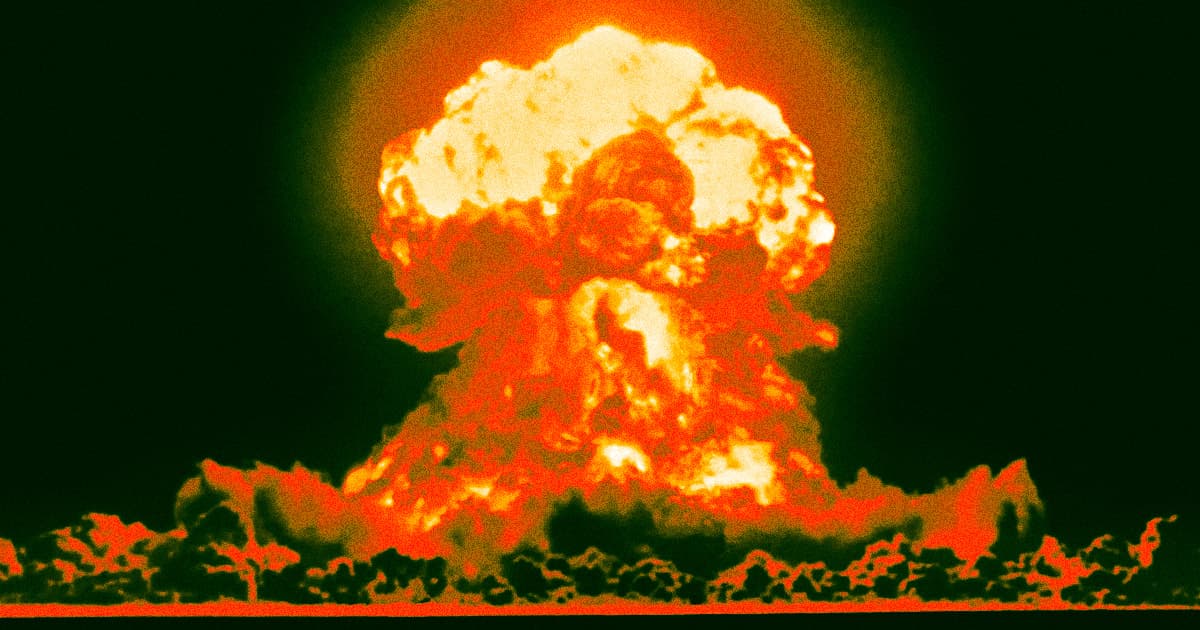 "People should stay away from these locations and immediately take shelter."

"People should stay away from these locations and immediately take shelter."

In the event of a nuclear blast, let's face it: you're probably screwed. Fortunately, the good researchers at the University of Nicosia decided to simulate a nuclear bomb explosion to see how it would affect people taking shelter indoors, and while the results may be grim, their findings just might increase your odds of surviving.

For the study, published this week in the journal Physics of Fluids, the researchers focused on a 750 kiloton nuclear warhead detonated almost two miles above ground, delivered by an intercontinental ballistic missile.

Anyone caught in the over half a mile in radius fireball wouldn't stand a chance, dying instantly. Not much to look into there, but it's the ensuing shockwave that extends beyond the initial blast where things get interesting. It's called the moderate damage zone (MDZ), and here your odds are better, but not by a whole lot.

In just ten seconds, a pressurized shockwave would extend nearly 3 miles in radius, bringing with it roaring winds that, together, would topple less resilient structures and likely kill anyone unlucky enough to be caught outside. On the other hand, concrete structures and otherwise sturdy structures might take a few licks but would mostly remain standing.

Logically, your odds of survival would be better inside a sturdy building, but it's not as straightforward as that.

"Before our study, the danger to people inside a concrete-reinforced building that withstands the blast wave was unclear," explained study coauthor Dimitris Drikakis in a press release. "Our study shows that high airspeeds remain a considerable hazard and can still result in severe injuries or even fatalities."

Those vicious winds will invade through windows and doors and become even stronger as they storm through corridors and narrow spaces, and likely so suddenly that you couldn't react. In a worst case scenario, those wind speeds can power up to over 400 miles per hour in the first ten seconds. If that or deadly debris doesn't kill you, the winds could still throw you around helplessly if you don't get to ground, turning your shelter into a particularly cruel bouncy castle.

However, those are the absolute worst case conditions, and luckily, there are some spots where you could avoid the brunt of the winds. And no, it's not the fridge.

"The most dangerous critical indoor locations to avoid are the windows, the corridors, and the doors," said fellow co-author Ioannis Kokkinakis.

"People should stay away from these locations and immediately take shelter," he added. "Even in the front room facing the explosion, one can be safe from the high airspeeds if positioned at the corners of the wall facing the blast."

Of course, you would still have to deal with the radioactive fallout, infernal fires sweeping the landscape, and near-total breakdown of social services. But hey, it's a starting point.

Faced With a Nuclear Blast? Here's What You Need to Do to Survive
8. 26. 17
Read More
New Video Reveals the Devastating Aftermath of a Nuclear Bomb
2. 2. 17
Read More
What is Happening
Elon Musk Sets His Twitter Account to Private
Yesterday
Read More
+Social+Newsletter
TopicsAbout UsContact Us
Copyright ©, Camden Media Inc All Rights Reserved. See our User Agreement, Privacy Policy and Data Use Policy. The material on this site may not be reproduced, distributed, transmitted, cached or otherwise used, except with prior written permission of Futurism. Articles may contain affiliate links which enable us to share in the revenue of any purchases made.
Fonts by Typekit and Monotype.